Del. Sally Hudson is eager to keep working on education, healthcare, climate and economic policy in a second term 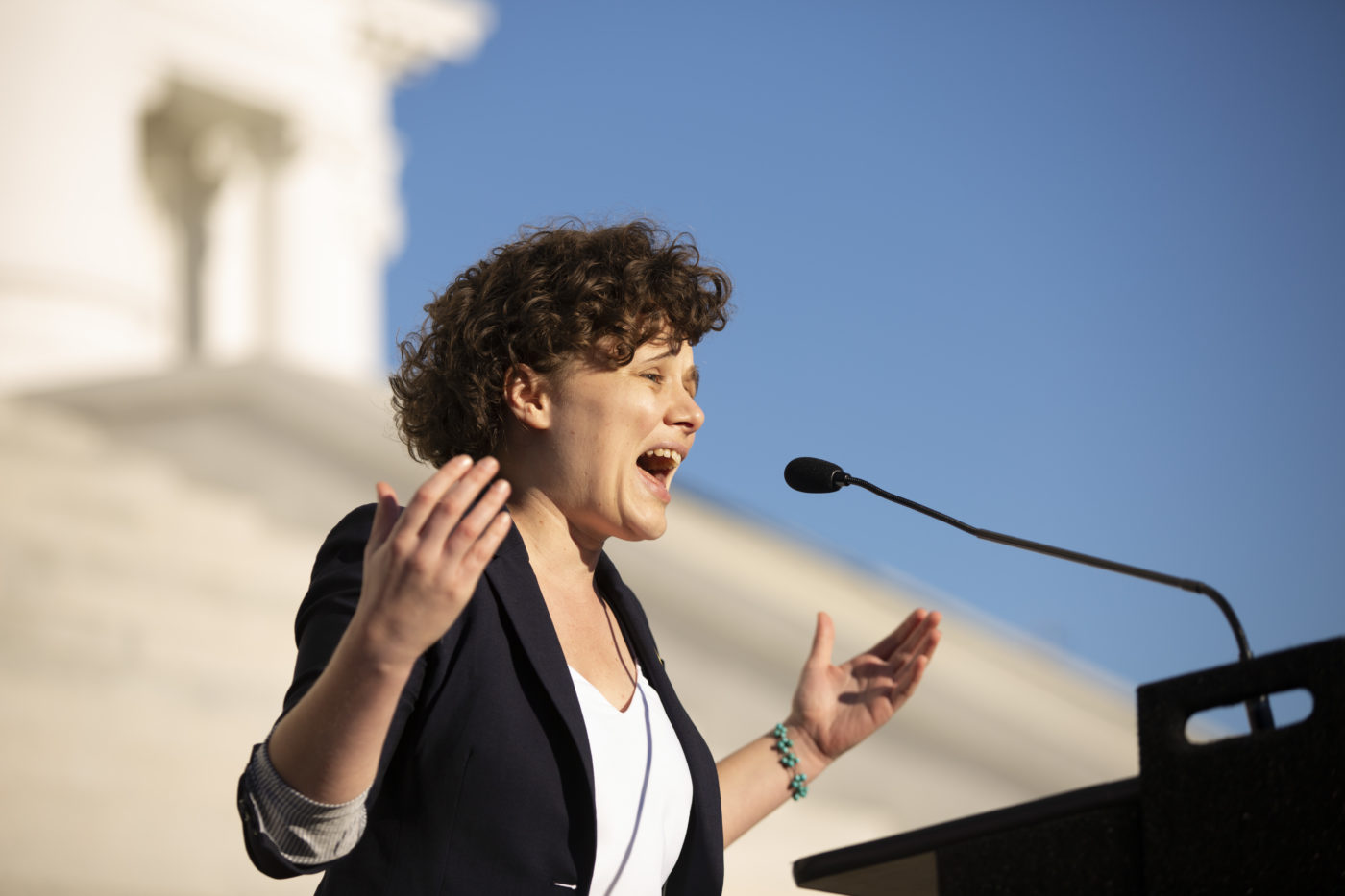 Del. Sally Hudson, D- Charlottesville, speaks at a rally in support of legislation to allow local governments authority over their monuments.

Del. Sally Hudson, an economist and University of Virginia professor, has represented Charlottesville and the 57th District since 2019. In seeking a second term, Hudson said that she’s proud of the work she and others in the democratic majority have been able to accomplish in the state and she’s eager to help the legislature prioritize education.

“The General Assembly’s top priority in the next administration has to be school finance reform,” she said.

She added that Virginia has been asking teachers and students to “do too much with too little for far too long.”

“It puts a huge burden on our local governments to fill the gap,” Hudson said. “Richmond has to put the state’s fair share into public education so that every child in every corner of Virginia can attend a strong school.”

She knows it will cost money and she said her background as an economist can help make it possible. Ideas include adjusting corporate tax codes to ensure that companies that do business in Virginia are paying “what they should” and closing loopholes that may disproportionately benefit bigger businesses.

Hudson said she is proud of the strides Virginia has taken in recent years regarding healthcare, like building on Medicaid expansion in her first term.

“We also passed a law to start up our own state health insurance exchange so we can build a system that better fits Virginia’s needs,” Hudson explained.

This August, the federal government approved Virginia’s application to pursue a state-based health insurance exchange. This was a priority for Hudson in her 2019 campaign. Appalled by price spikes some in the state experienced in 2017, Hudson knew if she was elected she planned to work on a statewide option for public health insurance.

“We had folks who maybe made just a little too much to qualify for Medicaid, or small-business owners and entrepreneurs or freelancers who didn’t have employer-sponsored health insurance who got rocked,” Hudson said. “As shocking as that was to many consumers, we shouldn’t have been surprised. Economists know that health insurance markets are designed to fail. It is the classic example of a product that the private market is not equipped to provide.”

The idea is moving closer to a reality for her, as the recent application approval puts Virginia on track to setting up its own market by 2023.

“Once we have our own market up and running, we can do even more, like roll out a state-based public option so that every Virginian can purchase coverage no matter where they work,” Hudson said. “That kind of change doesn’t happen overnight, but we’re well on our way.”

Another area of healthcare she plans to keep a focus on is abortion access. As the first woman to serve Charlottesville in the House, she’s especially proud to be a “champion for reproductive rights.”

Hudson carried a passing bill that repealed a ban on abortion coverage in the health insurance market and has been endorsed by advocacy group NARAL Virginia.

The passage of a controversial abortion law in Texas resurfaced debates surrounding them across the nation and within Virginia’s gubernatorial race.

The law bans abortions where a heartbeat can be detected (usually six weeks), makes no exceptions for rape or incest, and allows for healthcare providers or transportation providers to be sued for helping patient have an abortion. Hudson said it is important for her to not allow similar legislation to happen in Virginia.

“With reproductive rights under threat across the country, it’s all the more important that we protect those rights here at home so Virginia can be a safe haven for patients across our region,” she said.

On economic improvements, Hudson would like to see an expansion of childcare options and programs for paid family and medical leave to make it possible for workers who are “doing double-duty as caregivers” to maintain employment.

Hudson also wants to lower hassle and costs of doing business in the state.

“Right now, Virginia has too many inefficient agencies that slow business owners down with unpredictable permits and paperwork,” Hudson said. “Agencies like the Virginia Employment Commission need a wholesale overhaul so they can serve both employers and workers better.”

While the state is also poised to roll out a new legal market for cannabis by 2024, Hudson said that she’s glad the government is taking the time to “get it right” to ensure that local entrepreneurs in the state have a chance to get into the market.

“If we open the floodgates too fast, odds are the largest out-of-state vendors will rush in and set up shop before our homegrown ventures get a foothold,” she said. “We need to ensure that Virginia farmers, businesses, and especially our residents who’ve been harmed by past drug policies are first in line to engage in this new market.”

She would also like to protect consumer’s health and safety by making sure there’s regulation that products are tested fairly and labeled properly.

Hudson said that continued challenges she hopes to help the state tackle are combating climate change, holding utilities accountable for consumer protections and pushing them to create clean energy.

“With heat waves and flooding nationwide, it’s clear that the consequences are already here,” Hudson said. “I’ve been an outspoken advocate for clean energy and environmental protection in my first term.”

She notes the General Assembly’s efforts to get Virginia into the Regional Greenhouse Gas Initiative. She also supports the Virginia Clean Economy Act, which helps locally-based companies like SunTribe Solar, Sigora Solar and Apex Clean Energy by expanding the cap for power purchase agreements for renewable energy projects. Hudson also carried a bill to end government subsidies for coal production in order to invest that money into renewable energy.

“I’ve also helped lead a new wave of legislators to end the corporate culture in Richmond that lets utilities write all their own rules, and the [State Corporation Commission] just announced that our work will deliver historic refunds to Dominion Power customers,” Hudson said. “There’s a lot of work still left to do on that front, and we’re just getting started.”