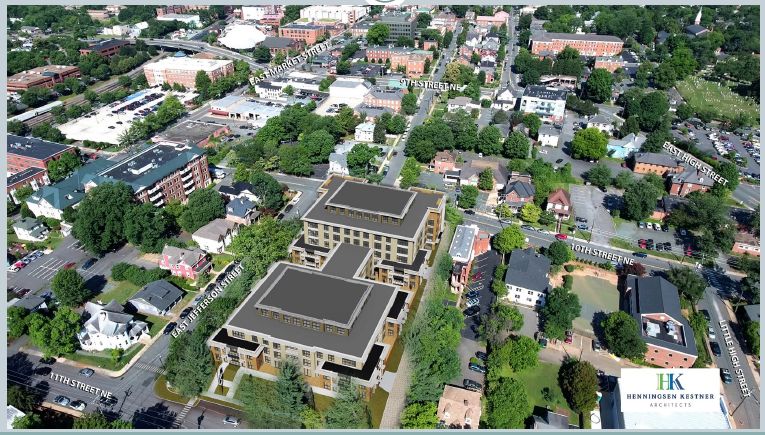 A divided City Council approved a special-use permit Wednesday for an apartment complex near downtown Charlottesville despite opposition from many who feel that the project is out of scale with the surrounding neighborhood.

“It is within walking distance of downtown, where our Comprehensive Plan envisions more urban and pedestrian-oriented development,” said Councilor Kristin Szakos, who joined Wes Bellamy and Mike Signer in supporting the project.

“We need to decide as a community whether we want folks living in the city where they can walk to work or, rather, if we want them to live in surrounding counties,” she added.

Councilors voted 3-2 to grant a special-use permit to the Jefferson Medical Building Limited Partnership to build up to 126 units on a 1.46-acre property at 1011 E. Jefferson St., where a two-story medical office currently exists. However, developers agreed to a condition requiring that for every 1,500 square feet of commercial space built, one residential unit will be reduced in number. Councilors Bob Fenwick and Kathy Galvin voted against the permit. Fenwick did so because of neighborhood concerns.

“They are very much concerned that one development, and one special-use permit on the same block as [the Charlottesville Day School] will quadruple the density of the current zoning,” Fenwick said.

The Planning Commission recommended denial of the permit on a 4-to-3 vote in October. New materials were submitted this June, but the underlying request for additional density had not changed.

“Continued interaction with staff and the neighbors have clearly lead to a much better design, massing and pedestrian-oriented proposal,” said Chuck Rotgin, of the Great Eastern Management Co. The development firm is a minority partner in the group of doctors that make up the partnership.

Another change made in the June submission was to allocate 10,000 square feet for commercial uses. That would mean a reduction in the number of housing units in the building. Another concession was to limit the apartments to one-bedroom and two-bedroom units.

Rotgin said that without the permit, the partnership could build a very large structure.

“We could put 31 residential units on that site plus about 135,000 square feet of commercial area,” Rotgin said.

“The by-right uses permitted at this property would generate significantly more vehicular trips than what is proposed,” Long added.

That proved to be a key factor for Mayor Mike Signer, who cast the deciding vote in favor of the permit.

“I do not want to be sitting here in six months after voting against this and then have a full-on, by-right commercial application here that adds a huge multiple to the traffic,” Signer said.

The majority of speakers at the public hearing called for the permit to be denied due to the additional residential density.

“The neighborhood feels that it is too dense and that it is too many people being added in,” said George Gilliam, a former city councilor and a resident of the Randolph building at 210 10th St. NE, a block away from 1011 E. Jefferson St.

Many surrounding neighbors asked for the request to be rejected.

Not all speakers at the public hearing were opposed to the project. One man said not granting the permit would just lead to middle-income people seeking places to live in low-income neighborhoods.

“The community also includes the hundreds of people who wish they could live downtown but can’t because current residents are holding the land hostage,” said Luke Juday, a resident of Rose Hill Drive. “We can be an open and accepting city that makes room for everyone and encourages environmentally sustainable ways of life, or we can cater to homeowners’ fears.”

Under the terms of the city’s affordable housing ordinance, four of the units will be rented to families or individuals who make less than 80 percent of the area’s median income. Unlike most other developments, Great Eastern Management Co. is proposing to build them on-site, rather than pay into the Charlottesville Housing Fund.

That did not impress Walt Heinecke, of the Kellytown neighborhood, who said many in the city are “ticked off” about development in the city.

“When by-right means developers have the right to ruin the quality of our neighborhoods, maybe that right needs to be re-examined,” Heinecke said.

“There’s no real affordable housing here in this project,” he added. “Four units. That’s nothing.”

City Councilor Wes Bellamy took issue with both Campbell and Heinecke’s comments. He bought his first home last August but rented when he initially moved to the community in 2009.

“When I hear some individuals say things like, ‘Renters don’t care about their community,’ it makes me think if that’s the case, how are we going to grow the next generation of leaders?” Bellamy asked.

Bellamy also said children who might end up in those four units may have their lives transformed by growing up in a mixed-use community.

Rotgin said the intention is to build the four units as part of East Jefferson Place, but that may not be possible. Rather than pay into the fund, Rotgin said the units could be made available at Tarleton Square, which is managed by GEMC.

Galvin said she could not support the permit because she felt it violated the Comprehensive Plan. The future land-use map in that document designates the property as being for neighborhood commercial uses and smaller buildings.

“This is a rare instance, my colleagues, where our land management policy actually defines and maps appropriate uses and form within a transition zone,” Galvin said. “Yet, we are asked to ignore it. If we do not use what few long-range planning tools we have, then our Comprehensive Plan fails and our future will be shaped bit-by-bit by private speculative interests.”