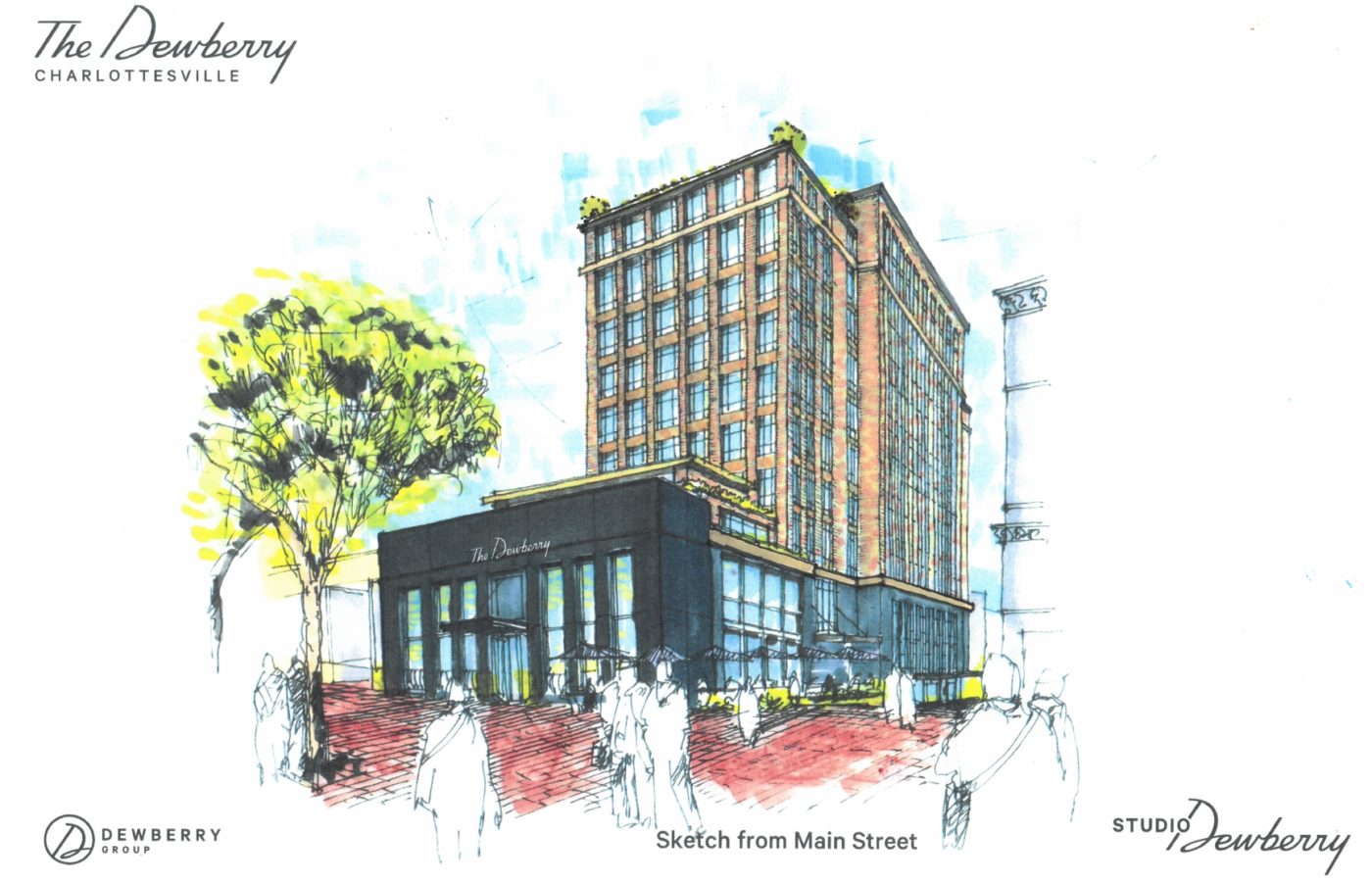 Sketch of the proposed Dewberry Hotel

Plans to turn the skeletal Landmark into a world-class hotel inched forward this week when the city’s Board of Architectural Review approved the height and massing for the Dewberry Charlottesville, as the property now is known.

“We are requesting to add an additional story on top of the existing building that is there now based on the height modifications in the zoning code that the Landmark did not take advantage of,” said Lockie Brown, vice president of design for Studio Dewberry, the design arm for Dewberry Capital.

Construction of the building was abandoned in 2009. The property was sold at auction to Dewberry Capital in 2012 for $6.25 million. The company is led by John Dewberry, a Waynesboro native who became a developer after a stint as a quarterback at Georgia Tech.

Dewberry bought the property to be the second in a planned series of boutique hotels. The first opened in Charleston, South Carolina, in 2017 after Dewberry spent several years restoring a former federal building.

“If you look at the Dewberry Charleston, which has been operating now for roughly 15 months, we’ve been rated the No. 1 [lifestyle] hotel in the United States by [Hospitality Design] magazine,” Brown said.

Dewberry has sought several concessions from city officials to get the project moving forward. The City Council voted 4-1 in March 2017 to grant $1 million in tax breaks over 10 years, but a second vote on the matter in December overturned that decision.

“There have been no further efforts to revisit the performance agreement,” said Brian Wheeler, city communications director.

Dewberry Capital is proceeding with the project anyway.

“The hotel design formerly known as the Landmark was originally approved by the BAR in 2004 with subsequent approvals in 2007 and 2008,” said Jeff Werner, the city’s historic-preservation planner. “The new massing would be for a building height of 117 and a half feet with a 16-foot appurtenance.”

Appurtenances are the tallest sections of a building that are restricted to a quarter of the structure’s total footprint. City Council has since eliminated the use of this term from the zoning code in favor of the phrase “rooftop structure.”

In this case, no residential uses are proposed. Instead, the appurtenance is intended to screen mechanical equipment from view.

An April 2017 letter from the city’s director of neighborhood development services confirms that the additional height and massing would be consistent with the city’s zoning code.

Under this new design, there would be two floors immediately above the black granite facade that currently juts out from the skeletal structure.

“The zoning letter showed different ways in which to do the stepbacks,” Brown said.

Brown said the additional building space would allow for there to be 17 more rooms than in the original Landmark plan.

While the BAR approved the request, one member expressed frustration that little seems to have changed in the design since it last went before the panel in June.

“It looks like you’ve put about 15 minutes of work into it since the last time we saw you,” said Carl Schwarz. “That’s disheartening considering that we’ve been waiting for a decade for this thing to get done.”

Schwarz said he did not think an additional story would make much difference.

“It sounds like you guys found a loophole and the deputy attorney is OK with it because it meets zoning,” he said.

One member of the audience asked the BAR to deny the additional height.

“The entire city has been anxiously awaiting something to happen to that,” said Maria Chapel. “[Demolishing] it in my estimation would have been the best thing. It is ridiculously high now, so to make it any higher would be terrible.”

However, BAR members said they felt their hands were tied by the zoning determination.

“When I look at the street elevations, it seems totally out of scale and out of character,” said Corey Clayborne, the city Planning Commission’s representative on the BAR. “I’m not sure if there is anything we can do about the new height with the determination that has been given.”

Clayborne was the lone vote against the massing and height.

The project still needs a final certificate of appropriateness from the BAR.

Brown said he could share no information about the timeline for how Dewberry will proceed. However, he did say meetings have been held with city officials to prepare for a plan to add retail establishments on Second Street Southeast.

“We were here about a month ago and met with the fire marshal, civil engineers and utilities folks from the city to try to work through what it would take to activate Second Street and still maintain the fire access through there,” Brown said. “In the future, there will be some proposals about that.”