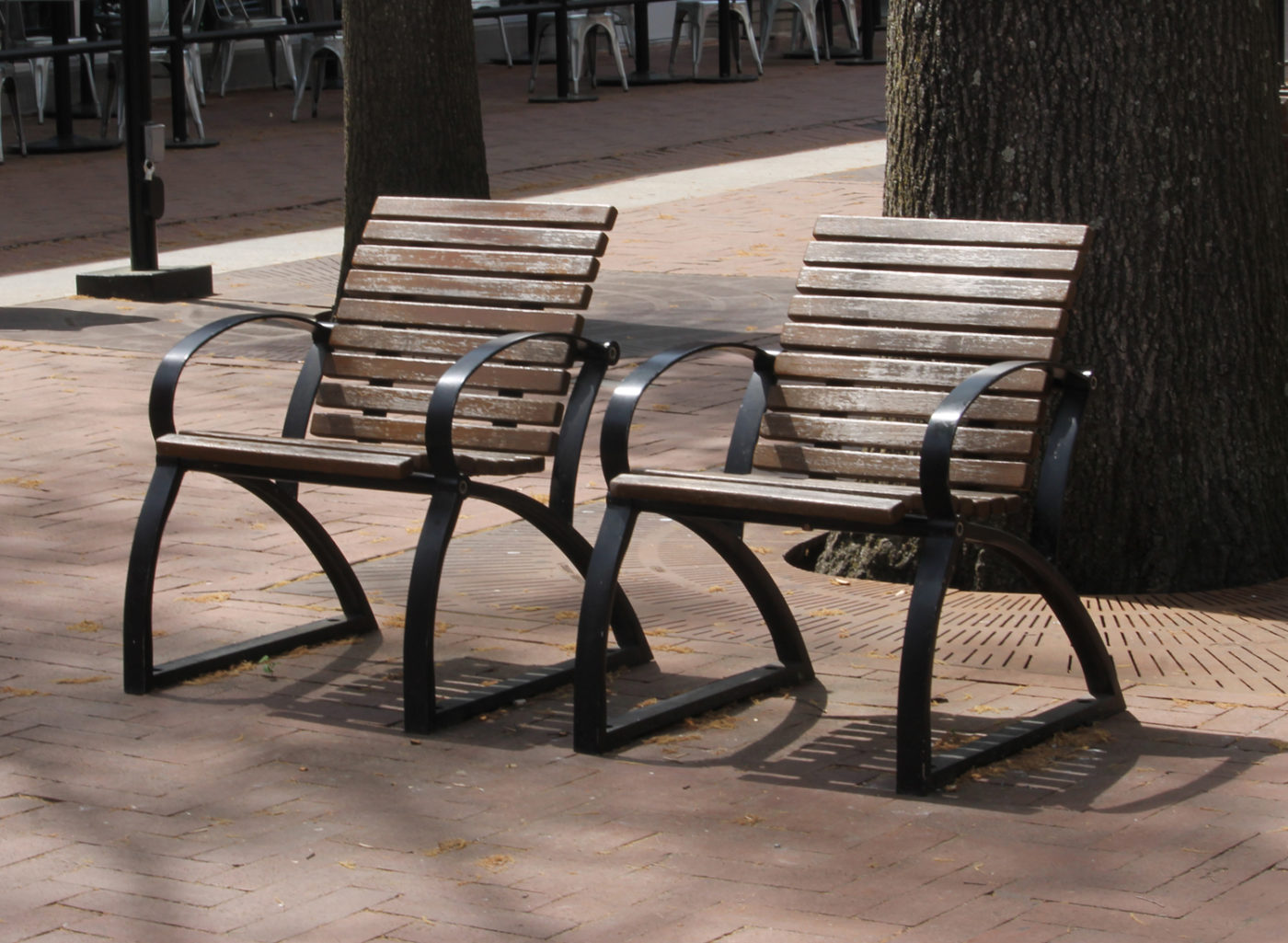 Charlottesville’s Board of Architectural Review has denied a request from the Parks & Recreation Department to replace existing wooden seats on the Downtown Mall with metal ones without backs.

At issue is whether making the change would alter the intent of the 1970s-era design of famed landscape architect Lawrence Halprin.

“I feel strongly modifications to the mall need to honor the intentions of the Halprin design, and I do feel that the backed chair is a significant part of that,” said Breck Gastinger, a landscape architect appointed to the BAR earlier this year.

The parks department was last before the BAR in April 2016 to make the request. At the time, the BAR requested that more research be done to see if a replacement with a back could be found instead.

“No matter what is selected, I do not have the money to buy it and I have these black backless benches in stock,” said Doug Ehman, the manager of the city’s parks division.  “I also ask for a reconsideration request that we be able to use the existing ones because my current wooden chairs that are on the mall continue to decline.”

The black metal of the chair is considered appropriate under design review guidelines for the mall.

“However, they are backless to discourage loitering,” said Camie Mess, a historic preservation assistant with the city. “The question is whether the original Halprin chair design is significant enough to the overall mall design to be maintained.”

Ehman said the backless benches would be an interim measure until the parks department can receive funds to purchase something in line with what the BAR has requested.

He said several seats were removed in 2013 near Central Place due to public safety concerns, adding that he has identified three other locations on the mall where new public seating could be located.

“There’s really not a lot of space once you take out the fire lanes and the vendor locations,” Ehman said.

However, BAR members were concerned that allowing the request would set a precedent.

“The concern is that if we put this in as a temporary measure, they’d stay there forever,” said BAR member Stephen Balut.

Ehman said his preference would be for the BAR to select a chair style so he could proceed with finding funds.

“And then as we go through and maybe identify some funding sources, we could start to pull some of the black ones out,” he said, adding he would hate to replace the original Halprin chairs around the carousel with the backless benches in stock.

The 2009 renovation of the mall saw the creation of a fire lane that eliminated possible places for benches. However, a fire on the mall last year illustrated why access for public safety vehicles is important, and it resulted in several benches being taken away.

Beth Meyer, a professor of landscape architecture at the University of Virginia, sent a letter to the BAR, asking them to deny the application.

“I strongly oppose this proposal,” Meyer wrote. “It is inappropriate for a significant design landscape that is no doubt eligible for the National Register of Historic Places given the other Halprin projects that have been recently listed such as the Portland Open Space Sequence.”

Meyer said the public space of the mall has been privatized over the past 40 years and the new public benches would be uncomfortable, violating Halprin’s spirit.

“Without proper benches, one of the most important features of the mall is missing,” Meyer added.

Either way, one BAR member said the historical record of the mall should be kept intact.

“We need to have some seating arrangements that refer to what the mall originally had from a historic research standpoint,” said BAR member Tim Mohr.

BAR members suggested that if funding is an issue, City Council could find a way to fund infrastructure upgrades on the mall to keep it as a public space.

“There’s not a lot of seating out there unless you want to buy a coffee or buy a meal,” said Carl Schwarz. “The chairs that are there are used a lot.”

The BAR was unanimous in denying the parks department’s request.

“The city’s responsibility is the public realm,” said BAR member Emma Earnst. “We’re here, charged with dealing with the private sector, but we’re supposed to be representing the public. We really need to hold the city to a much higher standard than what we require of private citizens, in my opinion.”