BAR gets first look at plans for expanded Landmark Hotel 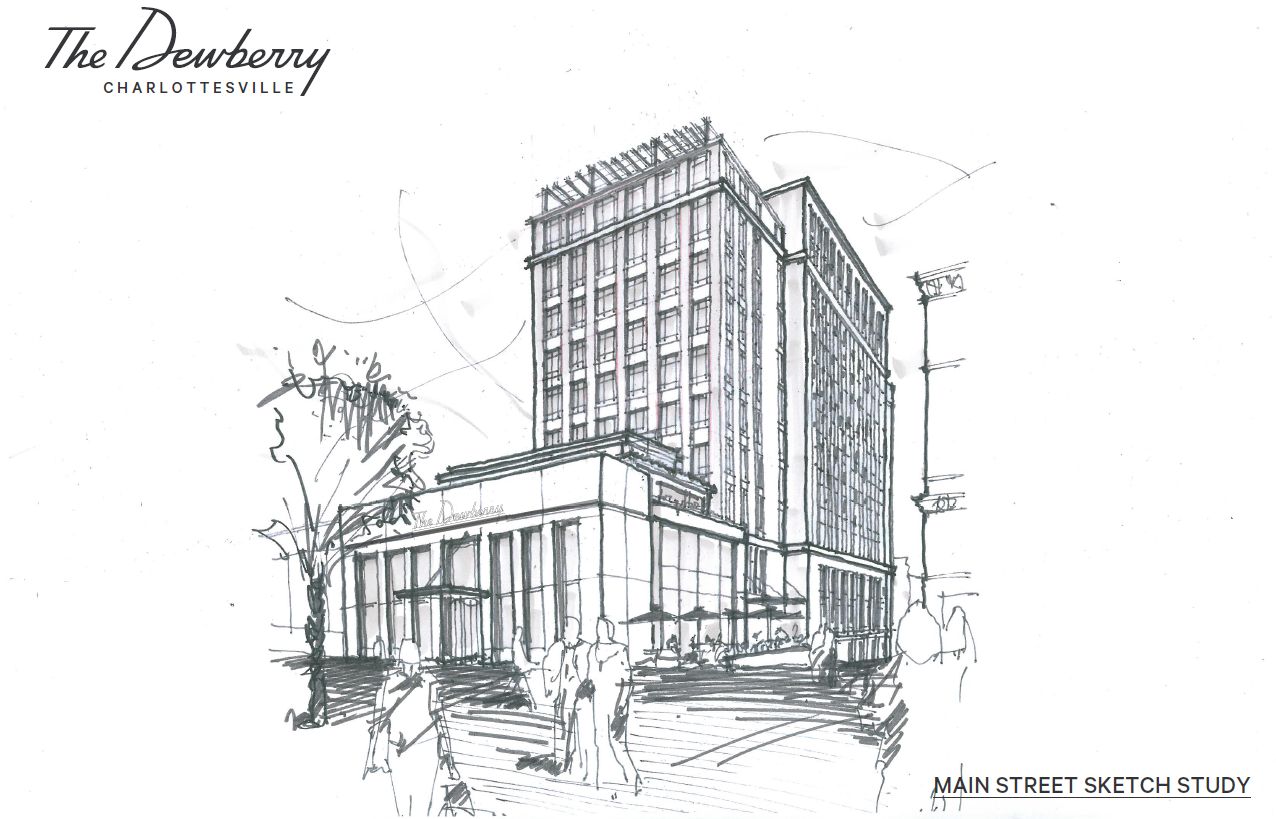 Sketch of the Dewberry Charlottesville for June 20, 2017 BAR meeting

The Charlottesville Board of Architectural Review heard details Tuesday on how the developer of the Dewberry Charlottesville hotel plans to add more floors to what has been previously known as the Landmark Hotel.

“They are proposing three additional stories or levels added above the two story section that fronts on the Downtown Mall,” said Mary Joy Scala, the city’s historic preservation planner. “A new tenth floor adds rooms to what had been a mechanical area and a new eleventh floor adds an enclosed bar and terrace.”

The discussion Tuesday was a preliminary one. Brown said the design could come back to the BAR in a couple of months.

“No decision will be made tonight on anything,” said Melanie Miller, chair of the BAR.

Dewberry, a Waynesboro native, had promised he would turn his attention to the Charlottesville project upon completing another hotel in Charleston, South Carolina.

The L. Mendel Rivers Federal Building in Charleston has now been converted into the first Dewberry hotel; Charlottesville’s skeletal structure is to be the second.

“The hotel design was originally approved by the BAR in 2004 with subsequent approvals in 2007 and 2008,” Scala said.

The plans for the hotel envision an increase to 112 rooms over the 100 that had been originally proposed.

The additional space is allowed under the city’s zoning code, according to Lisa Robertson, the city’s deputy attorney.

A new certificate of appropriateness and site plan are required before construction can begin.

“We have endeavored at an in-house level to work through all the zoning amendments and so we’re here to discuss all of that,” said Lockie Brown, vice president of design for development company Dewberry Capital.

The main entrance to the hotel will be on Water Street. The Main Street side will enter into a dining area. The hotel will include retail entrances on Second Street NE.

Scala said the applicant is pursuing purchasing a portion of right of way on Second Street from the city. The BAR was asked to provide input on that idea.

The Landmark had planned to use Second Street as a service entrance, but Brown said the idea now is to turn the space into something more open to the public.

That met the favor of one member of the BAR.

“I think it would be fantastic if someone could carve that into something interesting,” said Carl Schwarz.

Brown said a structural report has been conducted and the engineer said the existing building frame can be used.

“We’ve gone through this process before,” Brown said. “We are in the process of trying to evaluate all of the vertical circulations that are there. We will be using a totally different mechanical system than what they had before.”

City Council had explored ways to condemn the property in early 2016 but voted 4-1 in early March to grant tax incentives that Dewberry had requested.

According to the terms of an incentive plan, Dewberry could receive over $1 million in tax breaks over a 10-year period if the hotel opens by July 1, 2020.

Officials estimate the city could see $8 million to $9.5 million in tax receipts from the property during that time.

Building materials have not been submitted yet, but Brown said his team is exploring a blonde brick as the main component.

Independent City Council candidate Paul Long used the public comment period at the beginning of the meeting to speak out against the project.

“[Dewberry] has taken much too long to complete the project and I think any consideration at this point should be denied,” Long said. “I believe the skeleton has been a disgrace and should be demolished. The city should condemn that property and sell it for development.”

The BAR approved a request at the meeting to allow dark railings on the patio at Hardywood brewery on West Main Street rather than the silver ones that had been expected. They also gave approval for a rooftop patio deck at Oakhart Social, at 511 West Main Street, and a mural at 1515 University Avenue.

The BAR looked unfavorably on designs for a new roof for the Main Street Annex at 416 West Main that would add skylights to the building’s second floor. A work session on that topic will be scheduled for a future date.