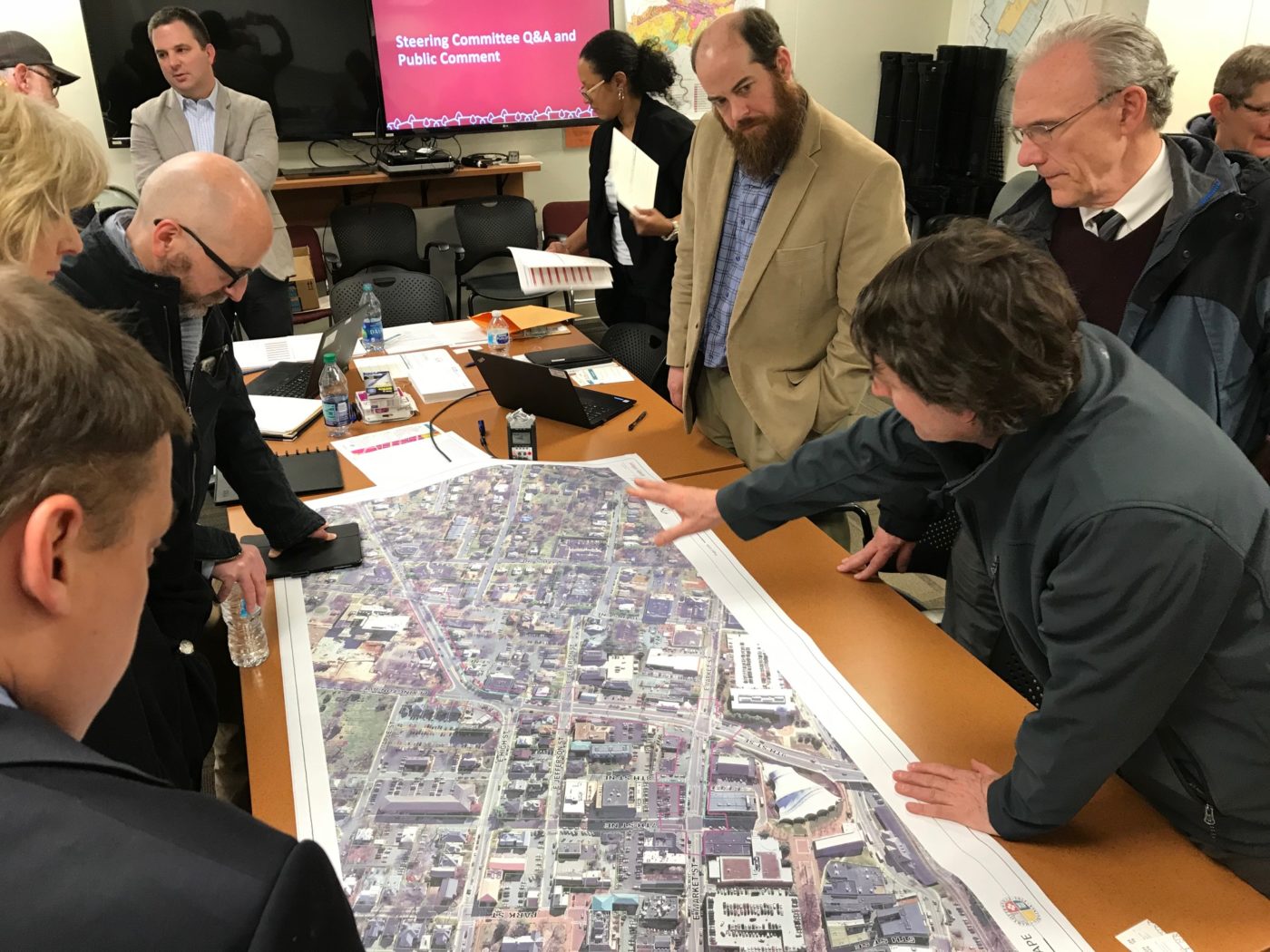 The public engagement process has begun for the first of three local streetscapes the Virginia Department of Transportation is funding through its Smart Scale process.

“The East High Streetscape is a project that had its beginning in the Strategic Investment Area plan, which was adopted five years ago,” said Timothy Motsch, transportation project manager for the city of Charlottesville. “You will see a lot of the same documents and design elements that are really just a starting point for discussion.”

The Commonwealth Transportation Board awarded Charlottesville $5.63 million to the project in June 2016 in the first round of a new process where projects are selected after being ranked on a series of criteria. The city also was awarded funding for similar projects on Emmet Street and Fontaine Avenue.

Kimley-Horn has been hired to design the East High project and to conduct the public engagement process. The same firm is designing the Belmont Bridge replacement.

“The Belmont Bridge project is going to construction within 12 or 18 months,” said Brian McPeters, a project manager with the company. “We’re going to have to be sure the two phases interact.”

Motsch said the design phase will proceed through the end of 2019 and, afterward, any necessary right-of-way acquisition would begin.

“In late 2020, we will be advertising for a contractor to do the work,” he said. “The design has not started. They have been doing surveys and traffic studies, but will not begin the design until this first part of public outreach is finished.”

One item to be considered will be whether utility lines will be placed underground. VDOT will not fully cover the cost of doing so.

“You would still get the money you would get to move the poles but they won’t pay to underground them,” said Brennan Duncan, the city’s traffic engineer.

McPeters said one purpose of both projects is to set the stage for the eventual redevelopment of the area. One way to do that is to make the area more welcoming to people on foot or wheels.

“You will end up with a half-mile of pedestrian and bike improvements that did not exist,” McPeters said. “We have a four-lane cross-section that we can hopefully repurpose and use asphalt in a different way to introduce plantings or wider sidewalks.”

However, McPeters said, the project also has to move vehicles through the area, as well.

“We can’t just ignore traffic operations and have to know where the pinch points are,” he said.

The study also will have to take into consideration the future of the corner of Ninth and Market streets. The city purchased property there for $2.85 million in January 2017 for possible use as a parking garage.

The study will also scrutinize whether the traffic light at the intersection at Seventh Street Northeast and East Market Street should be removed.

As an exercise, steering committees were asked to write down one word that describes the current conditions and a second to describe their vision. Hyphenated words were allowed.

“Disjointed” was the word used by Lena Seville to describe current conditions. She wants it to be “enjoyable” in the future.

Rosamond Casey, of the Little High Neighborhood Association, said “hodge-podge,” and then “tree-lined.”

Brian Menard of the Tree Commission said he wants the area to go from “challenging” to “engaging.”

The design team plans to use many of the same public engagement techniques that were used on the Belmont Bridge.

A “streetscape summit” is set be held from 9 a.m. to noon April 21 in CitySpace. An online survey will be conducted between April 14 and May 14. A design open house will be held in June, followed by presentations to city boards and commissions in August. A public hearing on the project is planned for the fall.

The two other streetscape projects are also moving forward.

The firm Clark Nexsen has been hired for the $12.1 million Emmet Street project, and a steering committee is in the process to being formed. RK&K are been hired to work on the $11.7 million Fontaine Avenue Streetscape.