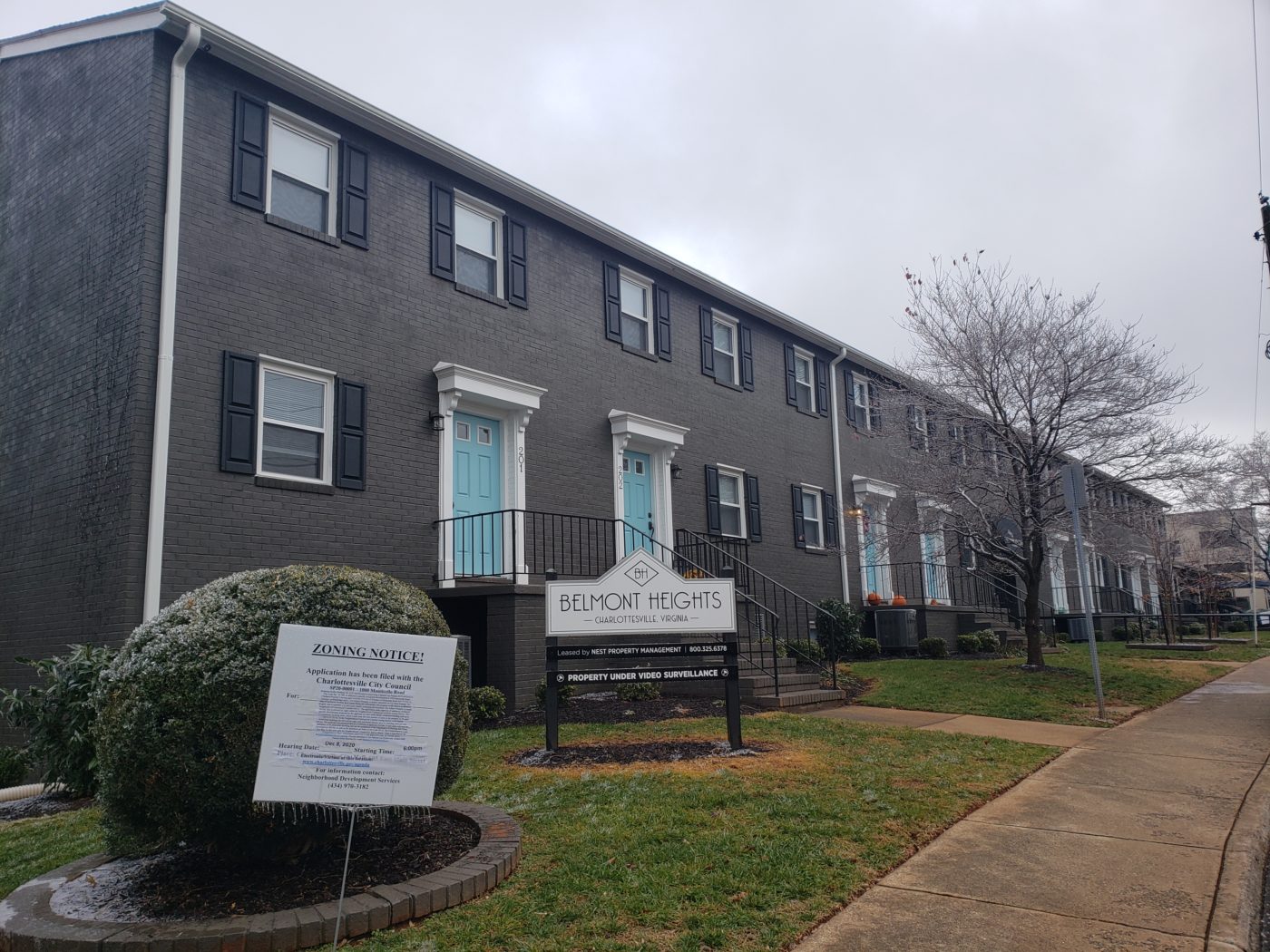 A developer is seeking approval to build 11 new units at 1000 Monticello Road in Charlottesville’s Belmont neighborhood. While the Planning Commission has yet to recommend the proposal, the project is still evolving.

With the goal to set nine of the potential 11 new units as affordable, developer Drew Holzwarth is currently hoping to be granted a special use permit that will allow for increased density on the land parcel. He renovated the adjacent Belmont Heights apartments over the past year — a process that drew contention from community members as some residents were displaced during the renovation.

The 23-unit property had previously been family-owned before being purchased by Core Real Estate in 2018. In February 2019, Drew Holzwarth, of Piedmont Realty Holdings III LLC, became the new owner of Belmont Heights.

By March 2019, his company had notified 14 residents — many of whom were on fixed incomes —  that they needed to move out within two months so the property could be renovated. When May arrived, several residents and the Charlottesville Low-Income Housing Coalition staged a demonstration urging Holzwarth to commit to retaining affordability to all units of Belmont Heights or to sell the property to a nonprofit organization.

Now, according to Holzwarth, five of the 11 residents whose leases were not renewed have coordinated with him to move into newly renovated apartments where he has arranged to keep their rents below market rate. Holzwarth also said eight of the 11 residents were asked to return but three of those did not.

Some residents were able to remain in their apartments or relocate within the complex during the renovation process.

“The thing that makes me nervous is I don’t want a pat on the back. I just don’t want another kick in the shin,” Holzwarth said.  “I was tried and convicted before anyone really asked any questions last time.”

He reiterates that while the letter sent to residents notified them that their leases were to be terminated for the time being in 2019, that he did not technically evict residents — a process that would have involved courts. 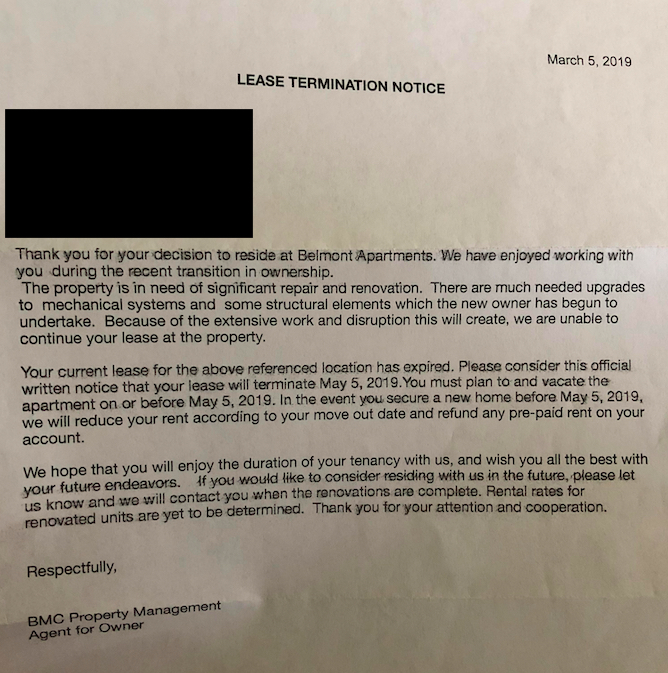 “No one was evicted. Eviction is being told to move out and breaking someone’s lease.

What we shared with them was that ‘we were no longer going to write new leases, so that when your lease is up, we’re going to ask you to move out because we’re going to renovate your home.’”

Holzwarth said that a handful of people ended up moving out in July and August of that year and that he “planned his construction around when they could move.”

He added that he hired Professional Movers Inc. to help cut costs for residents as they relocated for the renovation. Owner Eddie Giles confirmed to Charlottesville Tomorrow that his company moved four residents and packed their belongings as needed.

Charlottesville Tomorrow attempted to contact several former residents and returned residents of Belmont Heights but had not received a response by the time of this publication.

Daryl Rojas, a taxi driver originally from the Bronx borough of New York City, is a resident who was able to stay in place and currently maintains a rent of $800 per month. Rojas came to an agreement with Holzwarth to keep his apartment and rent price while foregoing renovations as long as he is living there with his daughter.

“It was sort of give and take,” Rojas said. “I was not disrupted in my living.”

Rojas first moved to the Charlottesville area in 1996 seeking a lower cost of living and calls it “ironic” that rents have climbed so much in the area over the years. Still, he appreciates being able to remain in the Belmont neighborhood as it reminds him of the portion of the Bronx where he grew up — calling it a “tight-knit community where you get to know your neighbors.”

Going forward, Rojas wonders if his lease will be renewed again.

“There was some generosity in that situation,” he said of his agreement with Holzwarth. “I don’t know what the next step is going to be with the lease expiring in May. … If they’re going to offer me an extension of my current lease or renovate it and rent it to a higher rent. I do know in the past I’ve been treated well.” 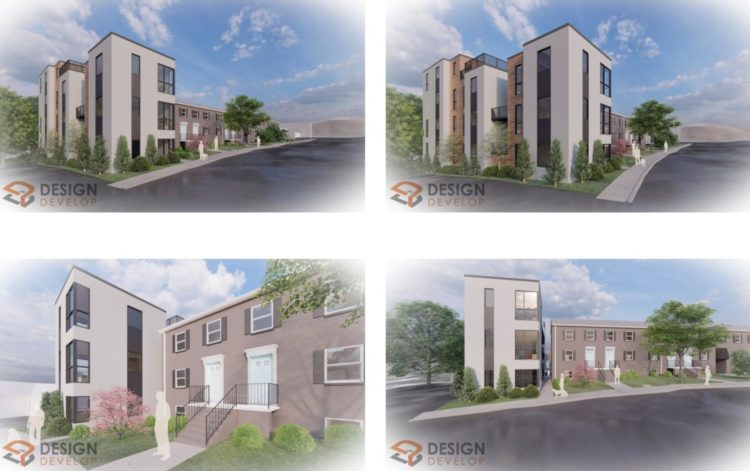 The 11 new units for which Holzwarth is seeking a special use permit, the nine affordable units are proposed to be offered for people making up to 80% of the area median income [AMI]. The proposed new construction would take place on part of the existing parcel where the now-renovated apartments reside.

The renovated apartments retain some of their original character, along with updated interiors, but the proposed new building will have a different architectural character.

“Cramming housing on driveways and parking lots is what we need to do to allow people to live in places that are rich in amenities and walkable and great,” said Planning Commissioner Rory Stolzenberg at the Dec. 8 meeting where the permit was deferred despite garnering some agreement for its concept.

By the time the proposal returns to the Planning Commission in early 2021, its architectural design will have been tweaked — several commissioners and City Councilor Michael Payne took issue with the look proposed on Dec. 8. Another concern was affordability, something Holzwarth said he is open to adjusting.

“It comes down to math at that point. I think we start getting into a debate of are we better at more of a slightly higher AMI or a smaller amount at a lower AMI,” Holzwarth said. “Then you start doing the math and what segment of the market is eligible. I’m not a pro on affordable housing, so I don’t know the answer to that question, but I am open.”

The commission and participating city councilors expressed concern that the designated affordable units were at too high of an area median income to have real impact. Area median income is the point where half of the families in an area make less and half make more. Charlottesville’s recent AMI is more $80,000.

Payne said that affordability at 80% AMI could be beneficial to young professionals, but lower AMI affordability could better benefit others.

Commissioners were also concerned about the definitive commitment to below market rate rents and hoped to see clarity on the AMI and length of affordability before recommending approval for the additional building.

As much conversation surrounding affordable housing has included the use of vouchers, subsidies, and partnerships with nonprofit organizations, Holzwarth said he is trying to show that developers can take strides on their own too.

“In order to fix the affordable housing problem in Charlottesville and the county, a lot of heavy lifting is going to have to be borne by the private sector,” Holzwarth explained. “I think if it’s going to be successful that’s how it will get done. The city and county will have to help the private sector by allowing the developers to build affordable units.”

In neighboring Albemarle County, for example, developers can tap into incentives for increased density for by-right development by designating a percentage of new units to be affordable.  Holzwarth’s Belmont Heights expansion is not tapping into incentives to add 11 units to the 23 he owns.

“I can’t imagine many projects will go before the city and county offering nine of 11 units to be affordable and be able to get done,” he said.  “The way that this project is getting done is I bought a project. My land basis in these additional units is zero. Therefore, my expense that I’m going to put against the new project is merely the engineering process and construction.”

He said if local governments can grant bonus density on existing parcels that it can be another method to “chip away at affordable housing issues.”

Meanwhile, Rojas is grateful to have been able to remain in his apartment at a rent he can afford. He said he just hopes that developers understand communities they alter with their projects and hopes more affordable housing can create more diverse neighborhoods.

“I drive a taxi for a living while some of my neighbors have different occupations. I believe in communities where there are a mix of people who can afford with people who might need help. As a businessman, you have a right to make decisions that are best suitable for you but as long as you’re conscious of your impact on the community.”