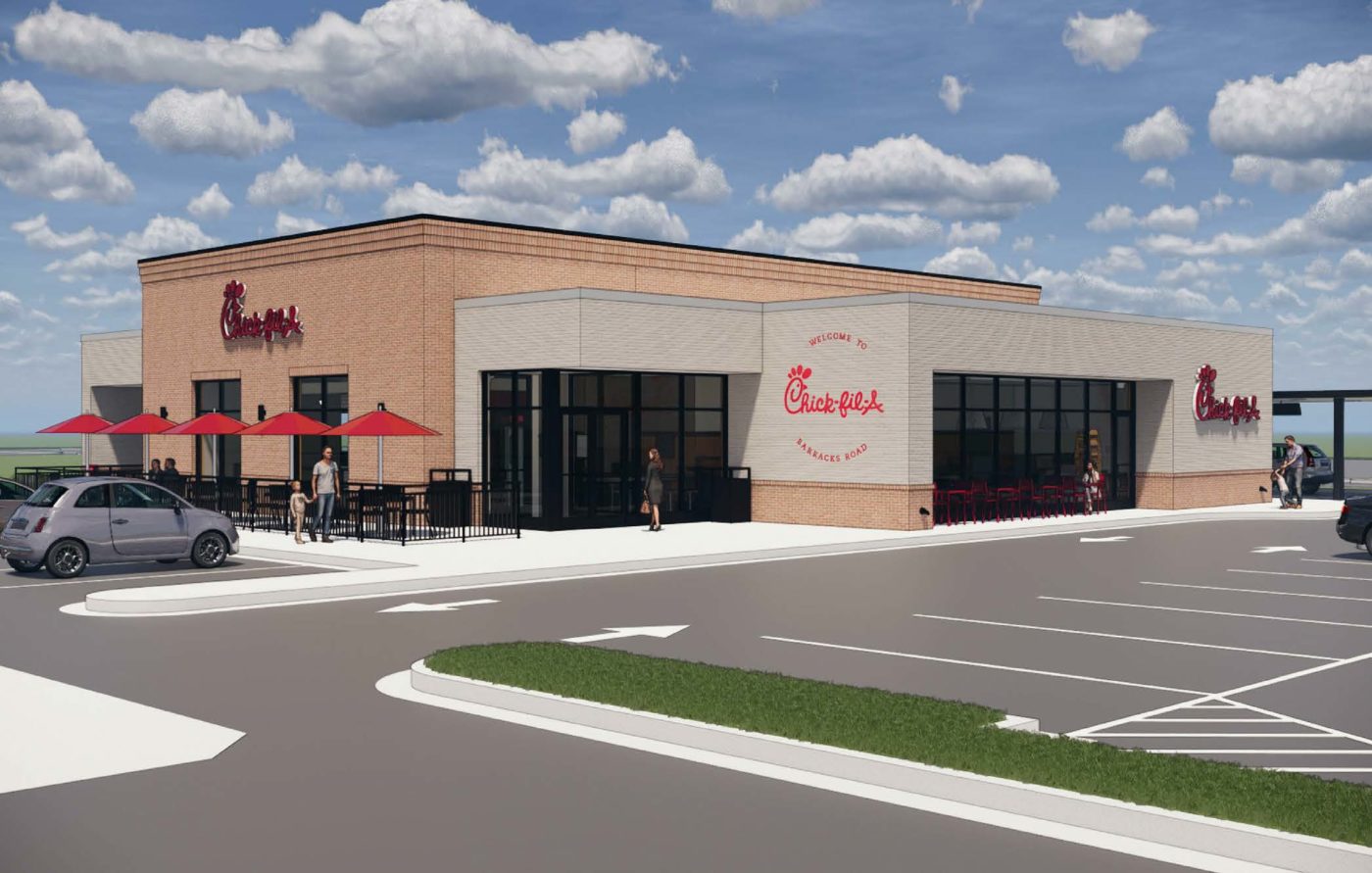 Chick-fil-A, Inc. has submitted an application to the city of Charlottesville to convert a Burger King restaurant in the Barracks Road Shopping Center to a Chick-fil-A.

Sculpture cows have been writing “Eat Mor Chikin” on billboards across the country for decades. The chain behind the advertising campaign may make that chicken-over-beef sentiment a reality in Charlottesville if it gets permission to convert a Burger King restaurant in the Barracks Road Shopping Center to a Chick-fil-A.

Chick-fil-A Inc. has submitted an application to the city through Bohler Engineering to continue operating a drive-thru in the building. The Charlottesville Planning Commission is scheduled to vote on the application on Tuesday.

“We would very much like to have more restaurants in the Charlottesville area, but we have no new locations to confirm at this time,” Chick-fil-A Inc. said in an emailed statement.

The Barracks Road Chick-fil-A would be the first within Charlottesville city limits and the fifth in the area, including one inside a University of Virginia building and another inside Fashion Square mall.

Charlottesville is planning to build a parking garage on East Market Street, one block down from the existing Market Street Garage.

Charlottesville is planning to build a parking garage on East Market Street, one block down from the existing Market Street Parking Garage. On Monday, the City Council approved the land purchase that will allow it to happen.

The garage was key to Albemarle County’s agreement to keep its courts complex in Charlottesville’s downtown area. The agreement spelled out terms for the city to buy the county’s share of a jointly owned property at 701 E. Market St. based on an independent assessment of its value. The city plans to combine that with the city-owned property where the Lucky 7 convenience store and Guadalajara are now to build the garage and has already set aside funds to make this happen.

Several members of the public spoke against the parking garage plan. Activist and filmmaker Tanesha Hudson commented that Guadalajara was one of the cheapest places to eat downtown. Planning commissioner Rory Stolzenberg pointed out that the courts agreement only required the city to provide 90 parking spaces to the county on the property.

Mayor Nikuyah Walker and Councilor Heather Hill addressed commenters’ concerns through questions to city staff members. Walker asked whether Guadalajara could be reincorporated into the shops planned on the first floor of the garage. City economic development director Chris Engel said that could be done.

According to city staff, nearly all of the parking spaces planned for the garage are necessary for the county agreements, the shops planned and waitlists for the city’s existing garages. Building affordable housing as part of the garage would be expensive and add risk to a project on a tight timeline, Engel said. 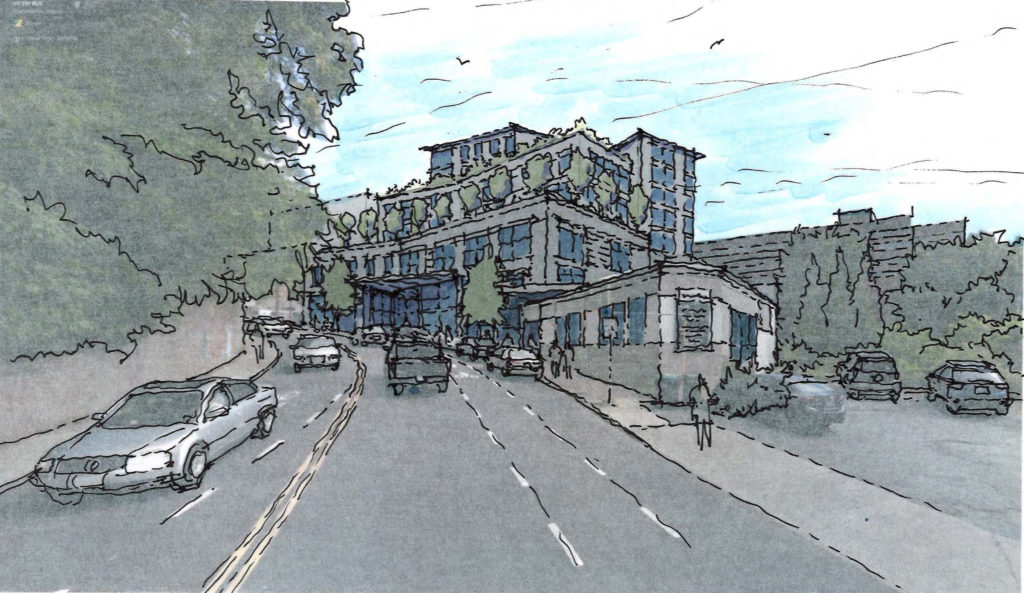 One development proposal for how a nine-story building on the Artful Lodger site could look.

Heirloom Development does not have Charlottesville City Council approval to build a nine-story building at the site of the Artful Lodger furniture store downtown.

When the City Council started to deny the special-use permit application, developer representative L.J. Lopez of Milestone Partners asked the council to defer its vote. Heirloom Development will need to change the proposal before it returns to the Planning Commission and City Council.

Councilors Kathy Galvin and Mike Signer said that luxury housing on the Downtown Mall was not enough of a community benefit to justify the height and bulk of Heirloom’s proposed building. Galvin and Signer voted with Councilor Heather Hill to approve Heirloom’s request for deferral, with Mayor Nikuyah Walker and Councilor Wes Bellamy opposed. 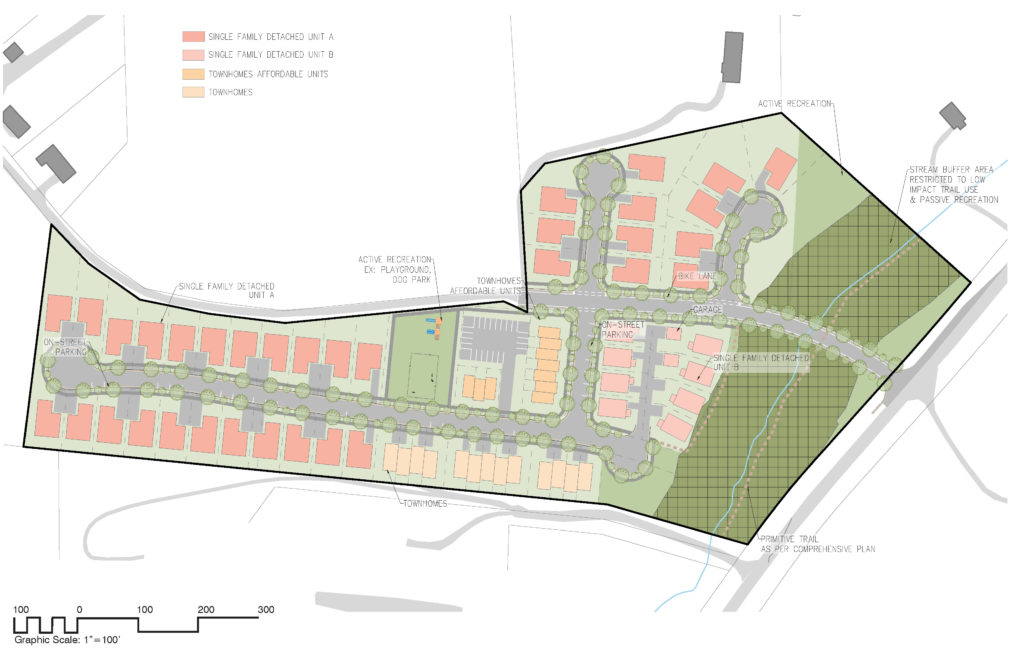 Developer Nicole Scro has approval from Albemarle County to build 65 homes at the intersection of Galaxie Farm Lane and Scottsville Road.

A proposal to build tiny homes in southern Albemarle has removed that housing type to win approval from the county.

Since developer Nicole Scro presented the idea of clusters of cottages off Scottsville Road in 2018, county staff and officials have asked Scro to halve the number of houses in the future neighborhood from 130 to 65. This lower number, which the Board of Supervisors approved on Wednesday, matches the county and community vision for the property as documented in its Comprehensive Plan.

On Wednesday, Scro said that to recover the cost of the land and make the project financially successful, the smaller number of houses allowed means the houses need to be larger and more expensive. Scro told the supervisors that she hopes to propose something more creative elsewhere in the future. 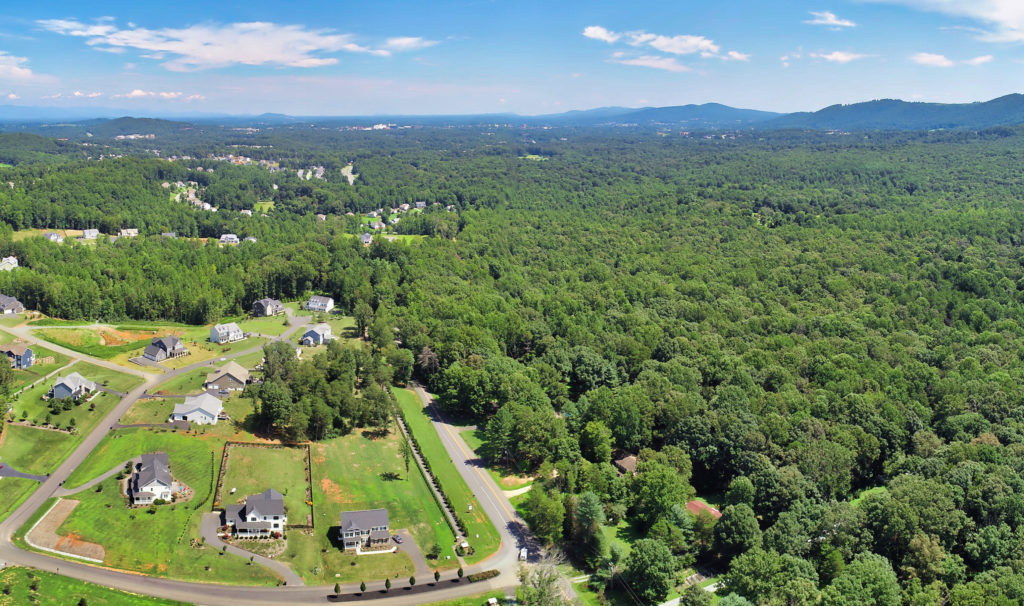 At 1,200 acres and 3,100 residential units, Biscuit Run (right) would have been Albemarle County's largest subdivision.

Biscuit Run’s life as a subdivision is officially over.

The Albemarle County Board of Supervisors voted unanimously on Wednesday to rezone Biscuit Run Park in southern Albemarle to a rural zoning category. The property was once approved to become Albemarle’s largest subdivision, with up to 3,100 residences, until the finances for the project fell through.

Neil Williamson, of the Free Enterprise Forum, commented before the decision that the park is partially in the county’s “development area” and asked the supervisors when they plan to talk about replacing that land. The county funnels commercial and population growth into its development area through zoning laws and other policies.