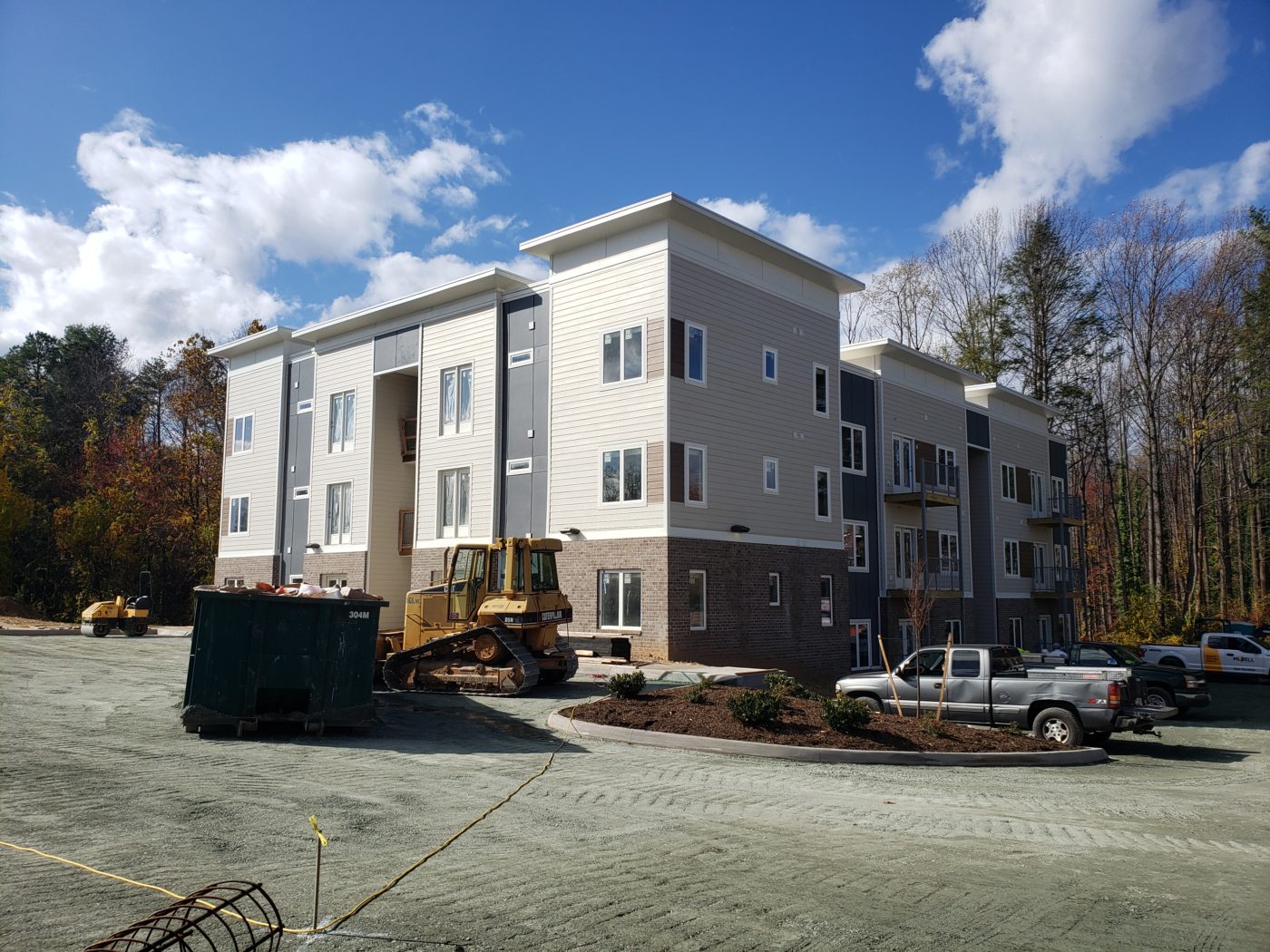 The Collective on Commonwealth

A collection of apartments is almost move-in ready on Commonwealth Drive in Albemarle County’s urban ring.

The Collective on Commonwealth, spearheaded by 7 Development, features 22 two-bedroom apartments with on-site parking.

According to Bo Carrington, principal at 7 Development,  about half of the units have been leased so far and first move-in dates are anticipated as early as Dec. 1.

While each apartment includes two bedrooms, Carrington said his team made the choice for the bedrooms to not share a wall in any of the various layouts. Features of the apartments include stainless steel appliances, granite countertops, walk-in closets and en-suite bathrooms.

“60% AMI is where it starts to be more meaningful,” Carrington said.

7 Development utilized a density bonus with Albemarle County in order to offer a portion of affordable units while keeping the overall development classified as by-right.

“I think this project serves as a great example of the county’s policy incentivizing the delivery of affordable units — it is a win/win and we’re happy to make this small contribution towards solving the local housing crisis,” he told Charlottesville Tomorrow over the summer.

The land was originally purchased in 2017, and Carrington said his team liked the convenience of the parcel being near the Shops at Stonefield. While the apartments will have access to free parking in its lot, there is also a Charlottesville Area Transit stop nearby.

With the initial launch of the site, there is a focus on rental properties, but TJPDC director Chip Boyles asserts that the for-sale portion will be built out in time.

He said as the coronavirus pandemic has consumed much of 2020 so far, the organization wanted to “meet the growing needs of families negatively affected by COVID.”

The city of Charlottesville — along with Albemarle, Fluvanna, Greene, Louisa and Nelson counties — contributed financially for TJPDC to hire a consulting firm to develop the online housing search and information portal. The Charlottesville Area Community Foundation also contributed funding.

Landlords and other property providers can create an account to add their listings to the site. Specification options include income requirements or area median income ranges landlords will accept in available properties, as well as details on any features, amenities or utilities included. There is also the option to disclose various accessibility features such as ramps, door width and handle types, or heights of countertops.

Additionally, the portal links to the Legal Aid Justice Center, Virginia Fair Housing Office and TJPDC’s Mortgage Relief Program, along with various other resources by jurisdiction. Interested individuals can also call a toll-free number at 1-877-428-8844 for an English and Spanish call center to answer any questions. The center will also call in to a third-party translation service on an as-needed basis for other languages.

“We’re hoping it is fluid as needs change,” said Christine Jacobs, chief operating officer and director of housing at TJPDC. 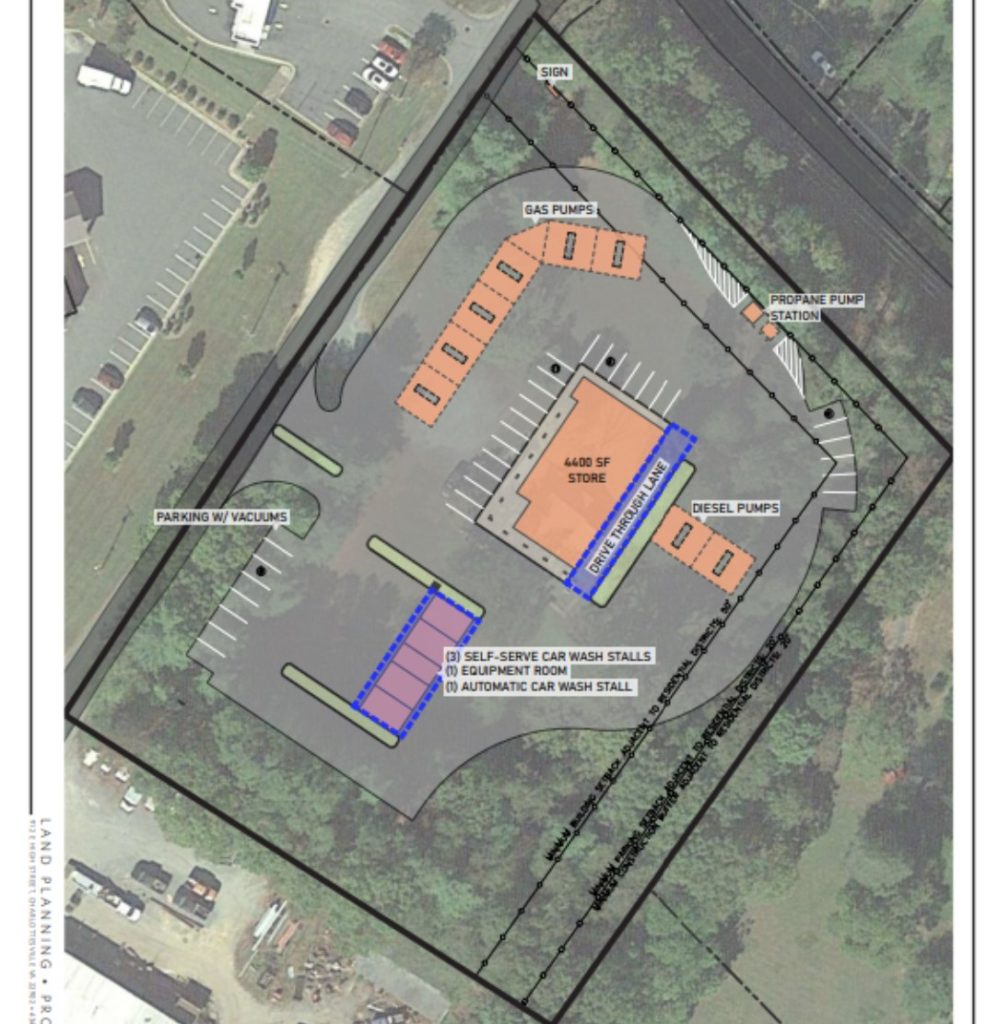 Charlottesville-based Tiger Fuel is seeking a special use permit for a 2.9 acre lot at 153 James River Road in Scottsville. The proposed development would include a convenience store, gas station and car wash. The convenience store would also include a drive-thru.

Tiger Fuel President Gordon Sutton has once again collaborated with Shimp Engineering as he and the company have on various other projects.

At the town’s Nov. 2 Planning Commission meeting, concerns for the project included the 24-hour nature of the self-serve car wash and how much noise the structure could generate. The Planning Commission ultimately recommended the special use permit under the condition that in five years Scottsville “reevaluate the security of the car wash and drive thru and whether the hours of operation need to be amended for security reasons or noise reasons in the community.”

While this Tiger Fuel location advanced in the local government processes, a proposed location in Keswick was killed in a 3-3 vote by the Albemarle County Board of Supervisors this summer.

Dubbed The Market at Boyd Tavern, that Tiger Fuel development would have sat on a parcel near Black Cat and Mechunk roads. The development would have included five gas pumps and a convenience store including the made-to-order sandwiches and to-go foods seen at other Tiger Fuel locations. Though a petroleum company, Tiger Fuel also planned to include electric vehicle charging stations at the site and solar panels for energy use.

According to Sutton, his team is seeking legal action against the county on the matter.

With Tiger Fuel’s plans first presented in early 2017, the Keswick-area  parcel was originally a commercially zoned speck alongside Interstate 64 in a majority residential area. After a 2019 zoning text amendment, the parcel is now both commercial and residential, requiring a special use permit to proceed due to the nature of the proposal being a convenience store.

Meanwhile, Sutton said the Scottsville project is expected to be on the Town Council’s agenda for Monday.