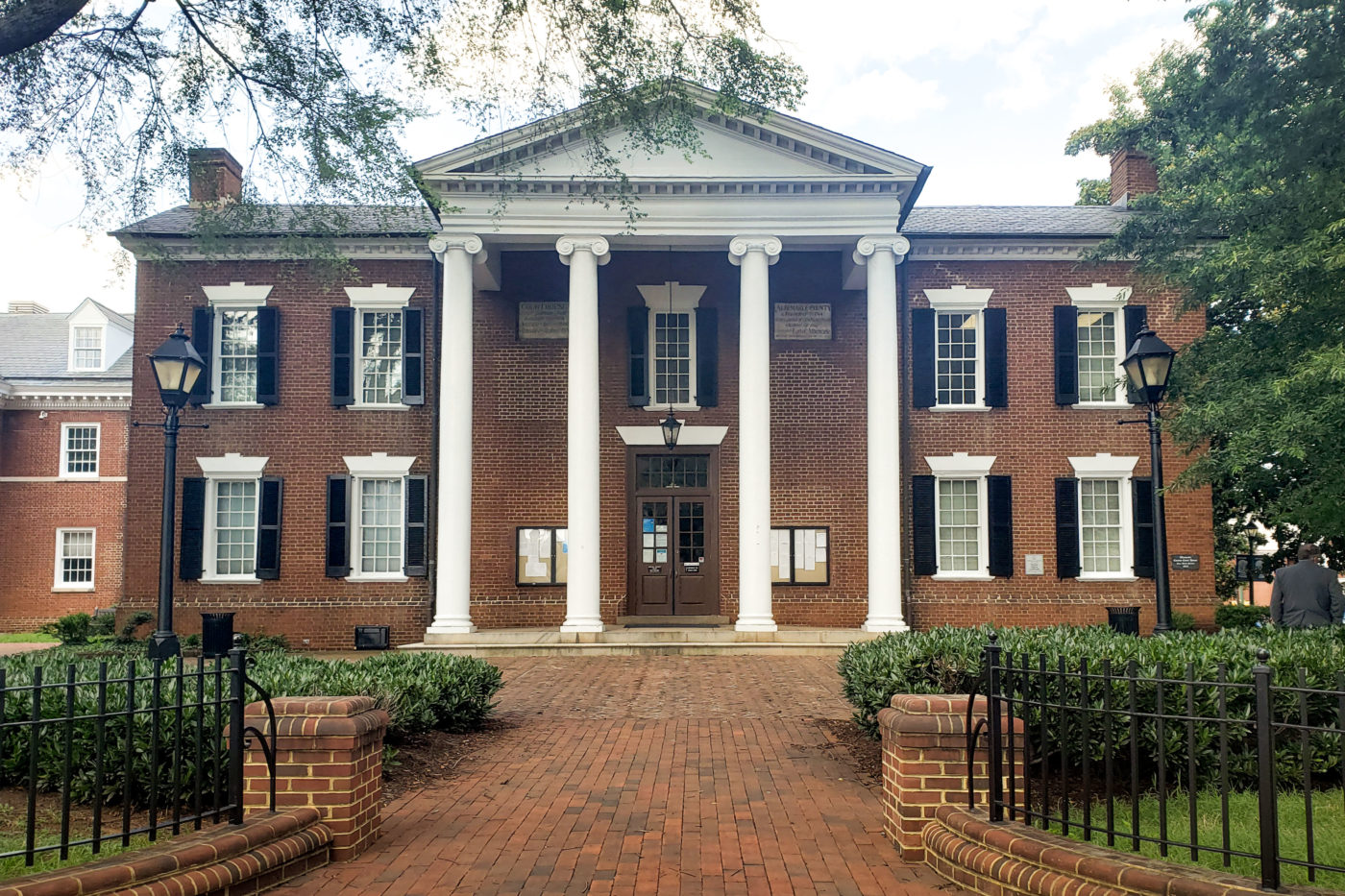 Amidst conversations on Confederate monuments within Charlottesville and Albemarle County’s historic Court Square, an architecture firm has been selected to reshape and renovate several of its surrounding buildings.

Albemarle County has hired Fentress Architects to design and facilitate the construction of renovations and a complex addition to the county and city of Charlottesville court buildings in Court Square.

Fentress was one of eight firms to submit proposals, all of whom were qualified for the specialized work of designing courts and doing historical renovations.

“We are courthouse specialists across the nation, so we have a pretty robust portfolio for courthouse work,” said Steve White, a principal at Fentress Architects and studio director of its Washington, D.C., office. “We also have a particular interest in complex projects that are in urban environments with historic components. This has everything all wrapped up in one.”

“I see this as the beginning of a long relationship,” White said.

The city of Charlottesville participated in the selection process with Albemarle County.

“I think that this is a particularly sensitive historic site. I think there’s a wonderful opportunity we have here to point the way to the future in terms of optimism about our justice system,” White said. “My hope is that our team is able to create an architecture that aspires to the ideals of our judicial process. The gravitas and dignity of the courts but also the transparency and the fairness of the judicial process that folks are entitled to. I think this is a pivotal time in our country’s history and the fact that we are starting now is an exceptional opportunity.”

Meanwhile, Brian Wheeler, spokesperson for Charlottesville, said that there are no current plans for the re-purposing of the current general district court facility just yet.

A proposed site plan as of 2018 shows commercial space in the planned medical office building.

Credit: Image via Board of Architecture Review

While the first few months of the COVID-19 pandemic rendered some Charlottesville streets quieter than usual, construction has been underway at the corner of East High Street and 10th Street Northeast. Behind the traffic cones and fence lies the prep work for a future Sentara Martha Jefferson medical office building and commercial real estate.

“The work that’s being done now is just the start of a process to prepare the property for a future building,” said a spokesperson for Sentara Martha Jefferson. “As the site work is in progress, we will be evaluating the economic environment, project timelines and our next steps.”

The properties undergoing site work lie across High Street from the original Martha Jefferson hospital — which has since been converted into a mixed use development that houses the CFA institute, office space for Apex Clean Energy and an apartment building managed by Real Property. 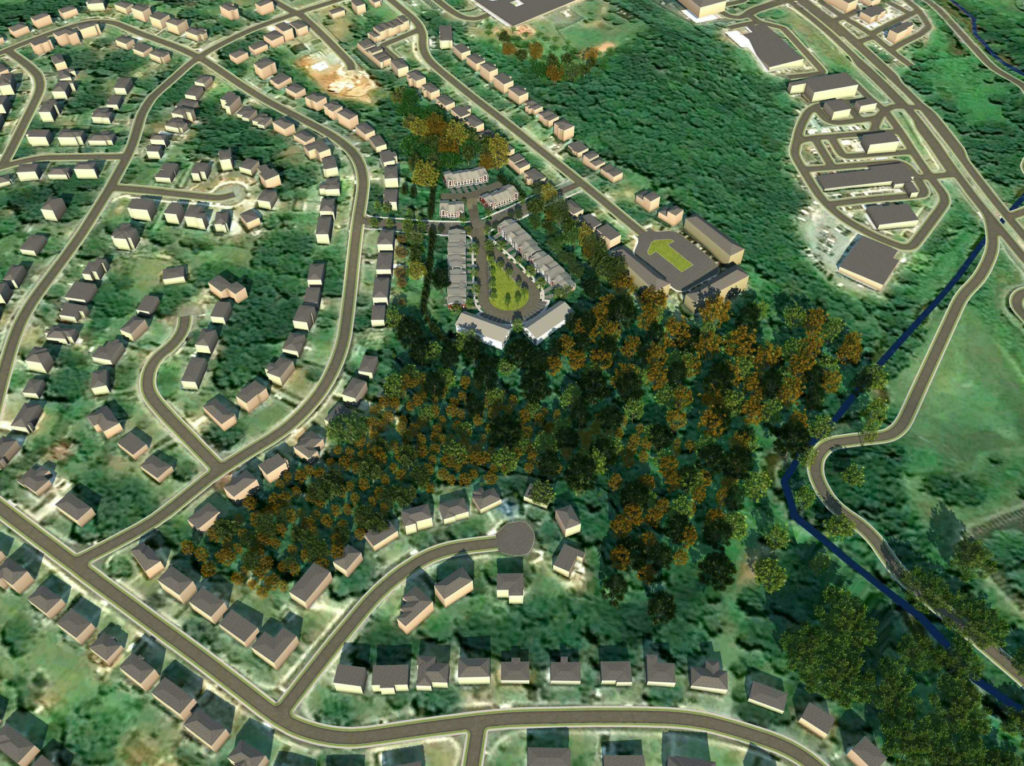 Last summer, the Charlottesville City Council voted to reject a rezoning of land in the Fry’s Spring area to develop eight rows of townhomes. After a year and alterations to site plans which involved more affordable units, the council moved it one step closer to fruition.

At Monday’s City Council meeting, the councilors granted a rezoning, a critical slope waiver and a right of way realignment related to the project in its consent agenda.

“We heard concerns last year from council and have spent the last year working on those concerns,” said Charlie Armstrong, vice president of development at Southern Development and of Belmont Station LLC at tge council’s July 20 meeting.

Changes include increased affordable housing options to serve residents between 25% and 60% area median income, and more housing types than townhomes. Southern Development is formally proffering 15% of affordable housing, but Habitat for Humanity has a contract to build 30% of units.

“It’s the kind of neighborhood that our families have told us they want to live in,” said Habitat President Dan Rosensweig of the Fry’s Spring neighborhood, where the development will be located.

When asked about the price range by Mayor Nikuyah Walker, Armstrong gave estimated ideas that could change by the time of the construction.

“Average price for homes is driven by market rate. We would like to have homes starting in the [$300,000s]. I don’t think we want to be any higher than that,” Armstrong said.

Rosensweig said, there are about 50 Habitat families in the queue to become homeowners. The organization is about to accept about 30 more and, starting next year, Southwood residents would be eligible. On becoming homeowners, residents could pay less for a mortgage than they do in some cases to rent.

With 40 years’ worth of layered deed restrictions, Rosensweig said it will preserve the city’s interest in long-term affordability. Southern Development will construct the shells of the Habitat units, while Habitat will assume control over completion and purchase the related land at a discount.

Walker expressed concern that Southern Development would benefit better from the partnership than Habitat would.

“This is better than anything I’ve seen while I’ve been on council in terms of in theory of what is being offered … there’s still a lot of resources that habitat will have to come up with. The issue is the way that business is done and who benefits from it the most,” Walker said.  “In a few years, we will be hearing about how Habitat is going to finance this, what he asks are there, and what the taxpayer’s dollars will be, while the commitment from Belmont Station will be satisfied based on their own needs.”

Councilor Michael Payne noted issues with the proposal but indicated that he would ultimately vote to pass it, stating that there weren’t strong enough reasons to not support Habitat families’ access to the possible future homes. Ultimately, councilors placed it on the Aug. 3 consent agenda, where it passed. With permissions granted, future construction of the project can happen.