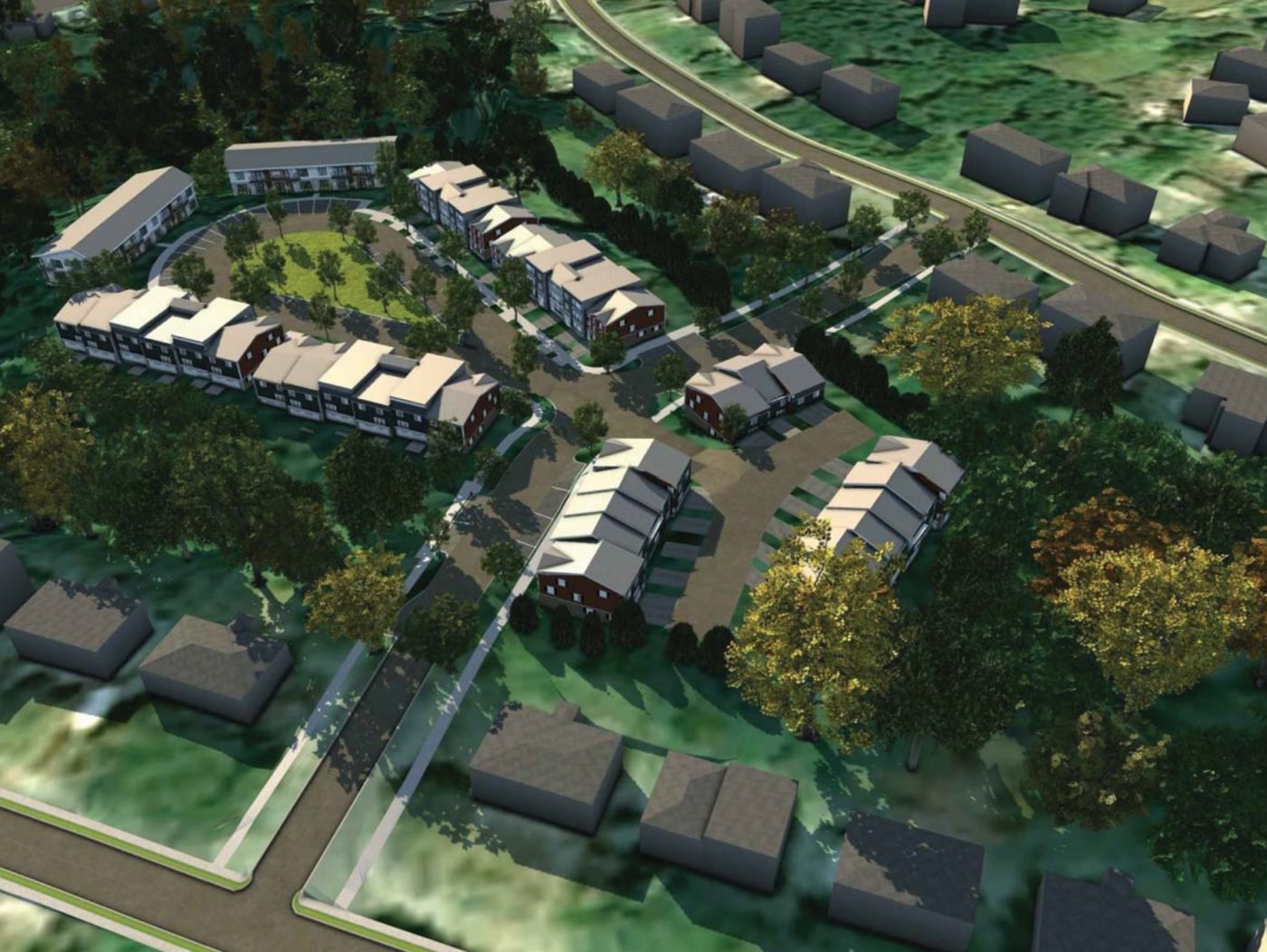 A rendering of the Flint Hill development proposal near Fry's Spring in Charlottesville from 2020. The neighborhood is being planned with trees lining the roads, and with 10 acres of wooded area.

Last summer, the Charlottesville City Council voted to reject a rezoning of land in the Fry’s Spring area to develop eight rows of townhomes. After a year and alterations to site plans which involved more affordable units, the council moved it one step closer to approval.

On Monday, the council forwarded rezoning, a critical slope waiver and a right of way realignment related to the project to the consent agenda of its Aug. 3 meeting.

“We heard concerns last year from council and have spent the last year working on those concerns,” said Charlie Armstrong, vice president of development at Southern Development and of Belmont Station LLC.

Changes include increased affordable housing options to serve residents between 25% and 60% area median income, and more housing types than townhomes. Southern Development is formally proffering 15% of affordable housing, but Habitat for Humanity has a contract to build 30% of units.

“It’s the kind of neighborhood that our families have told us they want to live in,” said Habitat President Dan Rosensweig of the proposed Fry’s Spring neighborhood.

When asked about the price range by Mayor Nikuyah Walker, Armstrong gave estimated ideas that could change by the time of the construction.

“Average price for homes is driven by market rate. We would like to have homes starting in the [$300,000s]. I don’t think we want to be any higher than that,” Armstrong said.

Rosensweig said, there are about 50 Habitat families in the queue to become homeowners. The organization is about to accept about 30 more and, starting next year, Southwood residents would be eligible. On becoming homeowners, residents could pay less for a mortgage than they do in some cases to rent.

With 40 years’ worth of layered deed restrictions, Rosensweig said it will preserve the city’s interest in long-term affordability. Southern Development will construct the shells of the Habitat units, while Habitat will assume control over completion and purchase the related land at a discount.

Walker expressed concern that Southern Development would benefit better from the partnership than Habitat would.

“This is better than anything I’ve seen while I’ve been on council in terms of in theory of what is being offered … there’s still a lot of resources that habitat will have to come up with. The issue is the way that business is done and who benefits from it the most,” Walker said.  “In a few years, we will be hearing about how Habitat is going to finance this, what he asks are there, and what the taxpayer’s dollars will be, while the commitment from Belmont Station will be satisfied based on their own needs.”

Councilor Michael Payne noted issues with the proposal but indicated that he would ultimately vote to pass it, stating that there weren’t strong enough reasons to not support Habitat families’ access to the possible future homes.

Unless pulled from the consent agenda in the next council meeting, the project likely will pass as it stands.

A mixed-use development near the Charlottesville-Albemarle Airport is progressing in Phase I of the overall project. This portion of North Pointe will entail commercial space and about 100 single family homes. According to David Mitchell, construction and development manager of Great Eastern Management Co., the home sites should be available by the end of 2020 or the beginning of 2021.

Mitchell said at that point, platted lots will be available to builders. Additionally, the first phase will have room for the development of three apartment buildings.

“The total number of units could be around 400 to 450 along those three locations,” Mitchell said.

He anticipates construction time of those lots to take between nine months to a year. Mitchell says that GEMC is talking with apartment developers but does not have concrete details to announce yet.

Mitchell also says that the land designated for commercial development can accommodate various uses that include retail, offices, hotels or gas stations.

“The exact square footage depends on the end user and number of stories the buildings are,” Mitchell said.

The middle entrance of the overall project along U.S.  29 will feature the commercial real estate plots. A second phase of the project includes more residential development and the possibility of a future additional road connection.

“As we build south from the middle entrance, there’s a proposed connection to Airport Road/Proffit Road,” Mitchell explained.  “We’re not building that way right now.”

North Pointe has been years in the making, obtaining rezoning approvals, amending sewage capacity concerns and a brief hiatus during the 2008 housing market crash. The project is among others in the vicinity under way in the area, to include the Brookhill subdivision and a forthcoming Wawa.