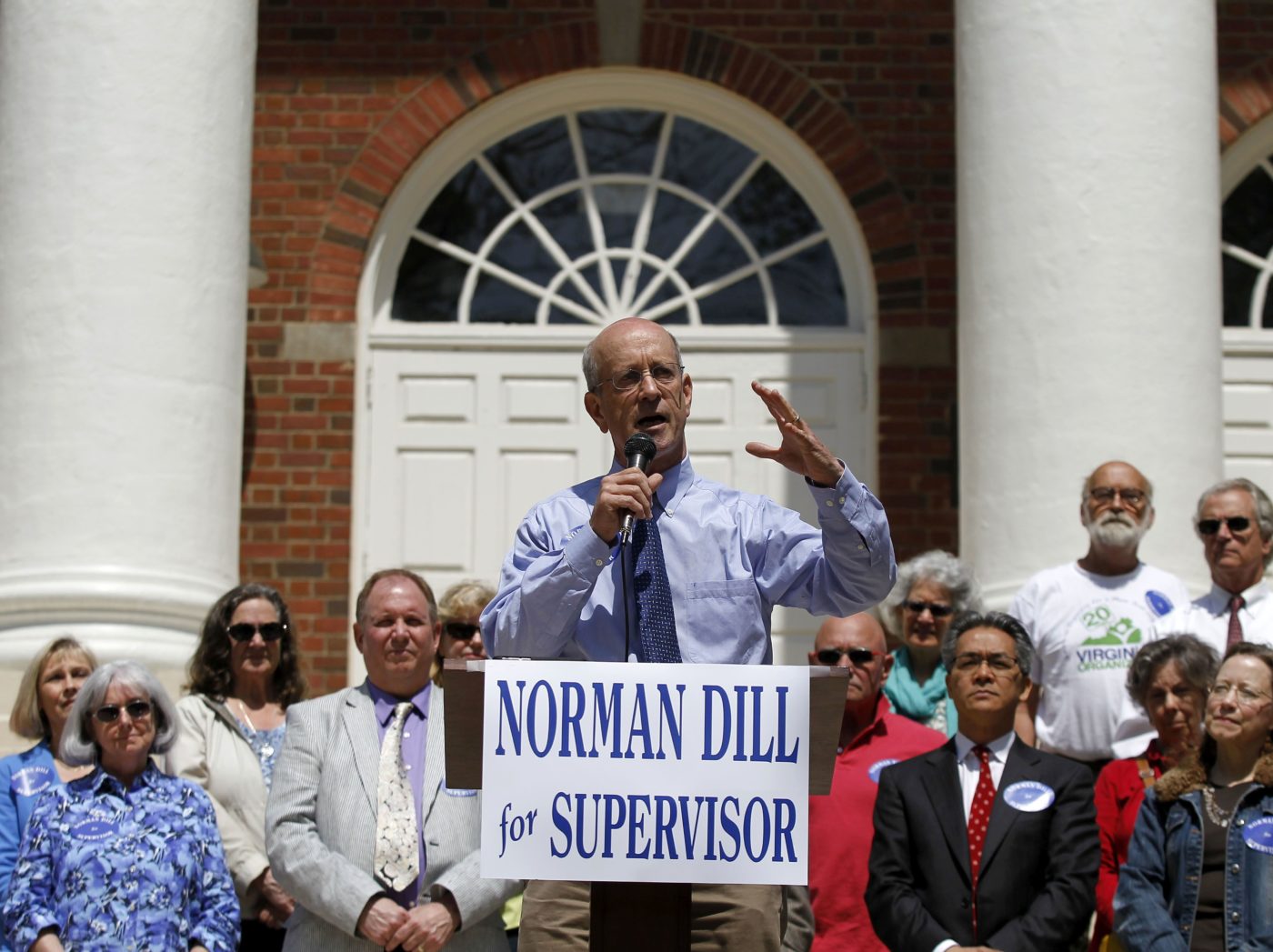 The owner of Rebecca’s Natural Food is the latest candidate to announce a bid for the Albemarle Board of Supervisors.

“We have such a wonderful combination of a rural countryside with a small-town friendliness with an urban dynamism,” said Norman Dill, who is seeking the Democratic nomination for the Rivanna District seat.

Dill, 61, was surrounded at a campaign announcement Tuesday by several dozen supporters, including four current supervisors.

Albemarle Democrats will hold a mass meeting to nominate candidates for office May 18.

If he becomes the party’s nominee, Dill will face Lawrence Gaughan in the Nov. 3 general election.

Gaughan, who unsuccessfully ran against 5th District Rep. Robert Hurt, R-Chatham, in 2014, had filed paperwork to run for the seat as a Democrat but changed his status to independent last week.

“Last year when I was running for Congress, I went through the party nomination process,” Gaughan said. “I feel with this election, I don’t want to go that same route. Let the voters decide instead of a handful of people who participate in a caucus.”

Supervisor Kenneth C. Boyd, a Republican, announced earlier this year that he will not seek a fourth term in the Rivanna District seat.

“We’re hoping that someone like Norman Dill is going to be able to take his slot,” said Del. David J. Toscano, D-Charlottesville.

So far, no Republican candidates have come forward for any of the three seats up for re-election on the Board of Supervisors this year. The party will hold a mass meeting in June to select its candidates.

“There are interested folks, but no one is ready to come out and declare their candidacy,” said Cindi Burket, chairwoman of the Albemarle County Republican Party.

Would-be Republican candidates have until May 22 to notify Burket that they would like to seek the nomination.

Supervisor Jane Dittmar, another Democrat, said she will announce April 30 whether she will seek re-election to the Scottsville District seat.

Dill is a graduate of the Harvard Business School who founded Rebecca’s Natural Food in 1987. He also was a co-owner of the Harlowe-Powell Auction Gallery and has been involved with several other area businesses.

“Norman is someone I have looked up to for over 20 years,” Nguyen said. “When I started out my business, he was the first person I went to and talked to to take the pulse of whether entrepreneurship would work for [me] in Charlottesville.”

Nguyen said Dill’s business experience qualifies him to represent Albemarle during a period of change.

“Change is coming fast and furious,” Nguyen said. “All you have to do is look around and see so much construction all over, and it’s going to accelerate.”

Dill said he has often thought of entering public service, but he now has the time to commit to the office. He said he would like to see Albemarle expand efforts to promote small farms.

“There are so many products that can be grown here, especially with the water crisis in California,” Dill said. “A lot of products are moving to the East Coast.”

Dill said the county can add jobs in the agricultural sector by investing in processing facilities such as a flash-freeze center that would allow crops to be stored, as well as canning factories and places to process meat.

Dill said all five of his children went through the county’s school system.

He also has the support of the last Democrat to vie for the seat.

“I think he’s a great candidate,” said Cynthia Neff, who lost to Boyd in 2011. “Business owners have a tremendous impact on our community and I think he has a proven track record.”