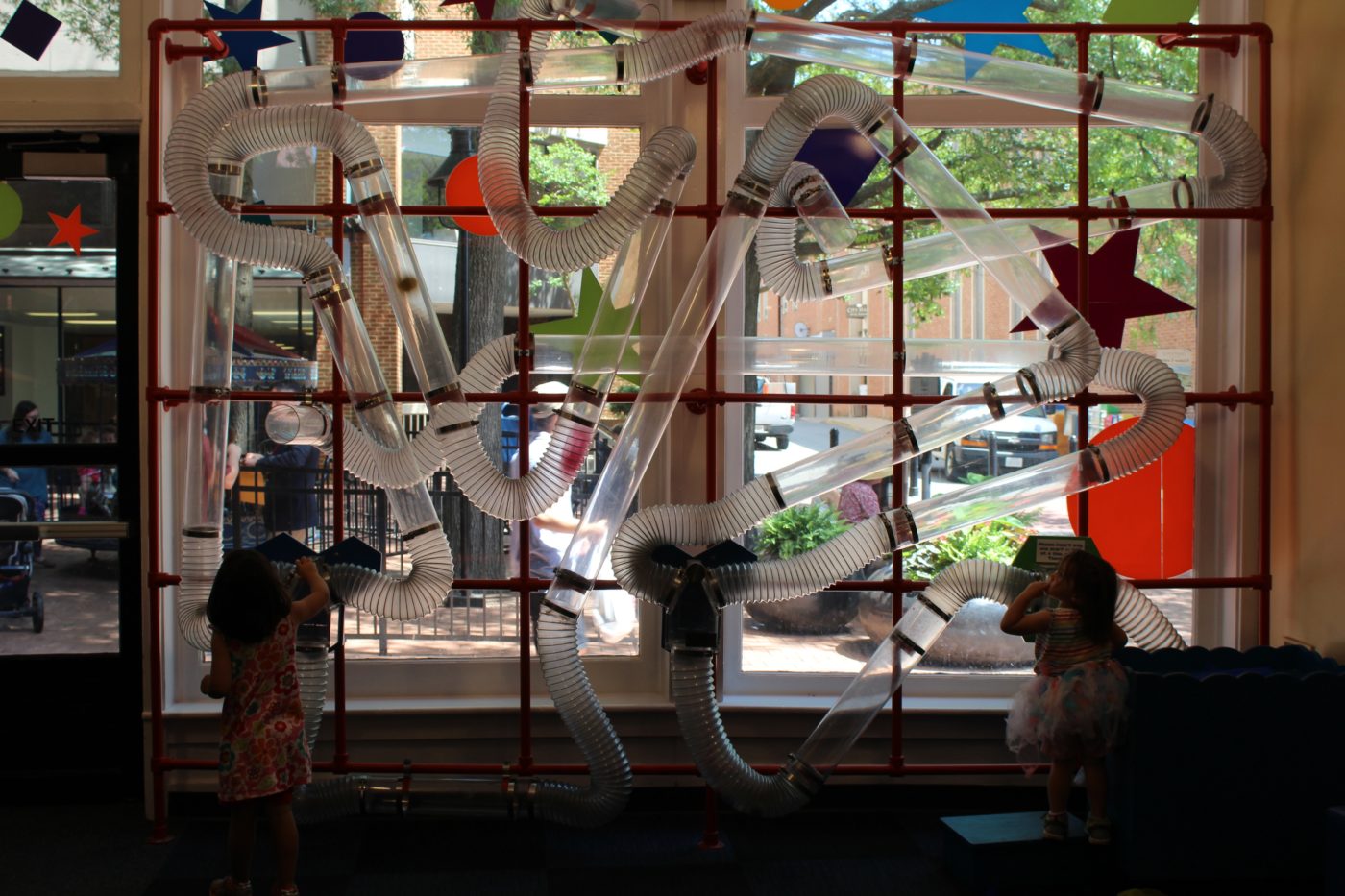 Children watch colorful scarves race through air tubes in one of the first exhibits visitors see when they walk in the Virginia Discovery Museum.

A little boy wearing an oversized firefighter uniform runs past a girl with a stethoscope around her neck. Bell sounds drift from an open music room as shrieks and giggles fill the hallway. Summer has begun at the Virginia Discovery Museum.

A year after a major renovation, the Discovery Museum has seen attendance grow from 50,000 visitors last year to an anticipated 70,000 visitors this year.

Executive Directors Janine Dozier and Beth Solak attribute the growth to an increase in community engagement due in part to the museum’s Sponsored Admission Program and a revitalized mission to serve as an early education opportunity for all children in the community.

“The museum is clearly never going to be a preschool,” Dozier said. “But as a board, we started looking at how can we be an educational resource, not only for families who can afford the price of admission, but for all families in our community.”

Motivated by the Charlottesville-Albemarle Early Education Task Force’s work on assessing the community’s need for increased preschool opportunities, Dozier and Solak honed in their goals for the museum. With the addition of new exhibits last spring, including a Literacy Lounge and a construction area, Dozier and Solak say the museum is running in accordance with its mission.

“All of our exhibits are designed in a way that you’re actively playing and you’re actively thinking,” Dozier said. “This is a place where you can step outside the technology-driven world that we live in and just play with other children.”

Despite the museum’s emphasis on minimum technology, there is an exhibit with an iPad that Solak says has received some pushback.

“We very gently explain to folks that we hope they can understand that not everyone has three iPads at home and Wi-Fi access and internet capability,” Solak said. “And it’s important for us, as an educational resource, to have those opportunities available for kids and that it’s sort of a parent’s choice how you want to direct your child’s creativity while they are here.”

Supplemental programs created over the past year focus on community engagement.

The Thought Leadership Parent Discussion Series is a quarterly event focusing on topics ranging from screen time to work-life balance to meditation. Another recent addition is artist features in the Creation Station. The museum partners with local artists who teach art classes at the museum and put up their work on display.

“It’s gone beyond a place to play,” Dozier said.

The Sponsored Admission Program, accounting for more than 10 percent of visitors to the museum, has been instrumental in expanding the museum’s outreach in the community. The museum allows affiliates of the 42 partner organizations to enter for free.

Dozier and Solak reached out to community organizations who they felt had similar goals and user bases. This led to a significant increase in partner affiliates taking advantage of the opportunity. Due to the increase in free admissions, the museum has been forced to seek out alternative funding to subsidize its income.

“Our attempt is to eliminate all barriers to entry,” Solak said. “Folks are coming through the doors and that’s wonderful, but that’s wear and tear on the exhibits. That’s supplies. That’s more kids in our programs. We’re thrilled with that, but it’s given us a lot of fodder to go back out into the community and say, ‘here’s why we need your support.’”

ReadyKids, an organization focused on preparing children for school and relationships, is one of the most frequent users of the Sponsored Admission Program. Philanthropy Director Allison Henderson says the Discovery Museum reinforces what ReadyKids teaches their children and is a good supplement to the options they provide.

“It’s a safe, free opportunity for the kids and families in our program to attend something that’s centrally located, on the bus line and has good hours for kids, especially during the summer,” Henderson said.

One of the changes that Henderson enjoys the most is the new and improved signage around the museum. Created in collaboration with graduate psychology students at the University of Virginia, it provides prompts for parents about how to engage with their children at each exhibit.

“The signage is excellent. It reinforces the concepts that we’re teaching and it also promotes interaction between children and parents,” Henderson said. “It takes a lesson and, hopefully, there’s something you can learn that you can go back into your own home and continue that lesson.”

With help from more than 250 volunteers, ranging from teen interns during the summer to retirees who monitor the front desk year-round, the Virginia Discovery Museum has expanded its outreach over the past year. Dozier and Solak say they hope to increase the museum’s visitor base, striving for inclusivity throughout the Charlottesville area.

“It’s been great to see families from all backgrounds playing together, because kids don’t know who you are or where you’ve come from,” Dozier said. “They just think, ‘Oh, I like trains, you like trains, let’s be friends.’”