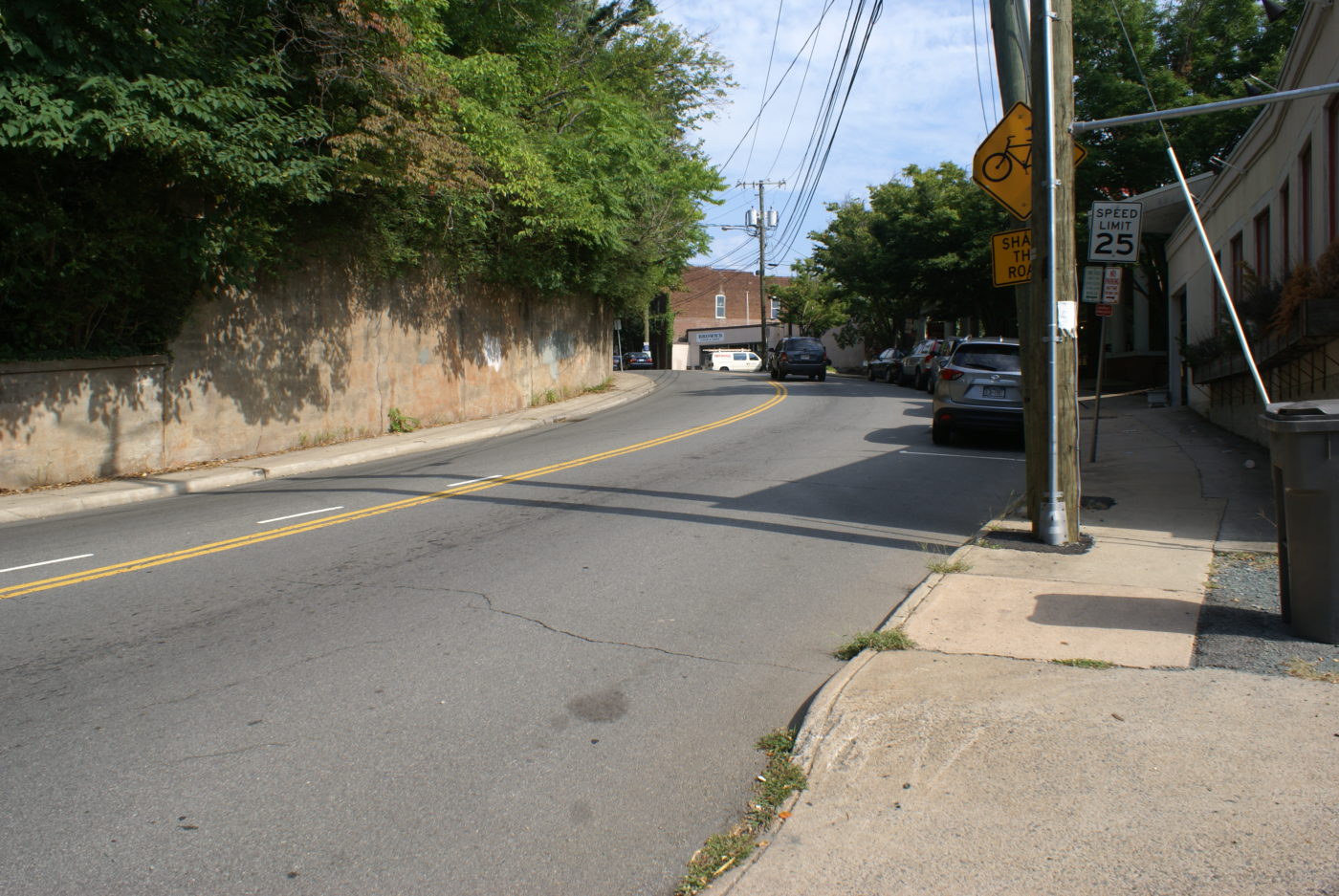 A prominent downtown wall is slated to join the ranks of public art pieces in Charlottesville. The Board of Architectural Review unanimously approved a bike-themed mural that the Charlottesville Mural Project is scheduled to complete by this fall.

“In general, I think this [mural] would add to the vibrancy of downtown,” said board member Melanie Miller at the BAR meeting Tuesday.

The mural’s future home is a 180-foot retaining wall located along the 200 block of West Market Street that borders the McGuffey Hill Condominiums and the McGuffey Art Center. The mural’s design features a silhouetted series of cyclists rolling downhill along the wall.

“One of the reasons we liked the theme is because it has a civic message,” said Mark Quigg, a professor of neurology at the University of Virginia who also is a member of the group proposing the mural.

Quigg, a bike commuter himself, hopes that the mural will inspire passersby to think about the possibility of having more bicyclists on the road and the positive impact they can have.

Board member Carl Schwarz said that the location of the retaining wall across from what is essentially a post-modern strip mall makes it the perfect place for a mural that promotes change in Charlottesville.

“We’re trying to be a bike-friendly city,” Schwarz said. “I think this is a great way of advertising that.”

Mary Joy Scala, the city’s historic preservation planner, added that the mural would be compatible with the public art on display at the McGuffey Art Center.

The mural proposal comes from a group of friends who meets monthly at the Horse & Hound Gastropub.

“The point is just to meet with friends, but we always have a project to give us a reason for meeting,” said Quigg. “The project is usually something artsy.”

Other members of the group include Charles Peale, an artist; Mike Powers, a designer; and Jeff Hill, a web and publications editor at UVa. The group has completed various art-related projects like designing the T-shirt for the Charlottesville Ten Miler and submitting cartoons to “The New Yorker.”

After being inspired by other pieces of public art throughout Charlottesville, the group decided to design their own mural. They approached Ross McDermott, director of the Charlottesville Mural Project, for help bringing the project to fruition.

“Ross has been a great resource, encouraging us to do it and giving us advice,” Quigg said. “He’s been instrumental in turning what is kind of a bar-table discussion into something real.”

It was McDermott who suggested the location on West Market Street.

“I’ve had my eye on that wall for a really long time,” he said.

McDermott also noted that he received positive feedback and unanimous approval of the mural from residents of the McGuffey Hill Condominiums.

“Typically, when it comes to public art, 50 percent of people don’t like it and 50 percent do,” McDermott said. “I think [the unanimous approval] is a testament to the fact that we’re responding to their desires.”

Scala said that when the BAR reviews an application for art, the board should consider the piece’s appropriateness but not its content.

“You just have to consider the impact on the district and if you think it fits in with the character of the district,” Scala told members of the BAR.

Considerations include the mural’s location, the project’s scale, the medium or materials, its compatibility with the character of the surface and the surrounding historic context.

Members of the board discussed whether the mural should be painted directly on the concrete wall. Board member Tim Mohr said he prefers murals that are movable or transformable.

“I’d rather see a constantly changing thing in a place that’s as prominent as that as opposed to something that’s kind of fixed,” Mohr said.

Board member Michael Osteen voiced a different opinion, saying he could not imagine applying plywood cutouts to the wall that would deteriorate.

“I think painting on this concrete wall is totally appropriate,” Osteen said. “I think it’s going to be beautiful when it’s new and I think it will have its own patina down the road.”

He added that having a more permanent mural would carry other benefits.

“I think to have this wall adopted, effectively, by a group that wants to maintain it now and for 20 years in the future is a very attractive idea to the city as a whole,” Osteen said.

Miller expressed concerns about the direction of the bicyclists’ travel.

“It seems like a mass exodus away from downtown,” she said.

Miller suggested changing the direction to make it look more like the figures are rushing to reach their destinations downtown. Osteen pointed out that they would be biking on the wrong side of the road if the design were flipped.

The board decided to leave that decision up to the mural’s designers and unanimously approved a certificate of appropriateness. Board members Brian Hogg and Whit Graves were absent.

The funding for the mural will come out of the Charlottesville Mural Project’s budget, which is supported by The FUNd @ CACF, a donor-advised fund of the  Charlottesville Area Community Foundation.

McDermott said he has felt supported by the city as a whole during his time as director of the Charlottesville Mural Project.

“I got a very personal and warm response from many members of the BAR saying that they love what I’m doing and they want to see more murals in Charlottesville,” McDermott said.