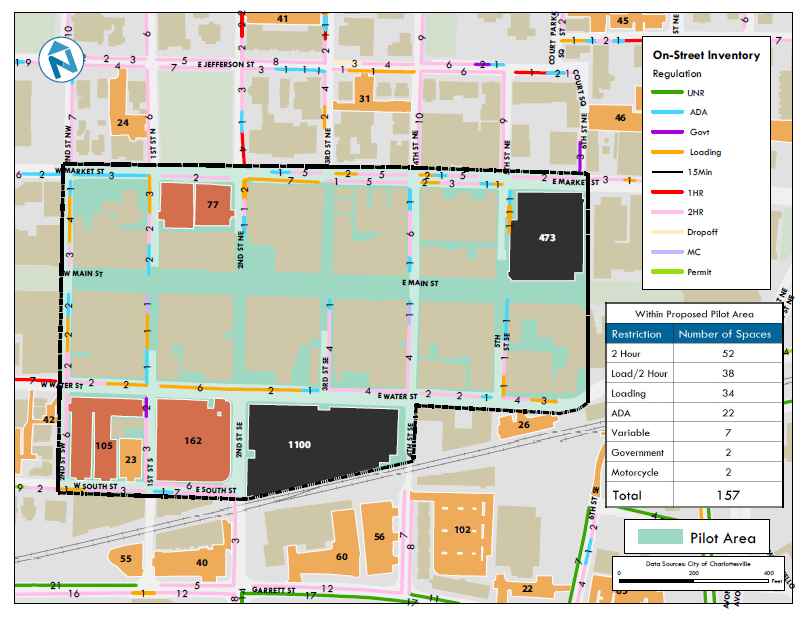 The Charlottesville City Council will be presented Monday with a plan to install metered parking spaces around the Downtown Mall as part of a six-month pilot proposal.

The concept was developed by the firm Nelson/Nygaard and builds on a study the company presented to councilors last fall.

“This is a chance to get council back up to speed, and for the two new councilors, and make sure it’s still a direction that they want to go,” said Chris Engel, the city’s director of economic development.

The western and eastern boundaries will be Second Street West and Sixth Street East, respectively. Market Street will be the northern border and the railroad tracks will serve as the southern limit. In all, 157 parking spaces would be converted to metered spots.

“The research and data shows that having turnover and having availability of parking is a benefit to a retail business,” Engel said. “Our consultants have been clear that this is not a revenue generator for the city. It’s a management tool.”

The firm recommends charging $2 an hour and extending enforcement hours to 8 p.m. during the six-month testing period. Customers would be charged in 15-minute increments.

The consultants also suggest allowing a 30-minute grace period for brief stops. The current two-hour limit also would be kept in place, but an option for the future could be to charge higher rates for every hour thereafter.

The study also recommends assessing the effect the metered spaces would have on adjoining streets. Spaces on High and Garrett streets that currently have no time limit would remain free but could see a two-hour restriction put in place.

If the council agrees to proceed with the pilot, a request for proposals would be developed for potential vendors. The Nelson/Nygaard report suggests the city should ask for a no-cost period to test out the feasibility of the system.

If a majority of the council decides to proceed, city staff also will begin the process of creating a separate fund in the budget to collect all revenues from meters and parking fines.

“That’s simply an accounting mechanism to push all the revenues and expenses into a single unit so you can manage it better,” Engel said. “What most cities do is take that revenue and reinvest it in the area affected by the meters.”

The fund would not be put into place until July 1, 2017, and would be discussed during next year’s budget development process.

The possibility of metering downtown streets has been discussed for several years. A 2008 parking study suggested the approach as a way of better managing the city’s resources. The council opted not to proceed at that time.

The Downtown Business Association of Charlottesville and the Charlottesville Parking Center brought the idea back into the public eye in late 2014. Bob Stroh, former executive director of both organizations, asked the council to consider installing parking kiosks that would read license plates.

Instead of immediately pursuing a detailed proposal offered by the CPC, councilors decided to hire Nelson/Nygaard to update the 2008 study and were presented with a report in October. They directed the firm to write a proposal for a pilot program based on the study’s recommendations.

Nelson/Nygaard suggests the meters should allow payment by credit card or mobile phone.

“Both of these options provide a transformational change in how drivers respond to parking options and their cost,” the consultants wrote in a proposal dated March 3.

Since that date, the Charlottesville Parking Center has sued the city over rates at the Water Street Parking Center. The structure is jointly managed by the CPC and the city.

One allegation in the suit is that the city would be unlawfully competing with the CPC if parking meters were installed. The CPC is asking for $1 million in damages and an injunction to prevent the city from being involved with setting rates at the Water Street garage.

Stroh has since retired and former Charlottesville Mayor Dave Norris will take over as head of the CPC in June.

Engel had no comment on the lawsuit, nor did Mark Brown, owner of the Charlottesville Parking Center since August 2014.