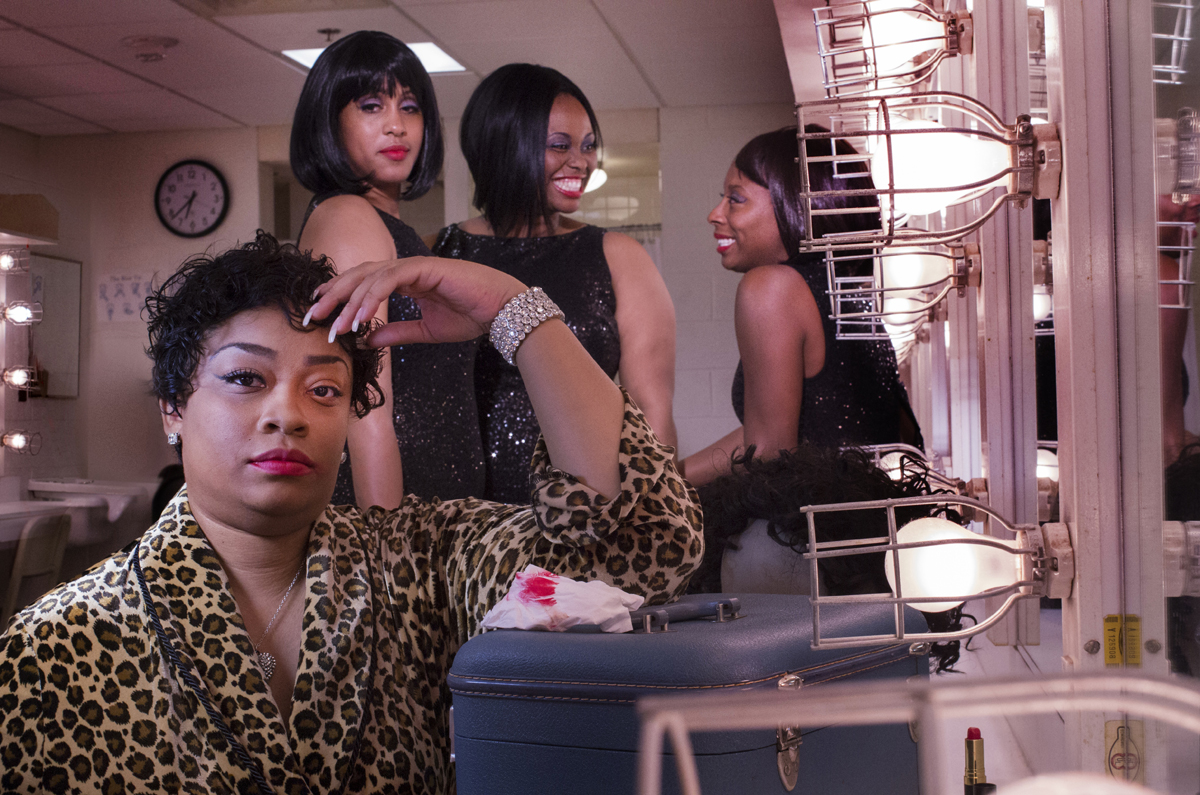 One of Live Arts’ guiding principles is “forging theatre and community. “ With “Dreamgirls,” which opened Friday, it most certainly does that, focusing on community members too seldom seen on stage here.

“Dreamgirls” features a talented, all black, all local, cast, just the third show among Live Arts’ twenty-five years and 285 produced shows to do that.

“Dreamgirls,” which is very loosely based on story of the 1960s hit group The Supremes, took six Tony Awards after its 1981 Broadway opening, and may well be the most complex show Live Arts has tackled in a very long time. With 22 performers, most of them new to the stage, 30 musical numbers, and several subplots, this show required hard work, enthusiasm and dedication.  And it shows.

There are clear limitations to what a community theater can do with a show this big.  But director Julie Hamberg and Assistant Director/ Choreographer Ike Anderson have pulled it together nicely, substituting a smaller, four piece band for what would have been an orchestra, and doubling up on some of the parts.

Despite the smaller band, an overarching problem with the show on Friday was in the acoustics. It was sometimes hard to hear and understand the dialogue, which could make the story hard to follow for those who haven’t seen either the show or the2006 film.

As Effie, Riley shows us a powerful voice and the ability to belt out a song,making her an audience favorite on opening night.  But her songs seem at their best in the purer notes of her more effortless voice, best seen in the second act opener “I’m Changing.”  In that number we hear, at first, a pure, clean, melodic voice, but when she amps up the voltage and the volume she sometimes becomes pitchy.  Complex vocal riffs are clearly popular these days, but sometimes moderation alternating with complex riffs is the best way to show off a voice as lovely as Riley’s.

Darkita Brown, Valencia Harvey and Deandra Irving also give good performances, as do Winston Smith and Israel Brown, among many others. The energy and enthusiasm radiating from this company is contagious, and they all have good reason to be proud.

Clearly, every member of this company loves what they’re doing, body, soul and especially heart, putting intense energy and talent out there for audiences to see—and on Friday, the audience rewarded them with a standing ovation.

Clare Aukofer holds a BFA in Theatre and Education from the University of Wisconsin-Milwaukee. She has worked at professional theaters, including Ford’s Theatre, and served as the theatre critic for the Charlottesville Daily Progress from 1982 to mid-2015. She has been recognized by the Virginia Press Association for her reviews, and has won numerous other awards for writing and editing.

Tell us what you think!

This is the second critical review of local theater published by Charlottesville Tomorrow.  Would you like to see more? Please leave a comment below or write us at arts@cvilletomorrow.org.