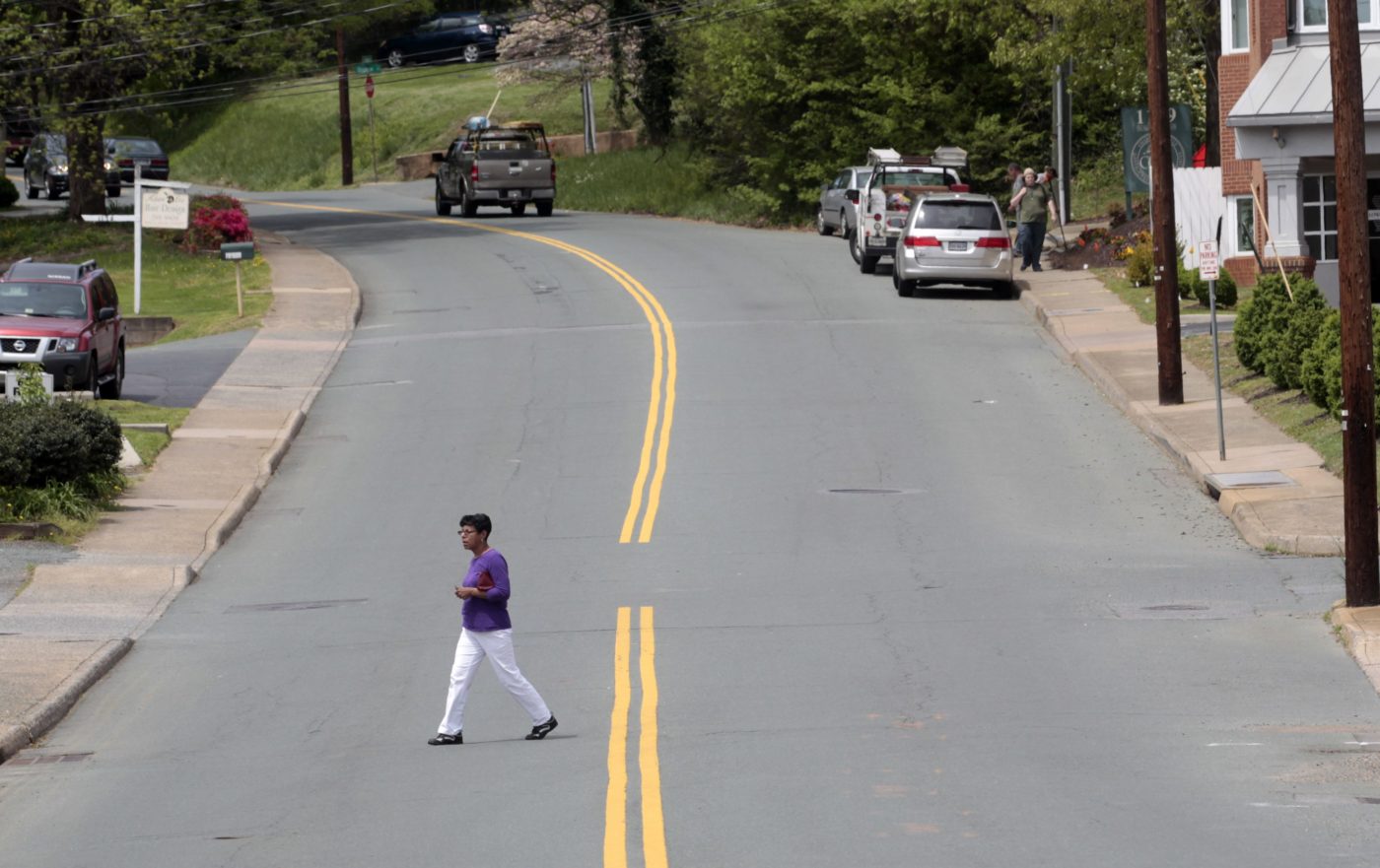 As Charlottesville develops a new bike and pedestrian plan, some residents who live off East High Street near the Rivanna River want planners to address obstacles to non-motorized access to the rest of the city.

Jessie Chapman’s home on Hazel Street in eastern Charlottesville is less than a mile away from restaurants in Belmont or on the Downtown Mall, but the architect said incomplete sidewalks prevent her from feeling like she lives in a “walkable” city.

“We are within walking distance, but we just don’t have a safe route,” Chapman said.

In February, the City Council adopted a policy calling for “complete streets,” meaning redevelopment should include new sidewalks, bike lanes, street-trees and other amenities.

“We spent a hundred years in our society being conditioned to think of the road as the realm of the car and that pedestrians and anyone else not driving a car is trespassing,” said city planner Brian Haluska.

But how fast can East High Street get new sidewalks? The road is a relatively narrow street where driveways and the road are indistinguishable in some locations. Many residents say it is currently far from “complete.”

“The sidewalk situation is dire along High Street, barely navigable even for the able-bodied, with unannounced 4-foot drops at intersections and narrow, broken concrete in other places,” said Amy Lemley, another area resident.

Those conditions, Chapman said, make some of her neighbors reluctant to take their children to Onesty Pool on Meade Avenue on foot even though it’s only half a mile away.

“There are all these people with kids around here, but if they don’t feel comfortable, they’re not going to walk there,” Chapman said.

Haluska recently met with Chapman and photographer Tom Daly, another Hazel Street resident who is becoming active in his neighborhood. The pair originally reached out to Haluska to find out how to encourage commercial redevelopment near their homes.

Haluska said he thinks it’s unlikely the area will be redeveloped anytime soon because of small lot sizes, steep topography and the attractiveness of other land within the city’s 10.4 square miles.

“There are areas that are flat that are close to downtown,” Haluska said.

Haluska also said redevelopment is ultimately in the hands of property owners, who might not be ready to make a change at this time.

“If the landowner doesn’t want to do anything, there’s nothing you can do to make them,” Haluska said.

For instance, many of the properties in between the U.S. 250 Bypass and East High’s intersection with Meade Avenue are owned by the same company.

Daly said he understood, but pressed on with a desire that his neighborhood might take on a slightly more urban feel.

“We’ve kind of established that the lower part of High Street might be slightly untouchable for the time-being, but perhaps going up the hill a little bit where La Michoacana is, I’d like to see restaurants and maybe a coffee shop,” Daly said.

The city’s “entrance corridor review” guidelines match Daly’s vision for the section of East High Street between Gillespie Avenue and the bypass.

“Properties here have potential to be redeveloped at an urban scale with shallow setbacks, higher density and mixed uses,” reads the guidelines, which were affirmed in 2011.

Those guidelines were patterned after a 2000 study of the city’s major streets by the firm Torti Gallas. The report suggested the East High Street commercial corridor be improved by burying utilities, limiting signage to small ones and completing sidewalks.

The report also led to a comprehensive rezoning of the city in 2003, which created a High Street zoning district that enables redevelopment by allowing a mix of commercial and residential uses. This tailor-made district spans from the intersection of Meade Avenue to Locust Avenue.

Bruce Odell, of the Martha Jefferson Neighborhood Association, said he would like to see the upper section of East High Street be redeveloped with a mixed-use “urban feel,” but that he believes the city would need to widen the road to make that vision a reality.

“The key to this is widening East High between Meade and Free Bridge to alleviate the traffic congestion,” Odell said. “At a minimum, the city needs three lanes, either with the center one dedicated for turns or even rush-hour reversible lanes if this can be done technically.”

Odell pointed out that the current Free Bridge Congestion Relief Project — a study coordinated by the Thomas Jefferson Planning District Commission — might suggest solutions to make that happen.

“If the Free Bridge task force can ‘fix’ the traffic circulation problem at the bridge, that would be an ideal lead-in to moving forward with an upgrade of lower East High Street — making the ‘entrance corridor’ a reality,” Odell said.

But in the meantime, Chapman and Daly are concerned about the existing conditions.

Currently, they say they use Moore Street, a private street with an easement for public right-of-way, to get to destinations on East High.

But when they get there, there’s no sidewalk or crosswalk.

“You don’t have a great line to be able to get to something on the other side of the street,” said Amanda Poncy, the city’s bike and pedestrian coordinator. She pointed out that landing points for crosswalks would end up in the driveways of businesses, which are not in the city’s right-of-way.

Poncy said the narrow character of East High Street means it likely can’t serve the purposes of all possible means of travel.

“It is probably going to be an auto and pedestrian corridor as it develops,” Poncy said. “There’s probably not enough room to accommodate bikes on this so we would be thinking about it in terms of complete networks.”

For instance, bikes could be encouraged to use Meade Avenue and Market Street to get downtown. Doing so also would eliminate a tough climb up East High.

There’s a crosswalk at the intersection of Hazel and East High, but it does not lead to a sidewalk and pedestrians share space with vehicles seeking access to businesses.

Another obstacle is the intersection where Meade Avenue meets High Street.

“You can stand here for half an hour waving your hands,” Chapman said. “People will holler at you and they don’t stop because they come in off of Free Bridge and they’re still in highway mentality.”

While no changes are currently planned for the area around Hazel Street, the City Council has funded a reconfiguration of East High Street’s intersection with Lexington Avenue in the coming year, as well as other streetscape improvements around the former Martha Jefferson Hospital.

That building is now home to the CFA Institute and will house other offices in the future.

There is also $300,000 in funding in next year’s capital improvement program for another “small area plan.”

High Street is on the list for such a plan, but it is competing with many other areas.

In the meantime, Poncy is coordinating the update of the bike and pedestrian plan. A public meeting to explain the process is scheduled for June 18. A final report will be presented to the council next winter.