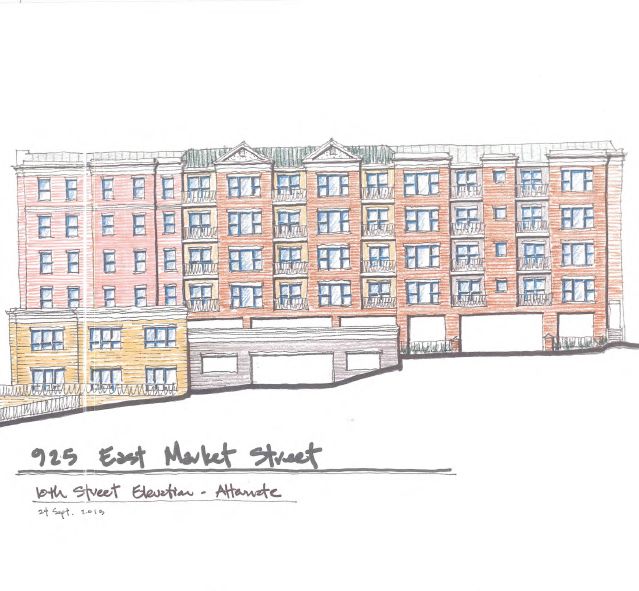 Charlottesville’s City Council has approved a special-use permit that will allow a five-story structure with 56 residential units to be built at 925 E. Market St.

One councilor voted against the project because she said it did not go far enough to improve the city’s network of sidewalks.

“It’s very disappointing that there are two large, 24-foot-wide garage door openings on a small street separated by just a 36-foot-wide patch in between,” Councilor Kathy Galvin said. “It is already a very, very dangerous situation for pedestrians going up and down 10th Street.”

However, the four other councilors voted to approve the project, which is being built by CMB Development and Woodard Properties.

“I think this is a good location for higher density and they have tried to deal with the [garage entrance] issue as best they can,” Mayor Satyendra Huja said.

Councilor Kristin Szakos said the project would build a portion of sidewalk on the northern side of East Market, something that would not happen if it were not approved.

“[Tenth Street] is not a very attractive place to walk no matter how beautiful you make it because of [the steep] slope,” Szakos said. “There’s more good than bad in this.”

Some residents of the Martha Jefferson neighborhood wanted councilors to withhold support until they addressed additional traffic that will be generated by several new developments in the vicinity.

“Locust Avenue is in danger of becoming another entrance corridor,” said Harry Holsinger. “The traffic is fast. It says 25 miles per hour but I doubt there are many cars that drive that speed.”

“The ‘main street’ for this area is the Route 250 Bypass and the route to get there is Locust Avenue or East High Street, and there needs to be some relief,” said Bruce Odell, president of the Martha Jefferson Neighborhood Association.

Jim Tolbert, the city’s director of neighborhood development services, said the council could not require improvements to be built several blocks away as a condition of approval.

“In order to impose conditions on an applicant, you have to be able to show a direct correlation between that project and what you’re trying to do,” Tolbert said. “But if you look at the big picture and the totality of development that may happen, that says we need to take a look at the impacts.”

After the vote to grant the permit, the council voted to direct staff to come back with a plan to reconfigure Locust Avenue to reduce the impact that increased traffic will have on the neighborhood.

“The traditional answers don’t always serve our community well when it comes to street design,” Councilor Dave Norris said. “Is this an opportunity to look at how we can better regulate traffic flow and better accommodate other uses on Locust Avenue?”

Tolbert said bike lanes on Locust possibly would require removing on-street parking in front of several residences that don’t have driveways. City Manager Maurice Jones said he will have a report for the council at its Oct. 21 meeting.

“It’s hard to build new construction that’s going to be affordable to very low-income residents,” Norris said. “With the dollars, though, we know we are working with programs that are addressing the issue.”

At the end of the meeting, Galvin asked councilors if they would be willing to form an advisory committee to help guide the city toward achieving its goal of having “complete streets” that serve more than just automobiles.

“We are not consistently building our pedestrian and bike infrastructure ahead of development,” Galvin said. “As we do increase the number of people living here we’re going to need a lot more pedestrian [paths].”

Councilors agreed to direct the Planning Commission to study Galvin’s resolution before they take their own vote.