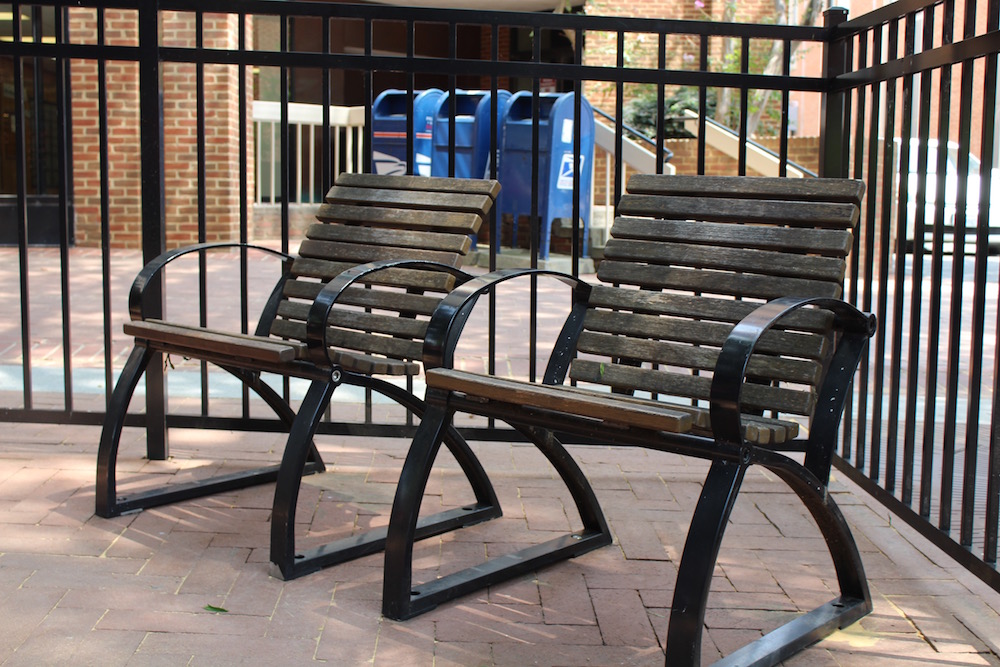 These wooden slatted chairs were installed in 2009 and are reportedly deteriorating and difficult to maintain. In April, the Parks Department's request to replace the 19 chairs currently on the mall with metal, backless benches in stock was denied.

Do people need more places to sit freely on Charlottesville’s Downtown Mall? What stake do businesses on the mall have in the locations of benches? How can seating decisions make the mall more inclusive?

These questions are being asked and answered by local government and business leaders. Amid conflicting ideas, efforts to replace or add seating have stalled out.

“We need to be good stewards of that place we call the Downtown Mall,” said City Councilor Kathy Galvin. “It’s the place where all kinds of people meet and engage. And it gets right down to what kind of chair you have.”

In April, the city parks department asked the Board of Architectural Review for permission to replace the 19 wooden slatted chairs currently on the mall with backless, single-unit benches. The department already has such benches in stock, and several of them have been installed in front of City Hall. The wooden slatted chairs were installed in 2009 and are reportedly deteriorating and difficult to maintain.

The BAR unanimously denied the request because the backless benches are not consistent with Lawrence Halprin’s original design for the mall, according to BAR Chairwoman Melanie Miller.

“Lawrence Halprin is a nationally recognized landscape architect. It’s a real treasure that we have some of his work in Charlottesville,” Miller said. “To me, it’s exactly what our job is as a Board of Architectural Review to keep that intact.”

“If you do anything on the mall, you have to respect that it’s a historic, controlled district, and that means you can’t do just anything,” Fenwick said.

“The charge of the Board of Architectural Review is to make sure furnishings we put on that mall are compatible with the original Lawrence Halprin design,” Galvin said. “We’ve got a cultural landscape that we need to take care of.”

“Generally, [backed] benches of this nature run $1,200 to $1,500 for a single 24-inch unit,” Parks Division Manager Doug Ehman wrote in an email to Charlottesville Tomorrow.

Miller said the department bought the backless benches without approval from the BAR and that they were expensive, as well.

“I would argue that it doesn’t make sense for the BAR to ignore our guidelines to cover for an error made in ordering by the parks department,” she said.

The department has the option of appealing the BAR’s decision to the City Council but has no intention of doing so at this time, Ehman wrote.

According to Ehman, the department won’t pursue attempts to replace or add seating on the mall without further input from the BAR.

“Unless we receive guidance from BAR as to a specific chair that would be acceptable, we consider the matter settled,” he said.

But the BAR has no plans to provide such additional guidance.

“It’s not generally our job to redesign projects or source benches or things like that,” Miller said. “Our task is to determine what is or is not appropriate based on our guidelines.”

BAR members may take it upon themselves on their own time to research benches for the mall, but the BAR has no official role moving forward unless the parks department returns to the BAR with another request, Miller said.

Miller did say that efforts are in place to obtain original Halprin benches from places around Charlottesville such as Venable and Burnley-Moran elementaries. These benches could be placed in storage for safekeeping and used as a model for future efforts to create new benches for the mall, she said.

The benches proposed by the parks department are backless to discourage loitering, according to project application documents from 2016.

Only having backless benches on the mall would exclude people looking to rest on a backed chair, Galvin said.

“We should in no way be providing furniture that is in some way designed to exclude people, be they homeless people or people with disabilities,” Galvin said.

The business community would have a stake in the placement of additional benches on the mall, according to Joan Fenton, board chairwoman of the Downtown Business Association of Charlottesville.

Fenton said the impact of benches placed directly in front of businesses is usually negative.

“You often have people hanging out that keep customers from wanting to come in your store. It doesn’t always happen, but in the past it’s been a problem for several businesses,” she said. “The benches were repositioned several years ago to lessen that impact, and I think it’s been fairly successful.”

If discussion of adding benches to the mall were to resume in the future, Fenton said DBAC and individual businesses will want a say in seating placement.

But until then, Miller and Galvin share the concern that there simply isn’t enough seating on the mall.

“Unless you’re a paying patron of a cafe, there are very few places to sit,” Miller said. “We think that is a detriment to the mall, and the mall should be for everyone.”

Galvin added that different people need different kinds of seating, and the mall needs to reflect that.

“We’ve got to promote a diversity of urban experience on the mall, and that means having places where people can sit and relax, of all ages and income groups and ethnicities and races,” she said.