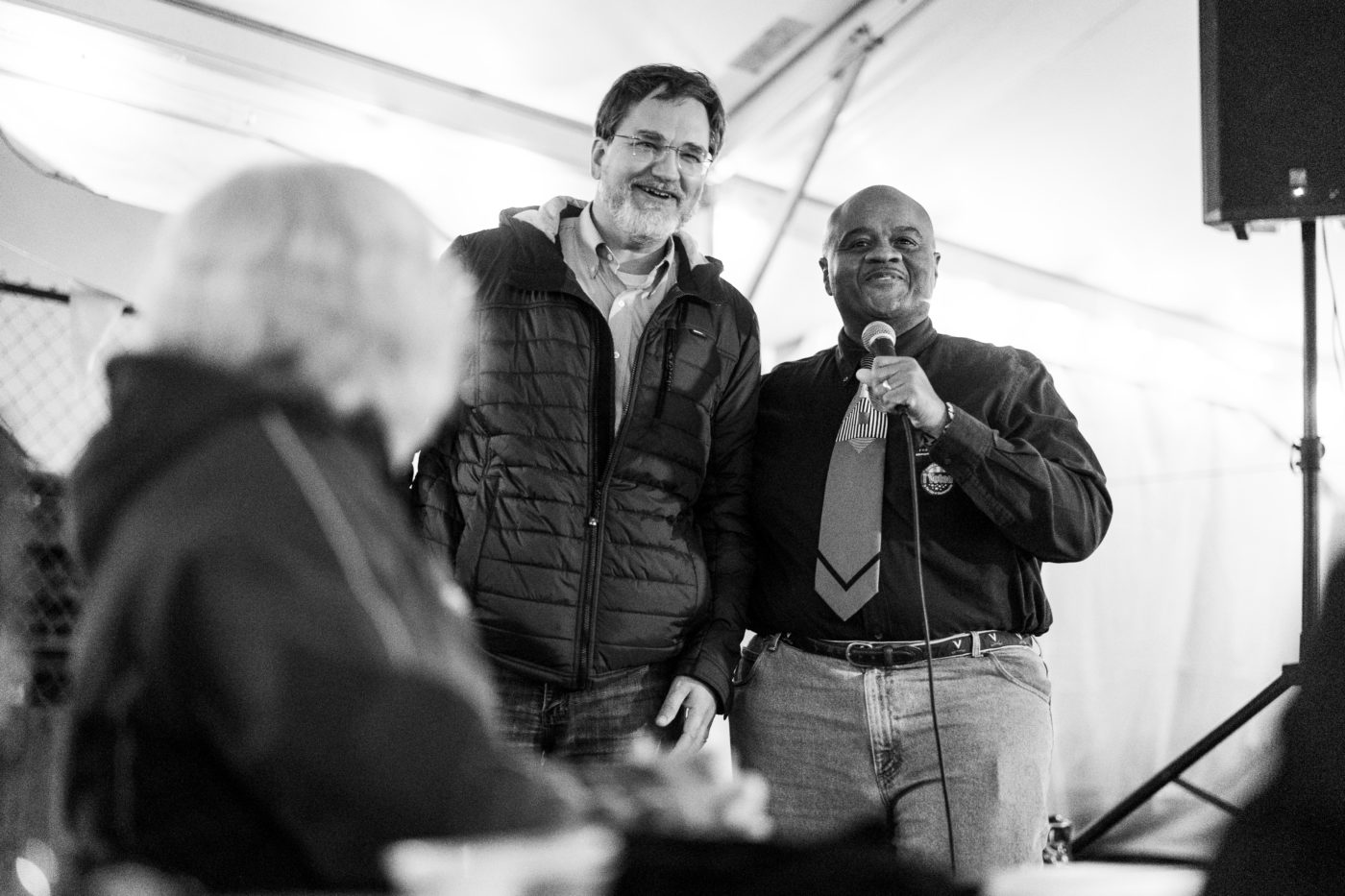 Brian Pinkston (left) and Juandiego Wade (right) speak outside of Champion Brewing on Nov. 2 after results indicate they would win their election to Charlottesville City Council

A crowd of about 100 gathered at Champion Brewing in downtown Charlottesville on Election Night. As the first frost of the season began to move in, conversations happened over chilled beers while television screens displayed the results of the gubernatorial election.

While the governor’s race was called in favor for Republican Glenn Younkgin after midnight, locally, the Democratic-leaning city and county saw Democratic candidates ward off independent or new challengers.

Though Mayor Nikuyah Walker dropped out of the race in September, her name was still on the ballot and she received just over 7% of the votes tallied Tuesday night.

Tuesday night’s results include nearly all local precincts, including any early in person voting, and some mail in absentee ballots. Registrars will continue to count any absentee ballots they receive by mail until noon on Friday. They will also resolve any provisional ballots that were used. Those votes aren’t expected to change any local election outcomes.

As of 11 p.m. Tuesday, Wade had nearly 43% of votes and Pinkston had nearly 37% with 11 of 12 precincts counted. Washington had nearly 13%. The two candidates with the most votes win the at-large race.

Wade said that he and Pinkston already have a meeting scheduled with current council members for Wednesday so that they can get acquainted with each other before officially starting in their council seats in January.

He noted the big decisions he and Pinkston will immediately be involved in come January — hiring a new city manager and new police chief.

“We need to start a dialogue to really be able to work together,” Wade told Charlottesville Tomorrow on Tuesday night. “We are ready to roll.”

As a longtime school board member who was previously involved with area nonprofits and worked in local government, Wade said he is prepared for his new role and eager to continue serving the community.

Pinkston and Wade each thanked Walker and Washington along with outgoing Councilor Heather Hill in their victory speeches a little after 9 p.m. when they said they were “confident” they had won.

As the gubernatorial election drew national attention, locals flocked in higher numbers than the last gubernatorial election to the polls Tuesday where they also voted for city council, county board of supervisors seats, both school boards, and a handful of General Assembly House of Delegates seats whose districts touch Charlottesville and Albemarle.

“Whenever there is an election, we make an educated guess about the number of people who will turn out based on historical turnout in previous elections,” he said. “We were just unprepared for the turnout we had today. It was a staggering number of voters that came out. It was very unusual for a gubernatorial election.”

The high turnout was likely due to this year’s hotly contested governor’s race, which polls had labeled as a “toss-up” in the weeks and days before the election.

The race received national attention and was considered a bellwether that would forecast national election trends. As such, both parties pushed voters to turnout.

Wade explained that as a local Democratic candidate he did his best to stress the importance for Democratic constituents to vote up and down the ballot this year for democrats. Maintaining a majority in the House of Delegates and having a governor, lieutenant governor and attorney general in the same party will make it easier for the state government to carry out policy priorities that local governments could benefit from, he said.

Del. Sally Hudson, who represents Charlottesville and parts of Albemarle, sailed through reelection to her second term with 78% of the vote.

Other House of Delegates candidates in the area were hoping to flip Republican-held seats in the House — portions of which include Charlottesville or Albemarle County.

Sara Ratcliff challenged longtime incumbent Rob Bell in the 58th District, while Ben Moses faced off against Matt Farriss in the 59th District. Additionally, Augusta-county resident Jennifer Kitchen challenged Chris Runion for a second time. The challengers did not succeed at flipping the red seats blue. Bell, Fariss, and Runion all earned over 60% of the votes by 11 p.m.

The Charlottesville School Board race, meanwhile, included five candidates vying for three open seats. By the end of the night, incumbent Lisa Larson-Torres along with newcomers Dom Morse and Emily Dooley appeared to have won.

At 11 p.m. Tuesday, Larson-Torres had nearly 24% of the votes, Dooley and Morse each had just over 21%, while incumbent and longtime member Leah Puryear had just over 18% and Christa Bennett — who was endorsed by Wade — nearly 15%.

As current board chair, Larson-Torres said in an interview with Charlottesville Tomorrow on Tuesday night that she’s worked to ensure the school board is proactive about its budget. She added that it’s crucial to work towards solutions for the bus driver shortage and the need for more substitute teachers. It’s also important for the board and City Council to continue their work toward the $75 million Buford Middle School and Walker Upper Elementary School reconfiguration project.

She also reflected on the challenges presented by COVID-19 over the past year. For her, it reasserted the significance of school boards at helping to handle challenges for students, staff and families.

“Nobody could forecast something like [the pandemic] happening and how it impacts students and teachers and public school systems, let alone the community,” Larson-Torres said. “It unfortunately amplified a lot of the disparities in healthcare, food security and all kinds of things. That’s bigger than the schools but the schools are so much a part of taking care of our kids and the community is really invested in the schools.”

In Albemarle County, school board chair Graham Paige won against write-in candidate Randy Zackrisson. The race was previously uncontested — as many local Albemarle races were — until August when Zackrisson announced his candidacy after the deadline to appear on the ballot.

As of late Tuesday, Paige had nearly 74% of votes with eight of nine precincts counted. An unnamed write-in candidate garnered just over 26%.

Write-in candidates rarely win on Election Day, Albemarle’s Electoral Board Vice Chair Rodemeyer said. The last time a write-in candidate won in Albemarle County was 27 years ago when Sally Thomas won a seat on the county’s Board of Supervisors.

Zackrisson’s bid for the seat fell as debates around parental voice and critical race theory emerged in the governor’s race and raucous school board meetings in Loudoun County were making national news.

Meanwhile, back at the state-level, despite an early lead by Youngkin, the gap between him and Democrat Terry McAuliffe had narrowed by late Tuesday night. At his rally in northern Virginia on Tuesday, McAuliffe did not concede in his speech — noting the lingering deadline for absentee ballots to be received.

“We’ve still got a lot of votes out,” he said. “We’re still going to count all the votes because every single Virginian deserves to have their vote counted.”

By Wednesday morning, McAuliffe conceded the race in a statement, wishing Youngkin well and reiterating policy goals he hopes Virginians will continue to work on like funding education, raising minimum wage faster, and protecting affordable health care and voting access. McAuliffe also noted protecting a woman’s right to choose — an issue that Youngkin, who is pro-life has opposed him on.

With between one or two point margins between the governor, lieutenant governor and attorney general candidates — and 99.9% of early and day-of voting already tallied — the GOP ticket became a series of “firsts” for the state. Youngkin is the first Republican to be elected since 2009 while Lietutenant Governor-elect Winsome Sears is the first woman of color elected to the seat and Attorney General-elect Jason Miyares is the first Latino elected to a statewide office. 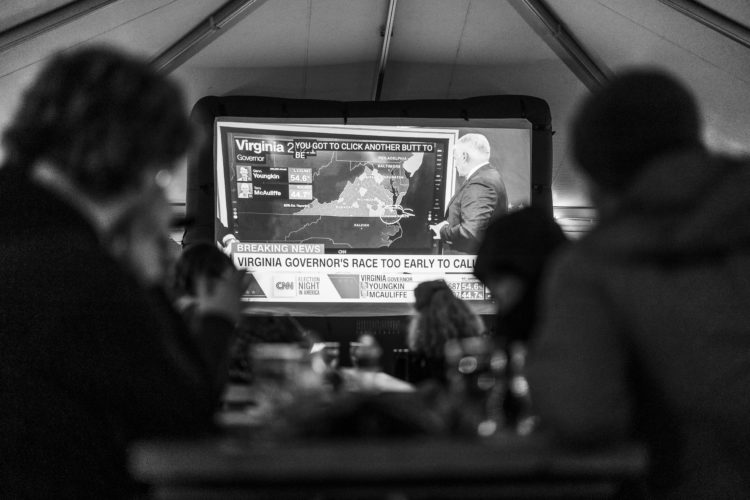 A screen outside Champion Brewing displays election coverage of Virginia's gubernatorial election during a gathering for local Democratic candidates in Charlottesville and Albemarle County.