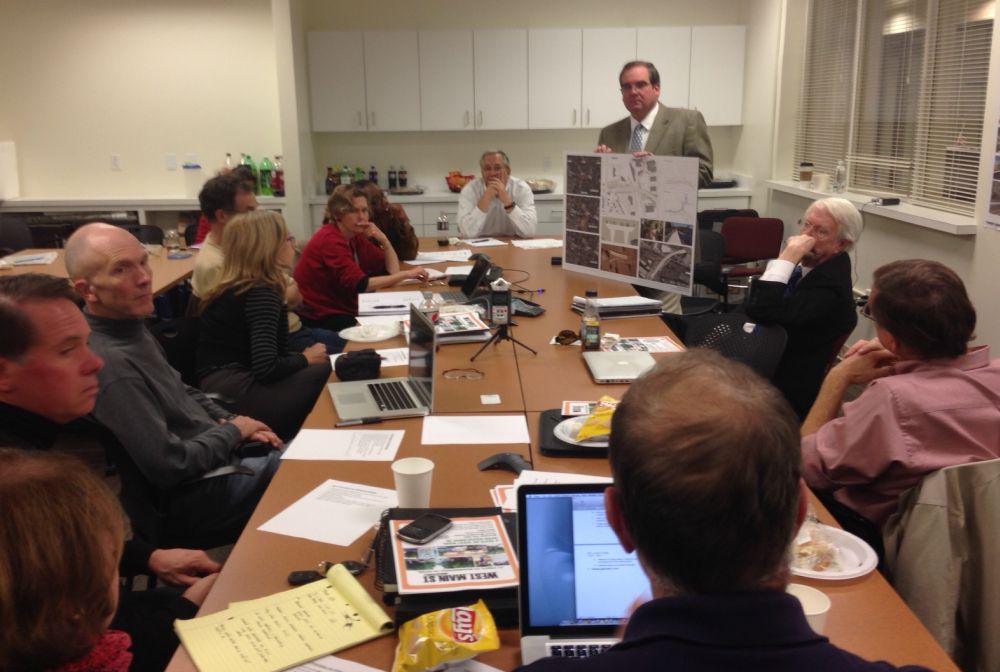 A volunteer group formed to advise the Charlottesville City Council on the design of public infrastructure has recommended that an “enhanced” Belmont Bridge be more narrow and should encourage economic development of immediately adjacent land.

“Developing a scheme that integrates those properties into the bridge is critical to making things work,” said Richard Price, a member of the PLACE Design Task Force.

“How could those properties be redeveloped and how can they appropriately meet the edges of the bridge?” Price asked.

The task force was initiated by Councilor Kathy Galvin shortly after her election in November 2011 to oversee public infrastructure to ensure it helps advance city goals.

The city has been in the process of designing a new Belmont Bridge for several years after the council approved a plan to replace the bridge rather than repair it. The Commonwealth Transportation Board has approved a $14.5 million budget for the project, which is scheduled to be advertised for construction bids in 2015.

The firm MMM Design was hired to design the bridge with input from the public. Its work was criticized by some in Belmont who thought a highway-focused design did not provide a sufficient pedestrian and bicycle link between their neighborhood and the Downtown Mall.

Filmmaker Brian Wimer held a design contest in February 2012 that sought new ideas. The winning entrant called for removal of the bridge entirely and to replace it with an at-grade crossing. However, the council did not endorse that idea.

Instead, the city hired landscape architect Pete O’Shea and architect Jim Rounsevell to sift through contest entries to see what ideas could be extracted. The pair developed two options. One would be a bridge with enhanced amenities for pedestrians and cyclists, and the other would be an underpass that traveled below the railroad and Water Street.

City staff maintains the underpass would be more expensive than the bridge, and would have many logistical barriers including strong opposition from a railroad company that will not allow its operations to be affected by construction.

In October, the council directed staff to seek more input from the public about what an “enhanced” bridge would look like.

“They wanted us to go back to the public before we started doing any more design work,” said Jim Tolbert, director of the city’s Neighborhood Development Services office.

A public meeting will be held at CitySpace on Thursday, but members of the PLACE Design Task Force gave their opinion at a meeting last week.

Critics of the bridge argue the current structure is out of scale with the rest of the area and holds back economic development.

“The underpass had appeal because it minimized the scale of the bridge,” Galvin said. “It gave the sense that you could reclaim the area around it for development.”

Price said he wanted to find a way to use the bridge to help integrate vacant land on Old Avon Street into the city’s urban fabric.

“Can we propose some solution for infill development that makes that approach look less like a bridge and more like a street?” Price asked.

PLACE member Rachel Lloyd has been a vocal proponent of restricting the bridge to one lane in either direction. Currently, there are three vehicle lanes over the structure.

“We’ve looked into that and the traffic engineer tells us that two lanes will work,” said Joe Schinstock of MMM Design.

The bridge will be designed to carry more than 20,000 vehicles a day, 5,000 more than it currently carries, Schinstock said.

The city is keeping the bridge at its existing maximum width in order to avoid purchasing any right-of-way or opening up an environmental review.

Another request from PLACE was to make the lighting friendlier to pedestrians as opposed to having the lamps high on poles to illuminate the roadway at night.

“After the public meeting, the idea is that [MMM Design] will come back and do some drawing and then come back to [PLACE] for discussion,” Tolbert said. “And then we’ll go back to council for a final decision.”

The council first held a public input session on the bridge in November 2010 to ask the public many of the same questions.

“Basically, what we’ve heard is that folks want a great pedestrian experience on both sides of the bridge, great bike access, as little vehicular-use space as possible, an opportunity for mountain views, green approaches and improved connections to the mall, Water Street and Belmont,” Tolbert said.