Even without a mandate, most students in Charlottesville and Albemarle are still wearing masks 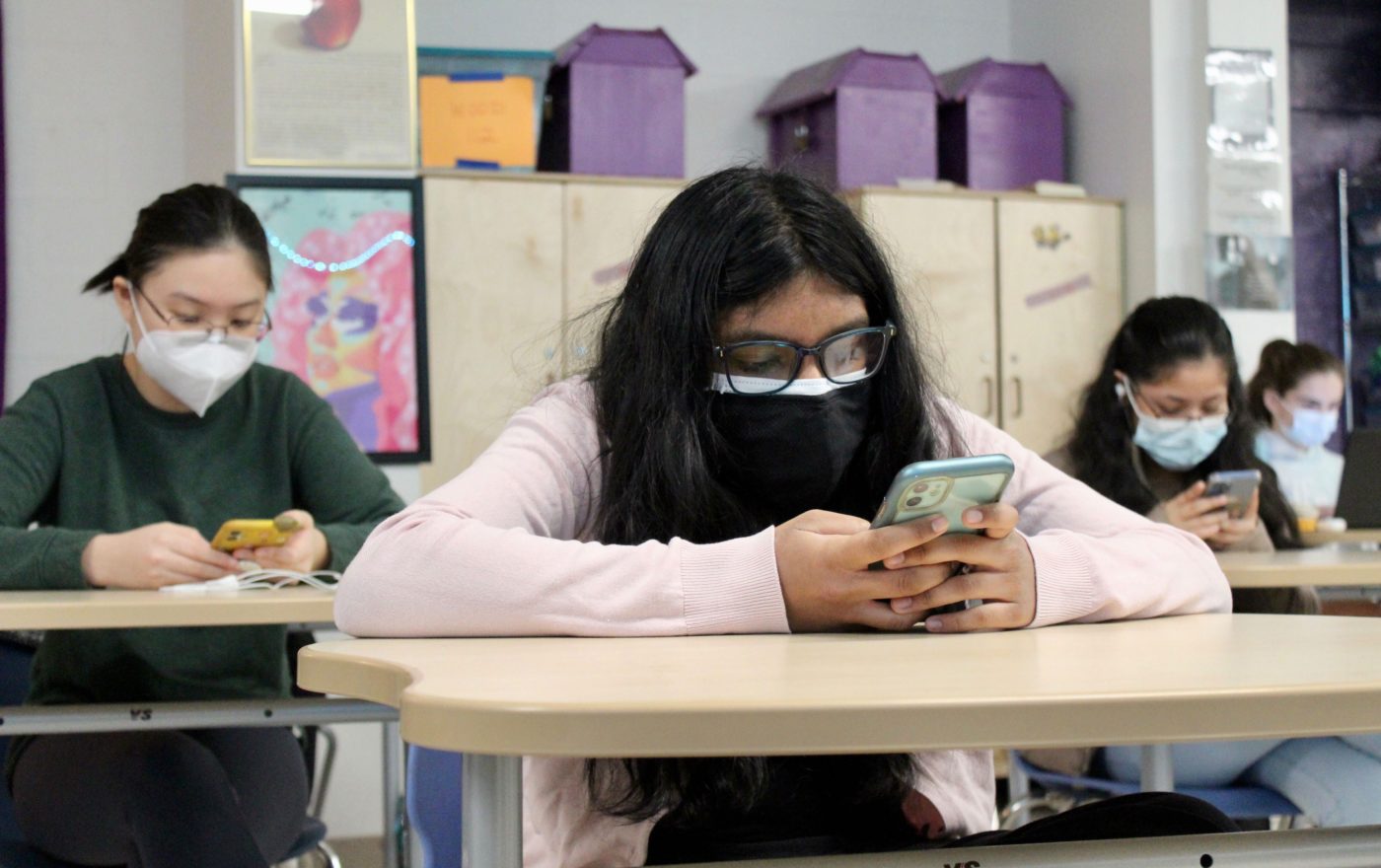 Students in an Albemarle High School class complete an assignment on March 9. Though the mask mandate ended on March 1, most students in the school continue wearing masks.

Tonya Cooper is concerned for her asthmatic grandson, Savhon, a second-grader at Johnson Elementary School.

Savhon’s mother already submitted documentation stating that she wanted her son to continue wearing his mask.

He’s “a bit nervous,” Savhon said behind his gray cloth mask while walking home from school in early March. But since the law took effect, most students are still wearing masks, Savhon and other students report.

Days before the mandate ended, the principal worried about the social repercussions students might face from classmates. He didn’t know which way students would sway, and worried that students could be singled out for their choices.

Parents were also concerned, he said. Many reached out to Kennard about what they should do to ensure the safety of their children while in school.

“The kids again showed us this is not something difficult to handle,” Kennard said. “We really haven’t seen any negative consequences socially or any disruptions at all.”

So many students continue to wear their masks that it can be confusing to see people not wearing them, said Rachel Rugumayo, a junior at Charlottesville High School.

“I feel it’s insensitive to not be wearing a mask because you never know what somebody else’s conditions are, or if their relatives are immunocompromised,” Rugumayo said. 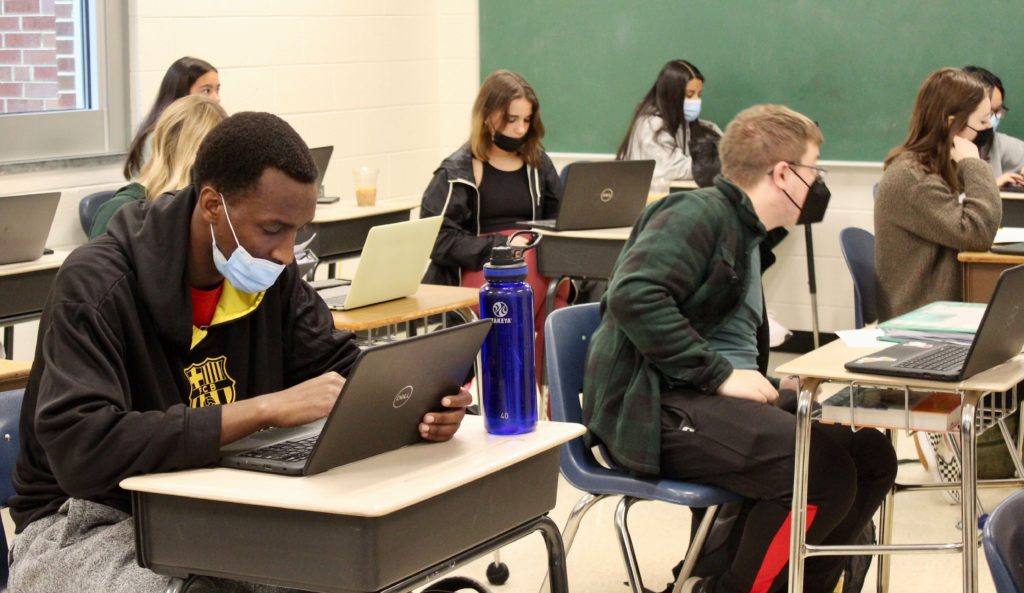 Students work in an Albemarle High School class on March 9. Though the mask mandate ended a week earlier on March 1, most students continue to wear masks.

Elsa Coffey, a freshman at CHS, noticed some students who stopped wearing their masks on March 1, but quickly went back to masking when they realized they were in the minority.

More than 80 AHS students walked out at 9:30 a.m. on March 1 to protest the mask law. Students at the walkout held signs proclaiming “Protect our community” and “I want my friends safe.” The school’s student newspaper, The Revolution, reported on the activism.

Kaitlyn Bitrick, junior at AHS, recalls the experience as being mildly underwhelming but empowering. There were some students who tried to distract the crowd by dancing or making crude jokes, she said, but the interruptions did not detract from the walkout overall.

“I thought it was really cool that they were trying to express how they felt,” Bitrick told Charlottesville Tomorrow.

Parents and family members have also expressed concern over the new law in numerous emails to both superintendents obtained by Charlottesville Tomorrow through a public records request. Some are more combative than others.

Albemarle’s superintendent Haas received a complaint from a parent about an Albemarle teacher’s tweet.

“I estimate about 95% of our students stayed masked today — and the ones who didn’t were the ones whose masks were always halfway off anyway,” wrote teacher Mary McIntyre. “I may not be allowed to ask my students to wear a mask, but I thanked the ones who did. #focusonthepositive #teachertwitter.”

The tweet was “malicious and cruel,” the parent emailed Haas. “It could be argued that a child who is unmasked and is not acknowledged by the teacher, and witnesses masked students who are being thanked by that teacher is receiving adverse consequences.”

The law ending mask mandates is the first step in walking back COVID-19 safety protocols in schools.

In Albemarle, the school board was already making adjustments to their pandemic era policies before Gov. Glenn Youngkin signed the law against requiring masks. The school will suspend contact tracing in April, and will only employ it for outbreaks or when transmission becomes “sustained” in a school.

Quarantine and isolation times will be reduced this month as well, according to the COVID-19 Spring 2022 Plan.

The county school board is also considering ending its mask mandate for school staff. Council members, like Jonno Alcaro, the division’s at-large representative, expressed interest in lifting the requirement in schools at the March 17 board meeting.

The Charlottesville School Board has not implemented plans to walk back its COVID policies.

During the March 3 meeting, Charlottesville school board members made amendments to its previous mask policy to adapt to the new law. The revamped policy includes language that encourages students to wear masks instead of requiring it.

“I don’t think we’re out of the woods yet,” said Lisa Larson-Torres, board chair of Charlottesville City Schools. “I think it’s too soon to tell.”

Charlottesville City Schools and Albemarle County will still require mask-wearing on school buses and other transportation vehicles, per federal guidelines.

It’s largely unclear how area private schools are handling the new ban on mask mandates. Charlottesville Tomorrow reached out to multiple private schools requesting information on their COVID policies. One declined to comment, the others did not respond.

The current law does not include language on whether private schools must adhere to optional masking, which places them in a “gray area,” said Neal McCluskey, director at the Center for Educational Freedom at the Cato Institute.

Charlottesville Tomorrow also reached out to the Virginia Association of Independent Schools and the Virginia Council of Private Education for comment but did not receive a response in time for publishing.

Parents of one area private school children have told Charlottesville Tomorrow that their school is not strictly enforcing masking and other COVID safety measures.

“Covenant is a very conservative school,” said Catherine Prudom Gineste, mother of a senior at The Covenant School.

Covenant was among those that did not return Charlottesville Tomorrow’s requests for comment. The school stopped requiring masks in late January after Youngkin took office and issued an executive order lifting school mask mandates, Prudom Gineste said.

Prudom Gineste was among almost 300 “parents and community of The Covenant School” who signed a petition for the school to reinstate its mask mandate.

“So it was disappointing, but not surprising,” said Prudom Gineste.“ My daughter is not happy about it, but she’s wearing her mask and just counting down the days until graduation.”