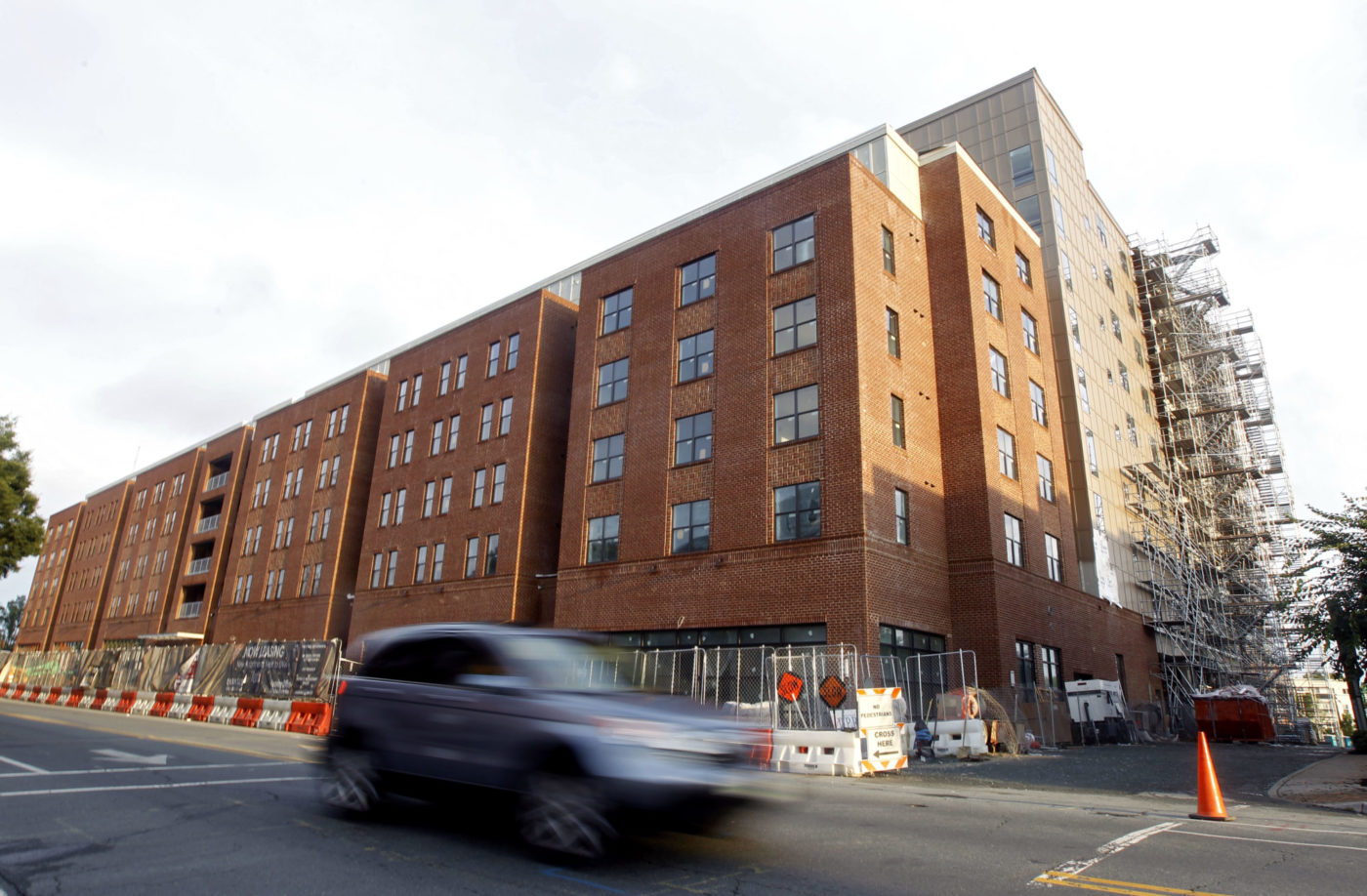 While The Flats at West Village — a large, student-oriented housing complex on Charlottesville’s West Main Street — was approved by Charlottesville’s City Council in December 2012, even some who supported the development now say it does not look like what they were expecting.

Councilor Kathy Galvin, who voted for the project, said now that the 595-bedroom building, which ranges from five to eight stories, is almost completed, she is concerned that it does not look like the project she voted for.

“It looks like the material really was cheapened, the building is flatter, and it doesn’t look as articulated,” Galvin said. “It was in the detail that would have made it look more residential; instead, it looks institutional.”

“The materials that were approved during the multiple reviews at the [Board of Architectural Review] were the materials that we used,” responded Ryan Bourque, a development project manager with Atlanta-based Ambling University Development Group, in a statement provided to Charlottesville Tomorrow.

Galvin said the lack of details in the upper levels and at the rear of the structure make the building look especially large.

Councilor Dede Smith, who voted against the project, also said she was surprised by the current appearance of the building.

“I think it’s even worse than I imagined it would be in terms of its impact on West Main,” Smith said. “Its sheer mass and density far exceed even what I thought it would be.”

In December 2012, the City Council voted to approve a special-use permit for the building after seeing design sketches provided by the developers.

The Board of Architectural Review then voted to modify portions of the building before approving the designs in 2013.

But the designs that the two bodies eventually approved were significantly different. The final design included enclosing an outdoor plaza, increasing the use of HardiePanel cladding and darkening the paint scheme.

BAR member Tim Mohr said the board decided to add a darker color so the building would be less visible from a distance.

“The brown may not be everyone’s choice of a color, but in terms of the contrast, that is what we were looking for,” Mohr said. “I think once the trees come in, the darker color will actually make it recede.”

But the changes, according to Galvin, resulted in a substantially different building.

“To my eye, the board-and-batten materials and design are not at all in keeping with what council saw and approved,” Galvin said. “Because there is now little attempt to break down the massing of the rear elevation, with varied textures, colors and materials that look solid, that elevation is now monolithic and hugely out of scale.”

Smith said she also remembers the original designs looking different from the building she sees today.

“My memory of what was voted on was the front was much more attractive than it looks to be now,” Smith said. “We didn’t have very good images of … the back part.”

But according to Mary Joy Scala, the city’s preservation planner, the City Council was only given the current building’s design at the time, and the developers knew they would still have to go in front of the BAR.

Scala also said the council was voting only on a special-use permit to allow additional density and height to the building, not on the building’s design.

Additionally, Scala said if the developers did not like the modifications handed down by the BAR, they could appeal the decision to the council.

According to Galvin, if she had seen the design that was eventually approved by the BAR, she would have had a difficult time voting for the building.

Galvin, who is also an architect, said one of the main reasons for the lack of consistency came out of a need for a form-based code and increased guidelines for city staff and developers.

The city is working to combat the problem with the West Main streetscape study.

While much of the attention has so far been spent on a possible reduction in parking spaces and increased bike accessibility along West Main, the city also hired a firm to work on the possible creation of a form-based code to allow a city to achieve a specific urban appearance. Code Studio was brought on board for $48,000.

The standards of a form-based code designate “the appropriate form and scale … of development, rather than only distinctions in land-use types,” according to the Form-Based Code Institute.

“I do sort of feel like it was fundamentally a flawed zoning that got us where it was,” Mohr said. “It seems promising to go to more of a form-based code where we really understand what the implications of the zoning setbacks and the mass.”

Councilor Kristin Szakos also said she would be willing to look at the process and see if changes should be made.

“If under current regulations, we can get something that we don’t want, then we need to look at the regulations,” Szakos said. “To a certain extent we can tell [developers] what we don’t want, but there are certain things that they can do within the law because it’s their private property.”

According to Galvin, revising the city’s zoning laws and creating a form-based code would help provide clarity in a sometimes confusing and lengthy process.

“This is not a developer’s fault, this is not staff’s fault; I’m not blaming anyone,” Galvin said. “I’m looking at a process that has too many faults in it.”

And while the West Main streetscape study was supposed to have been completed by now, the final recommendations are still undergoing review and are not expected to go in front of the council until this fall.

“What’s really unfortunate is that the West Main corridor design project didn’t occur sooner,” Mohr said. “It’s kind of the cat is already out of the barn.”