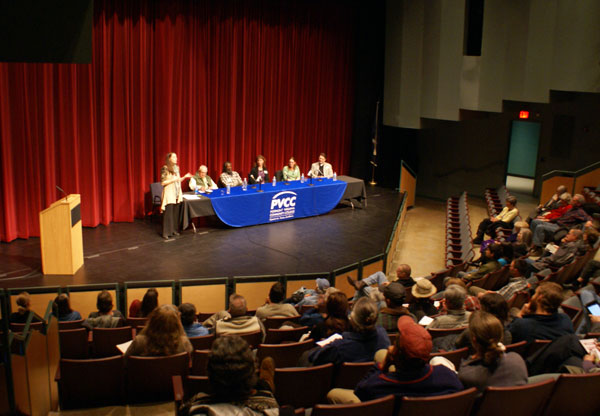 In a true “farm to table” offering, farmers growing fruits and vegetables and raising goats for meat joined a representative from the food hub and a private-school chef to explore the challenges of growing, distributing and preparing local food.

“Our goal is to bring farmers and people in the farm industry together to share success stories,” said Meghan Murray, a Ballyshannon board member. “We wanted distinct and diverse backgrounds on the panel, because success for some doesn’t mean success for others.”

“Just because we’ve had the growth of CSAs and farmers’ markets in our community, that doesn’t mean that all farmers just started selling at farmers’ markets and now it works for everyone,” Murray said.

CSAs — Community Supported Agriculture — allow the public to buy into a local farmer’s operation, providing them a source of winter income.

Kathryn Bertoni and her husband run Nelson County’s Appalachian Star Farm, which is in its 10th season selling vegetables and eggs.

“CSA subscribers sign up in winter or early spring, and pay most of the money up front,” Bertoni said. “During the growing season they get a weekly box of diverse vegetables.”

The Bertonis deliver their vegetable boxes for their CSA subscribers to farmers’ markets in Charlottesville, Nelson County and Lexington.

He told the audience of about 50 at Piedmont Virginia Community College’s Dickinson Auditorium on Thursday that local farmers have to be creative selecting and selling their products.

“We want to make Charlottesville the goat burger capital of America,” Turner said to applause. “Meat goats are the most widely eaten red meat on the planet.”

Turner said his meat is available at the Black Market Moto Saloon and that strong demand for goat meat in this country will outstrip the supply for at least the next decade.

While his farm is not certified as organic, he says there is nothing but organic resources going into his goats.

“If the animal existed before the feed store, I think God was telling you it was possible to raise those things,” Turner said. “It’s very satisfying when you can live in harmony with nature. I am a steward of the land and I intend to leave it better than when I found it.”

While goat burgers haven’t yet hit the lunch line at St. Anne’s-Belfield School, executive chef Trey Holt is making sure there are plenty of local fruits and vegetables.

“To get kids more connected to where there food is coming from is incredibly important,” Holt said. “One of our challenges is getting it out to the kids that this is what we are doing. When they see an apple, they see an apple, so we struggle with the marketing.”

Holt said one way they plan to strengthen the connection is to take the students to a local farm in April.

“We are taking all students to a farm for a week of work,” Holt said. “The little kids will be there in the morning, the big kids in the afternoon, so all 850 kids are going to be there at some point during the week, and I will be there as well so they can see that connection.”

One audience member asked how the public could be motivated to spend more money in the local food economy rather than on “big screen TVs.”

Holt’s answer was simple: “Get them young.”

Lisa Reeder of the Local Food Hub echoed that and encouraged parents to set the example.

“On a family level, you can look at being involved in a farm and involved in food as so much more than just getting your food there,” Reeder said. “It’s outings, it’s digging in the dirt, it’s animals, it’s building a community around it.”

“As an adult, if that’s where we seek our entertainment, our fulfillment, our intellectual satisfaction, and our sense of community, then it becomes easier to [engage] the next generation,” Reeder said.

Of course, being raised on a farm has its advantages.

“When I sit down at the table with my kids and almost everything on the plate came from the farm or someone I know … I feel really great about that,” Bertoni said. “I feel great that my 8-year old son can give one heck of a farm tour and name all 40 vegetables that we grow.”