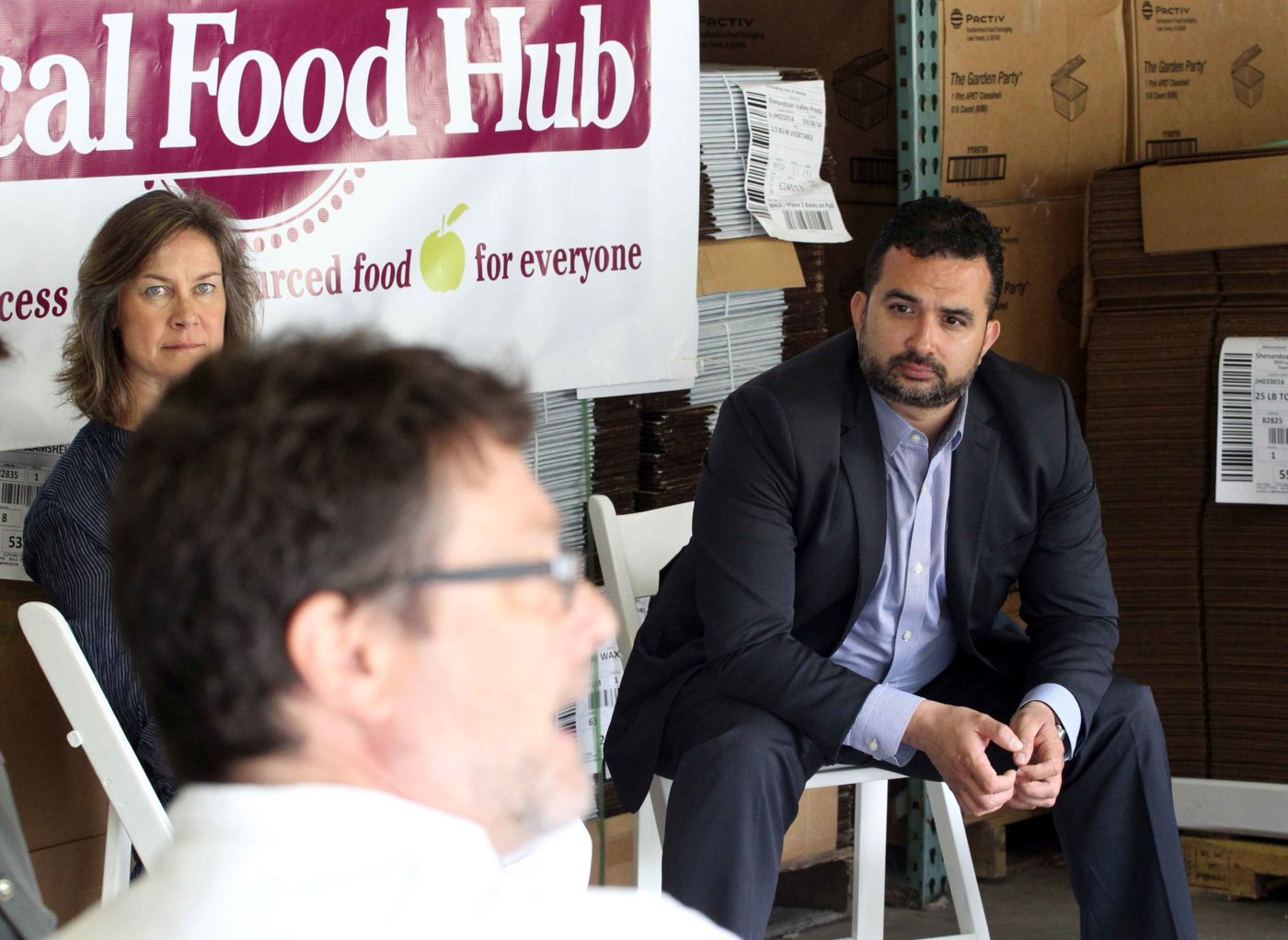 Elvis Cordova, deputy under secretary for marketing and regulatory programs at the USDA

A top official in the U.S. Department of Agriculture visited Ivy on Wednesday to hear lessons learned by the Local Food Hub since the nonprofit organization began operations in 2009.

“Local food has been growing so much in size and in importance,” said Elvis Cordova, deputy under secretary for marketing and regulatory programs at the USDA.

Cordova’s stop at the Local Food Hub was part of a periodic outreach campaign.

“To me as a public servant, I need to hear from the public,” Cordova said. “How can we be collaborating more?”

The executive director of the Local Food Hub said she appreciates the USDA’s willingness to go into the field to learn more from groups such as her own.

“We are a nonprofit organization with a mission to partner with Virginia farmers to increase community access to local foods,” said Kristen Suokko. “We have definitely benefited from many of the great programs that USDA has implemented.”

Cordova took a tour of the warehouse and learned about the organization’s history.

“We came about after a series of meetings within this community mostly between institutional folks who wanted to access more local food and realized the infrastructure wasn’t there to do that,” said Alan Moore, the hub’s director of distribution.

Moore said the Local Food Hub has helped small farmers professionalize and become part of the food network regulated by the USDA and the Virginia Department of Agriculture and Consumer Services.

The Local Food Hub had sought to work with 10 farmers in its first year but ended up serving triple that amount.

“Last year, we worked with between 75 and 80 farms and producers in the state of Virginia,” Moore said. “We coordinate production with them, bring that product here to aggregate it and then, in turn, market it back out.”

Local Food Hub staff work with farmers to ensure the USDA’s requirements that Good Agricultural Practices (GAP) are being met.

“In order to ship, every box needs to be new, so we buy boxes in volume and then we sell them at cost to our growers to help them save money,” Moore said. “Every box is labeled with the grower name [and] the county that the grower is in so we can have traceability.”

That means a recall plan can be issued for every item that comes through the hub.

“Over these last eight years, it’s really been able to solidify, but there’s still a lot to be done and there’s a lot of opportunity to grow,” Cordova said. “We want to make sure we have the right systems in place at USDA so this can be a long-lasting support system.”

At the local level, the hub seeks to provide support to allow small farms to expand.

“The average grower is selling into lots of different market channels,” said Adrianna Vargo, director of grower services for the Local Food Hub. “They’re going to farmer’s markets. They might work with some restaurants directly. They get to a point where they want to scale up.”

And when they do, the Local Food Hub is there to assist.

“There are some young families that are really trying to make a go of [farming] as their full-time occupation, and partnering with us has given them more security in knowing that their sales are going to go through,” Vargo said.

Vargo also helps look for new markets for small farms and helps them become GAP-certified. Some of this work is funded through the USDA’s specialty crop block grant program.

“It’s exciting to see this because it’s seeing how our programs really have an effect on the ground,” Cordova said. “We’ve seen this explosive growth in local foods.”

Cordova said local food is now a $12 billion industry. Nationwide, there are 8,500 farmer’s markets in the USDA’s directory.

“It’s grown over 180 percent in the last six years, and that shows where the movement is going,” Cordova said.