As part of Charlottesville Tomorrow’s coverage of the 2011 local elections for Charlottesville City Council and the Albemarle Board of Supervisors, we have interviewed each candidate to discuss topics such as their qualifications, transportation, land use, and their priorities.

Excerpts from these interviews will be included in the

.  This in-depth resource will be mailed to each voting household the week before the election.  In the meantime, we are making available the complete audio recordings and transcripts of our interviews.

for even more detailed information on the candidates including, bios, campaign finance reports, other videos and podcasts. 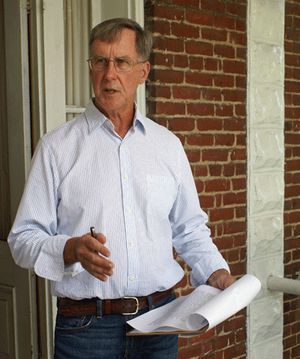 On November 8, 2011, voters in the City of Charlottesville go to the polls to elect their representatives to three seats on Charlottesville City Council.  This recording is Brian Wheeler’s September 23, 2011 interview with

.  Other candidates in this race include:


Please describe your past experience that qualifies you to be on City Council?

What is your transportation agenda for the city? Does it require more money?  How will you fund AND implement it?

How should the city, county and the University of Virginia work together to enhance our community’s unique character and economic vitality?

What changes, if any, would you make to the city’s Comprehensive Plan?

Last month the Charlottesville Regional Chamber of Commerce reported that Charlottesville lost 3,248 jobs during the years 2000 to 2010.  What specifically should city council do to promote employment?

What is your top priority for action by City Council if you are elected?

What would you improve with respect to the city’s parks and recreational facilities?

Are you planning to seek a new vote by the council on the previously approved 50-year water supply plan and how would you change the plan, if at all?

Would you support switching from at-large seats to ward-based representation for elections to Charlottesville City Council? Why or why not?

If the federal lawsuit opposing the construction of the grade-separated interchange for the Meadow Creek Parkway is unsuccessful, will you support completion of the parkway?

Should city council support moving the Rivanna Sewer Pump Station from its current location in Woolen Mills even if it will cost city and county ratepayers an additional $15 million to $18 million to do so?