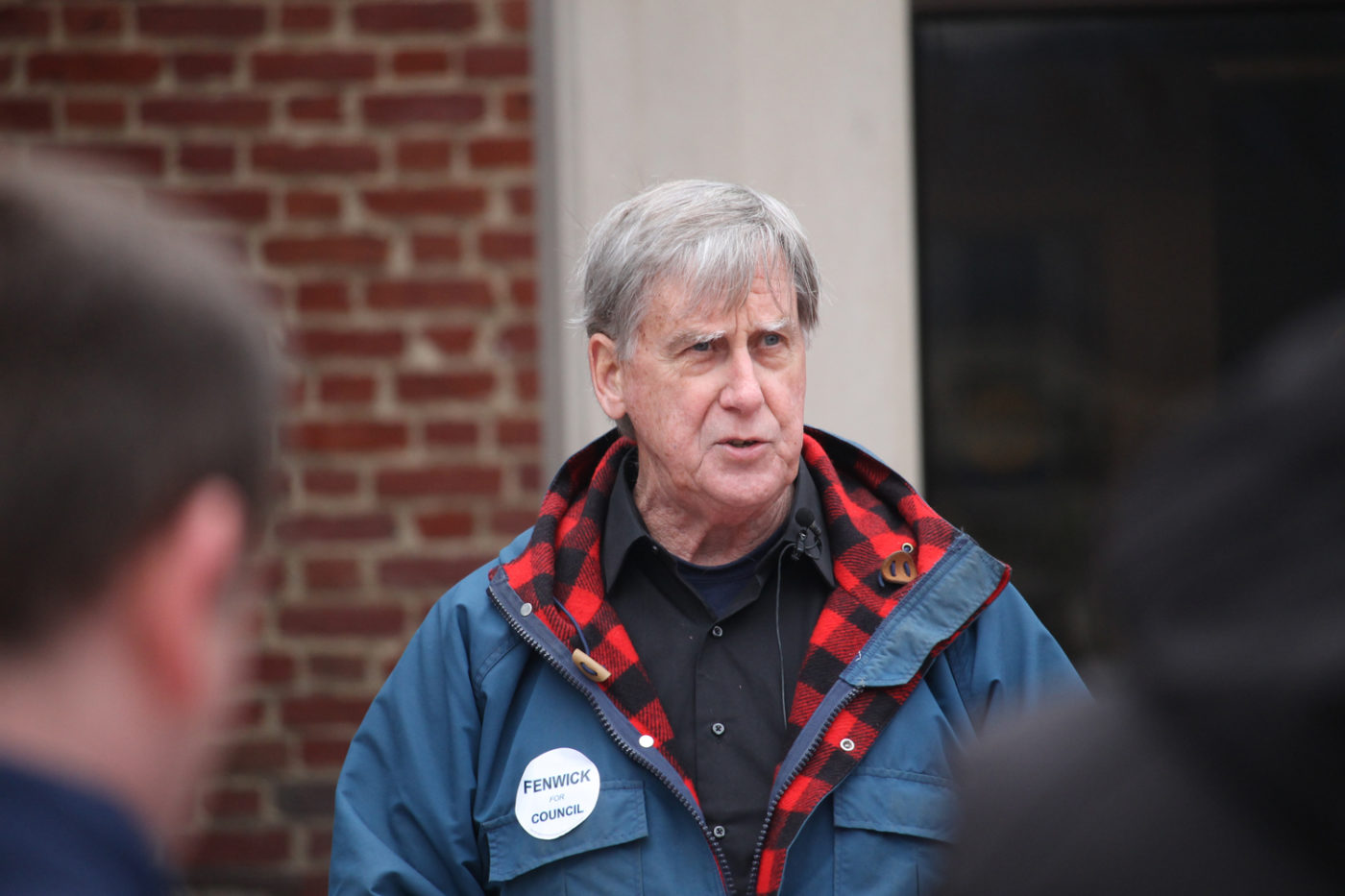 Charlottesville City Councilor Bob Fenwick will seek a second term in order to further address questions about how city government is run.

“Do Charlottesville citizens feel they are in charge of our government and the direction it is taking?” Fenwick asked Friday at the formal launch of his campaign. “Do we have confidence that our voices are being seriously considered when developing policy?”

Fenwick is one of two incumbents whose council terms expire at the end of the year. Councilor Kristin Szakos has said she will step down after serving two terms.

This race will be Fenwick’s fourth for City Council. He ran in 2009 and 2011 as an independent before becoming a Democrat for the 2013 campaign.

In that year, Fenwick placed second in the Democratic primary, edging out now-Councilor Wes Bellamy by five votes after an initial tie.

“Wes and I tied and there were five provisional ballots that would decide the issue,” Fenwick said. “I always figure when I make a speech or answer a question from the media that half the people listening to me voted for someone else.”

This year, Fenwick faces two opponents in the June 13 Democratic primary. Heather Danforth Hill and city School Board member Amy Laufer both made their campaign announcements in late February.

“This will be a sharp, substantive campaign, and I hope the debate will be robust,” Fenwick said. “I fully expect to be outspent, but I will not be outworked.”

Anyone else seeking to be on the primary ballot as a Democrat or Republican has until 5 p.m. Thursday to submit paperwork to the party chairs. No Republican candidates have emerged so far.

Independent candidates have until June 13 to complete the paperwork to appear on the Nov. 7 ballot. So far, three people have begun the process.

Stanford Dale Woodson was the first independent to register, followed by Nikuyah Walker, who made a formal announcement on March 14.

Transportation activist Paul Long also has filed his paperwork to be an independent on the ballot. Long also was on the ballot in 2009 and 2011, but he informally withdrew from the latter race because other independent candidates whom he supported joined the race.

Fenwick said he has spent his time on the council trying to earn the trust of more voters.

“I always have tried to base my decisions on the will of the people,” Fenwick said. “To that end, I have probably attended more neighborhood meetings, community events and have been more open and available to the press than any councilor I can remember.”

Fenwick pointed to one early success as a councilor came when he questioned a project that would have created a citizen’s manual to help Charlottesville residents engage with local government.

“I asked why someone wouldn’t just call the front office and ask them,” Fenwick said. “Don’t bother to reach for your copy of the Charlottesville citizens’ manual because it won’t be there. We saved a ton on staff time and tax money by simply using common sense.”

Fenwick is also critical of the West Main Streetscape project, a plan that has been under development since the fall of 2013. The firm Rhodeside & Harwell is not expected to complete construction documents for new sidewalks, street trees, utilities and other amenities until the spring of 2018.

“Enough with the overpriced and underperforming out-of-town consultants,” Fenwick said. “The West Main consultant has received to date $1.3 million. Next time you’re in the vicinity of the Flats, look around and see if you can figure out what has been done for that much money.”

Fenwick also said the city should do a better job of communicating with the county to head off disagreements such as whether bicycles should be allowed on some trails at the Ragged Mountain Natural Area.

“He is so involved with just every aspect of the community,” Smith said. “He shows up. He listens. I’ve seen him have a position and change it based on what he’s heard in the community and what he’s sussed out from the community.”

Smith is on the steering committee of Equity and Progress in Charlottesville, a group created earlier this year that is calling for greater transparency in city government. EPIC will make endorsements in April following a campaign forum.

“A lot of people encouraged me to run again, but as it turned out, my life has become very full and what I would have to give up was more than I was willing to do,” Smith said.

Long said in an interview that he will not make a formal announcement but instead will lead a protest next month against City Council’s decision to give tax incentives to developer John Dewberry for the Landmark Hotel.

“Some of the candidates are very fine people, but I don’t hear anyone else talking about a lot of the issues that are of concern to me,” Long said. “I don’t think the city is doing enough for homelessness.”

Long also said he wants to find ways to improve the public transportation system to get more people out of their cars.

“I’ve seen traffic congestion get really bad in the 19 years that I have lived here,” he said.

Voters in Charlottesville will also elect three members of the School Board, as well as constitutional officers.

There is currently one open seat on the School Board, as Ned Michie will not seek another term. So far, only incumbents Leah Puryear and Juandiego Wade have announced that they are running.

Jeffrey Fogel and Joe Platania are both campaigning for the Democratic nomination to succeed Dave Chapman as commonwealth’s attorney.