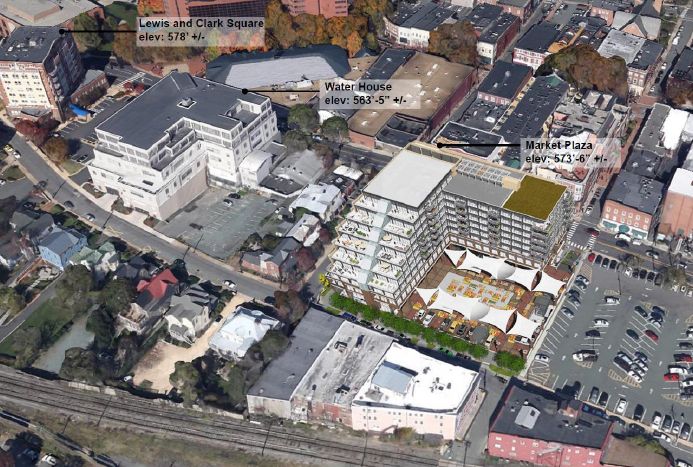 The Charlottesville Planning Commission spent more than two hours last week reviewing the conditions under which it will approve plans to redevelop a city-owned parking lot into a nine-story residential, office and retail building.

As part of a longstanding quest to find a permanent home for the City Market, the City Council voted unanimously in June to select the L-shaped Market Plaza proposal from developer Keith Woodard and architect Gregory Powe. Three other firms also responded.

However, after multiple meetings on the project in October, the Planning Commission could not decide on a recommendation.

After an Oct. 14 meeting, staff drew up a seven-page list of potential conditions required for a recommendation for approval. Many of these related to design issues that at least one elected official said was beyond the commission’s scope.

“I have been here over 40 years but I’ve never seen this kind of list in my life,” said Mayor Satyendra Huja. “There were a number of recommendations that got into design which I don’t think is the subject of a special-use permit review.”

“For the most part, the commission agrees that design issues can be more properly addressed by the [Board of Architectural Review],” Rosensweig said. “I think at the next Planning Commission meeting when we pick up the application again, we will make recommendations on design that affect use specifically.”

One of the potential conditions dealt with the potential closure of First Street to vehicular traffic. Some commissioners have expressed concern about how that would affect traffic circulation.

“If we don’t have the First Street area for the plaza, we don’t have 110 stalls and you have cut the City Market by 20 percent or you eliminate all the retail space on Water Street to extend the plaza,” Powe said.

One commissioner explained her concerns were more related to aesthetics.

“I am not opposed to removing vehicles from First Street nor am I opposed to using it for uses associated with this development,” said Commissioner Genevieve Keller. However, she added that she wants to make sure there is still a “visual linkage” between the Downtown Mall and the warehouse district.

Commissioners decided not to word the conditions on street wall height and setbacks too specifically. Instead, those recommendations will come from the BAR.

Should the project be allowed to have balconies? That will also depend on a BAR recommendation, though Keller expressed her desire to disallow them.

“A concern I have about balconies that are visible in public spaces — do we want Confederate flags and laundry and all the other things that can end up on balconies?” Keller said.

If granted, a special-use permit is a legally binding document that remains in place even if a project does not get built. Commissioner Lisa Green explained that’s why she wants to spend so much time on the conditions.

“We are zoning for the possibility of a Landmark Hotel that sits there and it fails and we don’t know who’s going to take this thing over,” Commissioner Lisa Green said. “We don’t know what would happen to it if something were to happen.”

Another issue is who will operate the 25,000-square-foot open-air plaza that will be in the southeast quadrant, as well as an additional 9,000 square feet that will be indoors.

“The special-use permit includes a request for something akin to event space that can hold more than 300 persons,” Brian Haluska, a planner with the city, said in an email. “This is specifically aimed at the 9,000 square feet of indoor space that will be used by the [City] Market on market days, but could be used for event space on other days.”

Powe’s proposal originally envisioned the open space being dedicated to the city, but said the space likely will be operated similar to the nTelos Wireless Pavilion.

The space would be open unless there is a private event. The details are to be finalized as the city continues negotiations.

“We want it to be safe, secure and used,” Powe said. “The intent right now is for it to be publicly accessible, and we will do that with the smartest legal instrument.”

For the design of the plaza, the city’s Tree Commission has strongly recommended the incorporation of more trees. That body was created by the City Council in 2010 but it has no statutory power under Virginia law.

“We feel we have sensibly placed trees already and I would rather have fewer [but] healthy trees than a bunch of trees,” said Powe. He added that more trees likely would mean fewer stalls for market vendors.

“The commission must act on the [request] at their November meeting in order to satisfy the requirement that they act on such requests within 100 days of receiving them.”

“At that point, we will most likely make a recommendation to council,” Rosensweig said. “We can recommend denial, approval as submitted, or approval with conditions.”

Once the commission makes a recommendation, the City Council will take up the item, presumably at its first meeting in December.

The BAR will hold its review after the council makes its determination.

“I think we made good progress at the work session,” Rosensweig said. “I hope it’s streamlined our efforts to make a good, informed recommendation to council at our next meeting.”