Panelists debate the fiscal costs and desirability of population growth 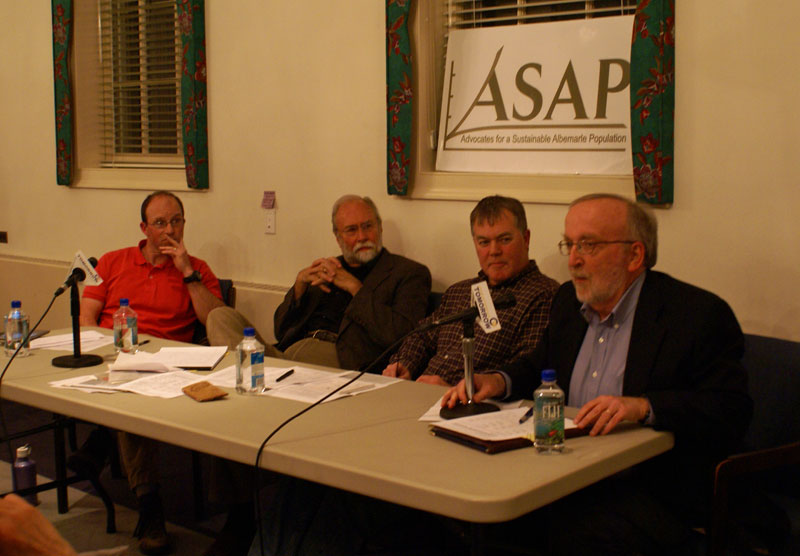 The conventional wisdom is that when people building and selling homes meet up with activists opposed to further population growth they don’t often find a lot of common ground.

At a forum hosted by Advocates for a Sustainable Albemarle Population last week, there was at least agreement on one big question facing current residents and elected officials as they plan for the future.

The audience of 25, mostly ASAP members, quickly voiced their agreement on the importance of that question.

“We don’t want to restrict growth, and I think saying ‘no growth’ is absurd,” Duncan said. “I think saying ‘unbridled growth’ is equally absurd. Somewhere in the middle, between those two extremes, there has to be some sort of solution.”

ASAP’s retiring President, Jack Marshall, revels in the opportunity to engage population control skeptics. His 11 years at the helm have culminated in ASAP’s publication of seven research studies on the impacts of population growth.

Marshall invited Duncan and Jay Willer, the former vice president of the Blue Ridge Home Builders Association, to debate the findings in ASAP’s most recent study on the fiscal costs and benefits of population growth.

Marshall knows well which statements will motivate his group’s members — and agitate even a panel of friends.

“ASAP’s job isn’t to answer all the questions, but to enrich the dialogue that has been dominated by the power elite that profits from growth,” Marshall said. “Part of the differences of opinion might be in the distance of our vision.”

“None of us would deny that growth is going to continue to occur in the short term,” said Marshall. “But if we extend our vision, as we should, if we really give a damn about our children’s children, and the folks who live here, growth cannot occur forever.”

Willer now serves on the Greene County Planning Commission. He dismissed audience concerns about the number of new homes that have been approved but not yet built in Albemarle.

“Markets are what matters,” Willer said. “Just because a builder or a developer at some point went to the time and expense to get a development approved doesn’t mean that’s ever going to get built. Things might change.”

“I absolutely agree there is a limit to the demands humans can put on the environment,” Willer said. “What troubles me about ASAP is there seems to be a desire and presumed ability to say we can limit this to inside Albemarle County.”

In the audience, Carelton Ray responded that ASAP’s local focus was important.

“Think globally and act locally,” Ray said. “If you are making a start in one place, then maybe it will spread.”

ASAP wants its research to shape the comprehensive plans being updated both by the city of Charlottesville and Albemarle. It has stated the combined community should not grow from its current population of about 145,000 past the 165,000 mark.

David Shreve, who has a doctorate in economic history and is a member of ASAP’s board of directors, served as the report’s editor and adviser.

Shreve said that while commercial and industrial growth appear to bring more fiscal benefits, there are other costs.

“The assumption is that … if a new enterprise comes, they do not require the recruitment of any outside employees, they would hire exclusively from the underemployed or unemployed,” Shreve said. “When you adjust for how they normally operate … it washes out almost all the benefits.”

John Lowry, chairman of the Albemarle County Economic Development Authority, said after the discussion that he thought ASAP was being highly selective in its analysis.

“ASAP passes judgment that business will mostly hire employees not from our county, thus offsetting the tax base benefit,”  Lowry said in an email. “This is clearly a value judgment.”

Lowry points to a targeted industry study released by the Central Virginia Partnership for Economic Development in 2012 that said that for every new job created there would be additional support jobs.

“The basic premise is to set up a straw man,” Lowry argues. “If growth is successfully established as a demon then it doesn’t take long to get to the desired conclusion that smaller populations will preserve the ‘quality’ of life they seek.”

While ASAP’s leaders have sought to have Albemarle set a population limit, Willer and Duncan said they believe many factors will cause the area’s population growth to continue.

“I love and appreciate what this place is and I want to see it maintained,” Duncan said . “I think we need thoughtful growth … we need to evolve and change and become better.”