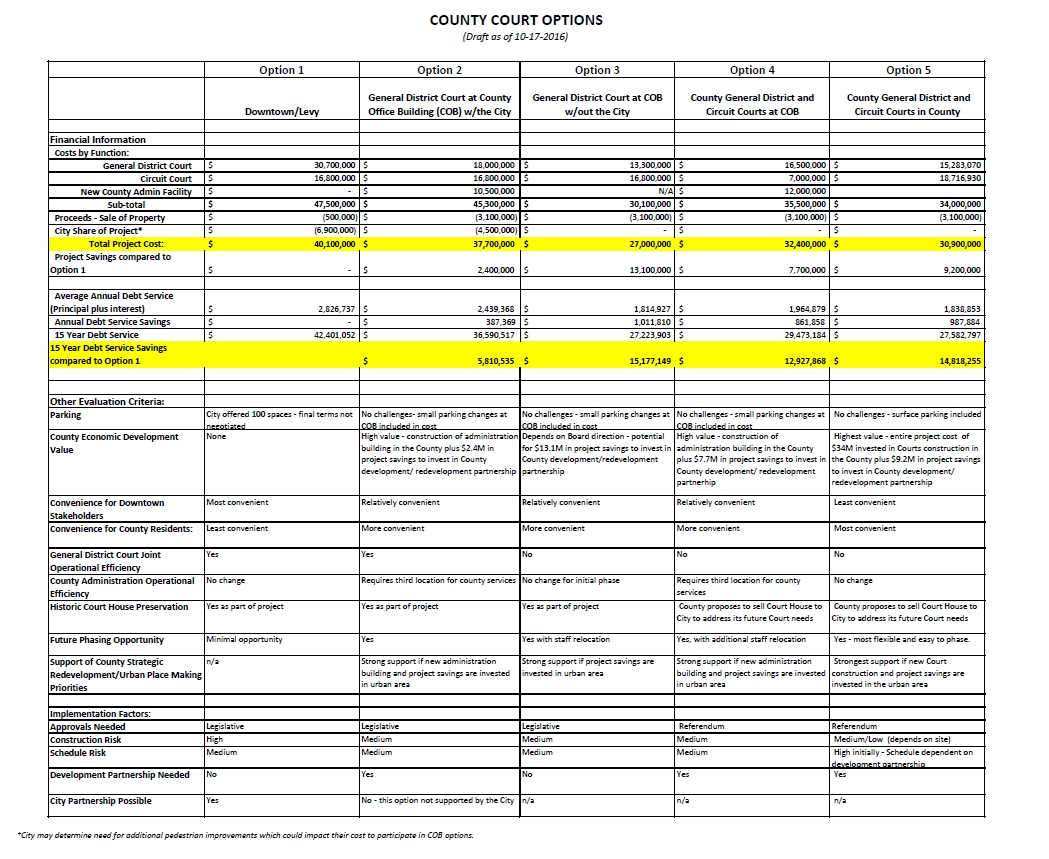 This matrix lays out the details of the five options for Albemarle County courts. See the file below the map.

Albemarle officials have published five alternatives for how the county might pursue expansion of its court system, ranging from remaining in downtown Charlottesville in Court Square to relocating both the General District and Circuit courts to a site within the county.

“As projected caseload activity continues to increase and as our population grows, the facilities and the security they provide are inadequate to meet our current and future needs,” reads a posting on the county website published Monday evening.

The Albemarle Board of Supervisors will hold a public hearing on the options at 6 p.m. Oct. 24 at the County Office Building on McIntire Road.

Bruce Williamson, chairman of the BAR-Bench Committee of the Charlottesville-Albemarle Bar Association, said the hearing might be the only time the public gets to weigh in on the topic.

“Any place in which the courts are not centrally located hurts the users of the court system,” Williamson said.

The concepts were developed by Moseley Architects, a firm that has worked on several previous studies related to expanding the county’s courts.

Albemarle has been studying how to expand the court system for several years.

The U.S. Census recorded a county population of 98,998 in 2010. The county’s population in 2030 is projected to be 134,196, according to the Weldon Cooper Center for Public Service at the University of Virginia.

In 2011, the joint city and county Juvenile and Domestic Relations Court opened on High Street.

An assessment of Albemarle’s other court needs conducted by the firm Dewberry in 2012 concluded that the increased population would cause a need for additional courtroom space.

“Based on the conceptual estimates of a number of options under consideration, a capital investment ranging from $30 [million] to $40 million will likely be necessary, which represents the largest capital investment the county is anticipating during this period,” the county’s online announcement continues.

In 2014, supervisors agreed to work with the city to study a plan to build a joint general district location at the site of the former Levy Opera House in Court Square. The city and county purchased the site in 2005 at a cost of $5.4 million.

However, the Board of Supervisors this past May directed staff to work again with Moseley Architects to examine the possibility of moving some of county’s court functions to the County Office Building on McIntire. That study is reflected in several of the options.

One reason that has been given for the board’s willingness to reopen the issue is a perceived need for more parking spaces.

» The first option is the co-located joint General District Court at the Levy Opera site. This downtown option also would renovate the Albemarle Circuit Court and has a total cost estimate of $47.5 million. However, the city would contribute nearly $7 million for a new courtroom. This money is already anticipated in Charlottesville’s capital improvement program.

» The second option would relocate both the city and county’s General District courts to the County Office Building. The county’s Circuit Court would be renovated in place and this alternative would “create economic development opportunity through investment of the construction budget for a new County Office Building site using a proposed public-private partnership.”

This relocation option would have a total cost of $45.3 million with the city contributing $4.5 million. This alternative would require “minimal parking reconfiguration and partial displacement of existing government functions.” The county’s website notes that the city opposes this option.

» The third option would relocate only Albemarle’s General District Court to the County Office Building. This concept has a cost estimate of $30.1 million.

» The fourth option would relocate both the county’s General District and Circuit Court to the County Office Building. This would involve construction of 40,000 square feet of space, including new offices for the commonwealth’s attorney and staff. This concept has a cost estimate of $35.5 million.

» The fifth option would relocate both Albemarle courts to a new site owned by the county or a private partner. This option would include construction of an 85,000-square-foot building to accommodate the two courtrooms. This option has a $34 million cost estimate and no specific location was noted in the report.

All but the first options involve the county selling its share of an existing parking lot on Market Street that is currently used by S&P Global Market Intelligence. This property was jointly purchased by the city and county as part of the Levy Opera House deal in 2005.

Williamson said he hopes the county ultimately will decide to go with the downtown option, despite the higher cost estimate.

“This is a really significant issue that will affect people’s lives,” he said. “I hope the Board of Supervisors does not turn away years of progress.”

A spokeswoman for the city said the city had no comment on the proposals.