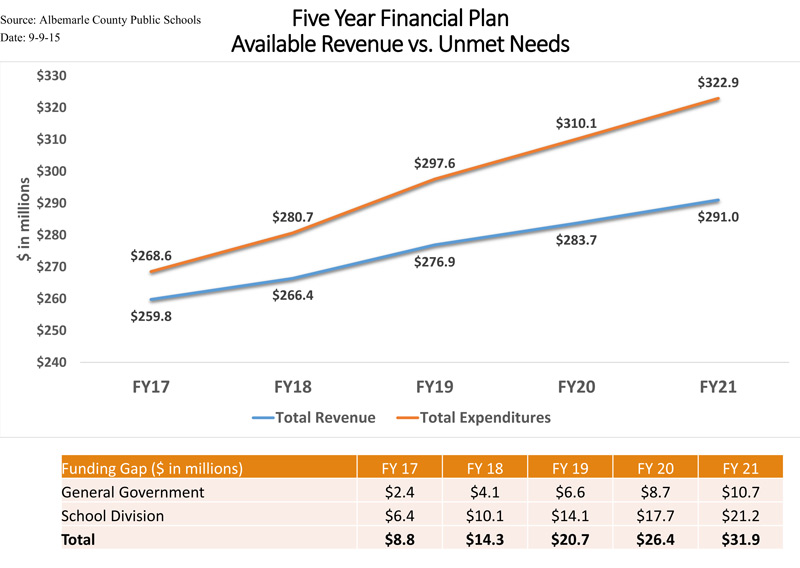 Albemarle County anticipates an $8.8 million shortfall next fiscal year--$6.4 million of which will fall upon the school division.

During a joint meeting Wednesday with the Albemarle Board of Supervisors, Schools officials said the division is anticipating a $6.4 million funding gap to start fiscal year 2017. What’s more, the shortfall could rise as high as $21.2 million by fiscal year 2021.

“If the state can step up and start reinvesting to past levels, that’s going to help that gap significantly,” School Board Chairman Ned Gallaway said.

The update came during a meeting on the five year financial plan, a forecasting tool used by county staff to demonstrate how supervisors’ desired level of government services measures up against the realities of projected revenues.

Schools officials pointed to decreases in state funding and increases in enrollment as the factors driving up their needs.

Since fiscal year 2007, the state’s per pupil expenditure has dropped by $628, from $4,868 to $4,240 per student. At the same time, enrollment growth is causing capacity issues in the school buildings and a need for more staff. For example, to address next school year’s student growth, the division will need to add 17 positions, at a cost of $1.2 million.

Some of those positions will be specialists who work with the division’s growing English as a Second or Other Language and free and reduced-price lunch populations, which are student groups that frequently require services above the division’s per pupil expenditure.

The two bodies also revisited a funding formula commonly known as the “60/40 Split.” Each year, when the Board of Supervisors prepares its budget, it determines the amount of money to be transferred to the school division by considering the amount of new revenue it has received, minus certain future expenditures.

Sixty percent of available new revenue is transferred to the school division with the rest made available to local government.

Bill Letteri, assistant county executive, said the formula was introduced 30 years ago to provide for the reliable, consistent allocation of new revenue.

“It’s not an absolute policy, but a guideline,” Letteri said.

“I think the flexibility affords us a greater ability to meet the needs of the school division and the county,” Buyaki said.

But Supervisor Liz Palmer said she’s still concerned about spending fluctuations the schools are experiencing each year, and questioned if the amount the school division can carry in its fund balance should be raised.

“I’m looking for ways to give the schools a little more flexibility with that,” Palmer said, citing issues such as enrollment growth and the Comprehensive Services Act, which provides services for students with extreme special needs.

Speaking about the financial outlook in general, School Board member Steve Koleszar likened it to “rearranging deck chairs on the Titanic.”

“We have real needs, and if we don’t figure out a way to secure funding, we’re going to see impacts to the quality of life in Albemarle County,” he said.

The joint boards plan to meet again Oct. 14 to discuss compensation and benefits, which will ultimately impact the gap. Another meeting is scheduled for Nov. 11.