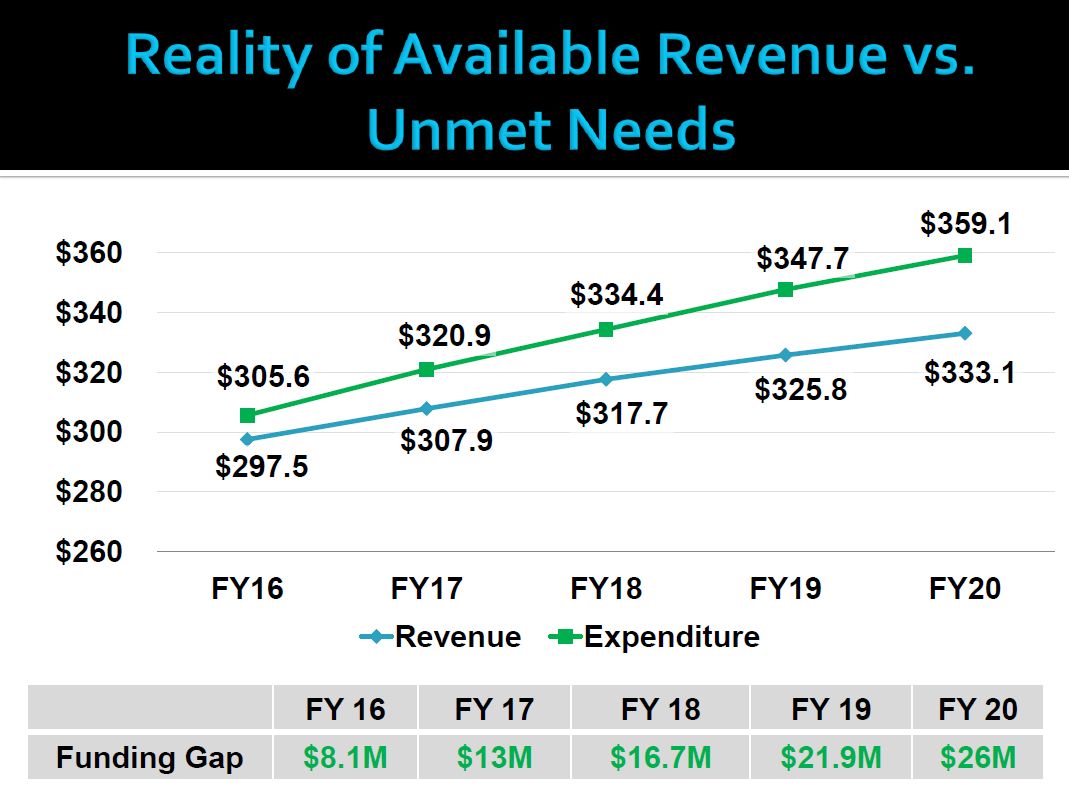 As Albemarle County approaches another budget cycle, county staff has begun preparing the Board of Supervisors to make tough decisions about how to balance its expectations with projected revenues.

“We are much more sluggish in our revenue projections and estimates than we had thought,” said County Executive Thomas C. Foley.

Supervisors were presented with a preliminary five-year financial plan Wednesday. The plan is a forecasting tool used by county staff to demonstrate how supervisors’ desired level of government services measures up against the realities of projected revenues.

For the first time, the five-year financial plan is being developed with both the general government and school budgets.

County staff members are currently projecting an $8.1 million gap for the next fiscal year between expenditures and revenues. That would increase to a $26 million gap by fiscal year 2020.

“We don’t know what’s going to happen in 2020, but this is our best guess,” said Lori Allshouse, the county’s budget director.

However, the actual gap could be even wider as supervisors put forth their wish list for next year’s budget. The preliminary five-year plan does not reflect aspirations captured in a strategic plan developed this summer with input from four new supervisors.

There are no new resources for new parks or greenways, no money to implement master plans in the urban areas and no money to pay for the school division’s new initiatives.

“This is a starting point for a conversation,” Allshouse said.

Another reason for the gap is that the population is increasing as the county continues to come out of an economic downturn. For instance, the budget shrank from $333.7 million in FY2009 to $322.5 million in the current fiscal year.

In that time, the school population grew from 12,531 students to 13,075 students. Additionally, more than 4,600 new dwelling units were built in the county between 2005 and 2012 with most of those rising in its urban area.

“We have a city around the city of Charlottesville that is growing and changing,” Foley said. A more populous growth area means more need for police, a larger fire department, and more social workers.

“Those challenges and unmet needs are only growing because of population growing and student enrollment growth,” Foley said. However, he said tax revenue growth is expected to remain slow because property values are not growing as fast as hoped.

Foley said the state continues to pass new mandates without identifying revenue sources. These include passing on Virginia Retirement System responsibilities to localities and requiring localities to help reduce pollution that reaches the Chesapeake Bay.

“There are challenges at the local level, and the state is clearly going to be making some additional cuts,” Foley said.

“At the end of the day, either expectations have to be scaled back or we have to come up with other ways to fill the gap,” Foley said.

Other ways to reduce the gap could include increasing taxes, paying for capital projects with bonds and perhaps consolidating services with the city.

One supervisor had another idea.

“There have been jurisdictions that have looked at special tax districts,” said Supervisor Jane Dittmar.

Allshouse and Foley did not suggest a tax rate that would be required to fully close the gap. They said they just wanted to show supervisors what conditions are facing the county.

Supervisors did not debate Wednesday on how to bridge the gap. Several supervisors are planning to hold town hall meetings later this month to get feedback from the public.

However, supervisors asked for materials they can show at those citizen meetings.

The Albemarle School Board is slated to hold a Nov. 12 work session on the plan with supervisors. That will be followed up by another supervisor work session Dec. 3 following the town hall meetings.