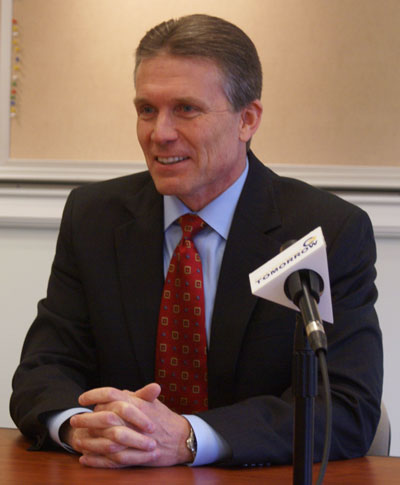 The Albemarle Board of Supervisors has approved a one-year contract and salary increase for County Executive Thomas L. Foley.

Foley, who was appointed county executive in September 2010, previously had his employment governed by a simple resolution of the board.

“This is just a best practice for county administrators and city managers,” said county attorney Larry Davis of the change to a contract, which was unanimously approved Wednesday.

The approval of the contract concludes a performance review for Foley, who succeeded Robert W. Tucker Jr. Tucker never had a contract during his 19 years in the position.

Foley, 52, said he wanted to move to a contract and asked the board to consider his request.

“It’s better to have that because it sets the expectations more clearly,” Foley said in a recent interview.

The move to a one-year contract brings Albemarle into the norm, according to the executive director of the Virginia Association of Counties.

“All of the managers around the state serve at the pleasure of their locality’s governing body and can be expelled at any time, regardless,” Jim Campbell said in an interview.

Campbell added that contracts can be more secure for executives.

“The resolution is kind of a one-way, ‘here’s what we’re giving you,’ as opposed to a contract, which is a two-way agreement,” Campbell said.

Foley came to Albemarle County in 1999 to serve as an assistant county executive. Prior to that he was administrator of Caroline County for five years and for Cumberland County for three years.

Foley said the evaluation process is all about “clarifying expectations” for his leadership of county staff at a time when four supervisors are in their first year on the board.

“It is important to get the direction set clearly, when things are changing so much and there are so many policy considerations underway,” Foley said. “Ultimately, [the board] decides what the goals are.”

“We have so many major policy questions to contend with right now. What are we going to do about landfills, the Comprehensive Plan, the firearms training range, working with the School Board,” Foley said.