Event discusses past, present and future of locally grown food

Increasing awareness of how closely Central Virginia’s history is tied to farms and produce was the topic of discussion at the first Central Virginia Food Heritage Gathering. 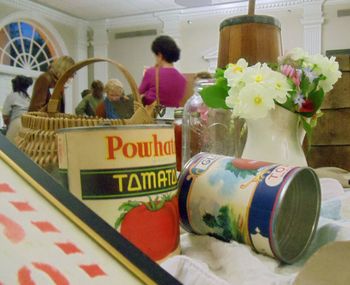 Monday’s event welcomed those invested in increasing local food efforts to share stories and recipes, and to even swap seeds.

“The hope of this project is that by building what we know about our food heritage we will be able to grow a local food system that promotes our food-based heritage,” said Tanya Denckla Cobb , associate director for the Institute for Environmental Negotiation at the University of Virginia and one of the founders of the Virginia Food Heritage Project .

The event featured interview stations to capture locals’ food-related memories and displayed maps where attendees could mark historical food production sites such as farmers’ markets and mills. The Virginia Food Heritage Project will use this information to create an interactive map that will be posted online, allowing anyone to contribute knowledge of historical food sites.

Denckla Cobb stated that the positive impacts of food heritage on the local economy are significant. She briefly named cider, tomatoes and beans as local products that possibly could increase economic vitality of agriculture in the region.

Ira Wallace, employee and owner of the Southern Exposure Seed Exchange , emphasized that the food heritage movement and its ties to the local food movement could be beneficial to increasing the economic viability of farmers in the area.

“The local food movement is creating more jobs that are at a living wage,” Wallace said.

Leni Sorenson , African-American historian for Monticello and a culinary historian who served as part of the event’s organizing team, stressed that by increasing the number of local food events held in the area, tourism revenue could be increased.

“[The Vintage Virginia Apple Harvest Festival] brings in hundreds if not thousands of people,” Sorenson said. “[Food festivals] bring money into our communities.”

Sorenson said one of the keys to the Virginia Food Heritage Project is to make sure healthy, local food is available to everyone, no matter their socioeconomic status.

“We have to devise ways that people not of privilege, people who [do not have] much voice, but who are just as interested in good food and in feeding their families affordable food can have an advantage,” Sorenson said. “This type of consortium offers an opportunity for that.”

Joanie Freeman , founder of the co-op and executive director of the Healthy Food Coalition , said the canners are “trying to bring back commerce out of the African-American community that was lost when Vinegar Hill was wiped out.”

Members of the co-op attended the event in order to gather historical recipes that they will incorporate into their canning. They also plan to include locals’ stories about the history of the recipes and distribute them with the food they sell.

Denckla Cobb has high hopes for the future of the food heritage movement in the region.

“If there’s any community that’s about heritage it’s the Thomas Jefferson regional 5-county area because we live and breathe heritage,” Denckla Cobb said in an interview.

The organization hopes to eventually hold similar events throughout Virginia.

“Tonight’s gathering is a beginning, a pilot project, because what we are doing hasn’t been done elsewhere in Virginia,” Sorenson said.

Denckla Cobb’s students from the food heritage class she teaches at UVa will be screening their interviews with locals about food heritage on May 2 in Room 153 of UVa’s Campbell Hall. She and her students will also present information about Central Virginia food heritage to the Thomas Jefferson Planning District Commission on May 3.