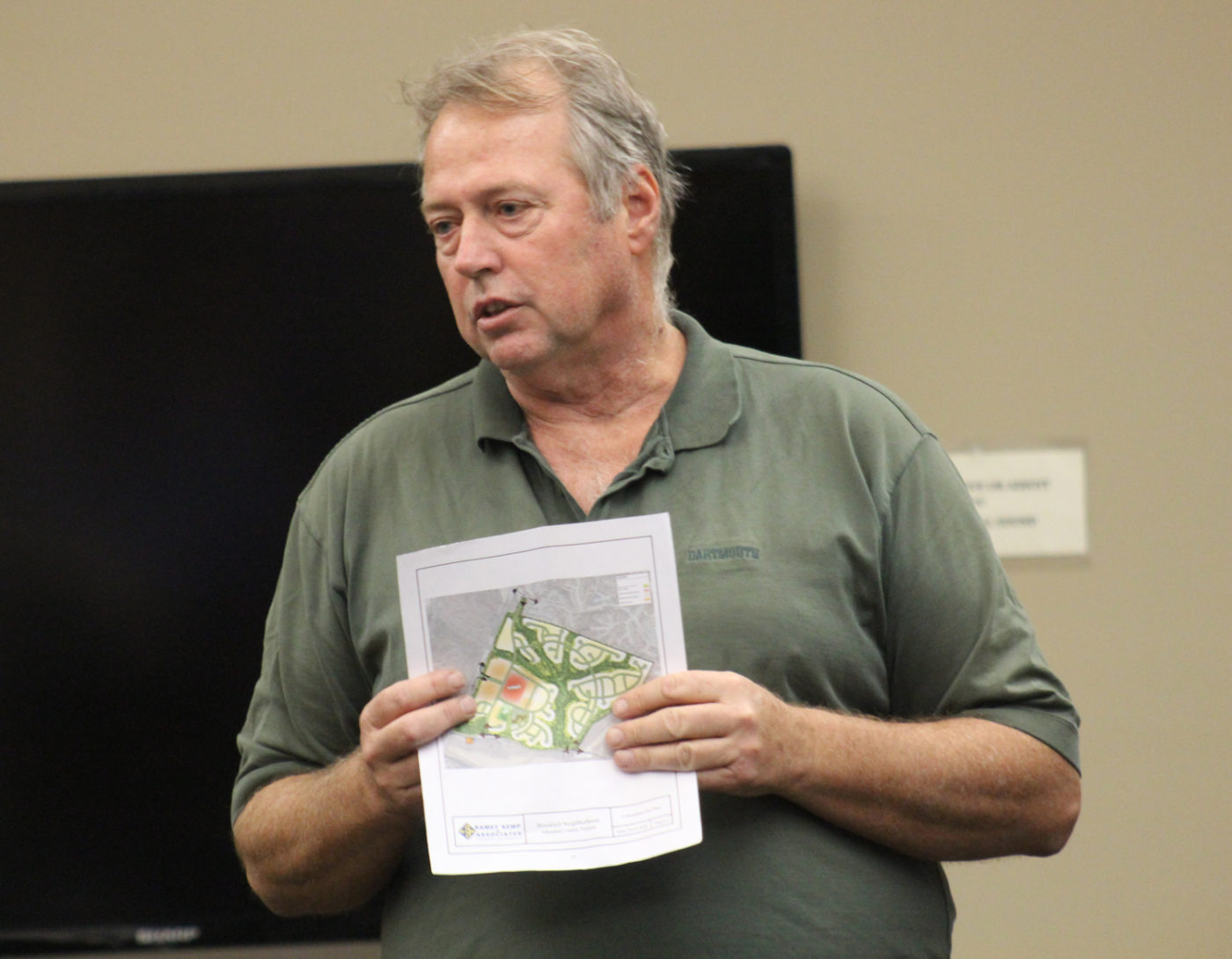 Scott Elliff holds a map of the proposed Brookhill development at a meeting hosted by the Forest Lakes Community Association.

When a rezoning for the proposed Brookhill development goes before the Albemarle County Board of Supervisors in November, residents of Forest Lakes want limits on the road connections to their neighborhood.

“We have a really unique community here,” said Scott Elliff, a member of the Forest Lakes Community Association’s Board of Directors. “There will never be another community like … the enclave of Forest Lakes.”

Riverbend Development is seeking a rezoning of 277 acres between Forest Lakes and Polo Grounds Road. They want land currently classified as single-family residential to be changed to Albemarle’s neighborhood model district in order to have a range of between 800 and 1,550 dwelling units.

There also would be a minimum of 130,000 square feet of non-residential space in three civic areas on the site.

The Forest Lakes Community Association recently held a community meeting at the Forest Lakes Pavilion to focus public input on the road connection, as well as a proposed parking area for county trails.

Virginia Department of Transportation regulations require that new developments have two road connections for neighborhood streets to be accepted in the state road system.

“The term to remember is ‘multiple connections in multiple directions,’” said Adam Moore, an engineer with VDOT’s Charlottesville residency. “That means what we want for any development is that people coming in and out of it will have multiple choices depending on what direction they want to go.”

The regulations were adopted in 2011 and were not in place when Forest Lakes and other county neighborhoods such as Woodbrook were approved for development decades ago.

Riverbend’s plan, recommended by the Planning Commission in August, shows the connection being made across property on Ashwood Boulevard owned by the county. The original rezoning for Forest Lakes South in the mid-1990s deeded land along U.S. 29 and Ashwood Boulevard for a public purpose.

Elliff said there is a concern in the neighborhood that people driving north from Brookhill will use Ashwood Boulevard to get to U.S. 29, clogging up Forest Lakes’ main entrance.

He said he has been trying to get VDOT to back down on the connector road but has been unsuccessful. Instead, he is lobbying to restrict left turns onto Ashwood from people traveling north from Brookhill.

That idea may have potential.

“From what I’ve heard from the community, there is a really strong concern with this and a time-restriction for left-turn lanes might be appropriate to consider,” said Mark Graham, the county’s community development director.

That might mean, for example, that left turns would not be allowed during morning rush hour.

“I am going to be communicating with the other supervisors that there are a lot of issues,” Dill said.

One person asked why Brookhill could not have a second entrance onto U.S. 29.

In response, Moore said, “U.S. Route 29 has been designated as a highway of statewide significance. We are under directions from Richmond that there are to be no other traffic lights on 29 unless there are no other feasible solutions, and we see [the connector] as a feasible connection.”

Crews with the Lane Corman Joint Venture currently are working on a $54.5 million widening of U.S. 29 and Polo Grounds Road as part of the Route 29 Solutions projects. Ashwood Boulevard is in the middle of the work zone.

Elliff said others are concerned about a parking area shown in the northwest corner of the plan that would be used to support a public trail network that will be deeded to the county as part of the Brookhill rezoning.

“It turns out that the trails in Brookhill are being deeded to the county so that they can be part of the county trail system so it can be open to the public,” Elliff said. “Why they’re doing that I don’t know.”

The trails at Forest Lakes are private property and closed to the public. Residents intend to keep it that way.

Acceptance of the Brookhill trails as part the county’s network is considered a favorable factor by county staff.

“Parks and recreation were interested in a trailhead at that location,” county planner Megan Yaniglos said. “It’s up to the Board of Supervisors to decide on whether they want to use our land to do that.”

Attendees at the meeting were concerned about people wandering onto the private trails from the public parking lot. Some said that would lead to crime.

“If it were a parking lot open for anyone to use it, then they would be able to sit there and observe and case the joint and then take action later,” said one man who identified himself as part of his block’s Neighborhood Watch.

“We were looking at the parking lot as something that parks and recreation identified as a desired community amenity,” Graham said. “If the community isn’t interested in the amenity, we’re not going to push it.”

Elliff called the parking lot a nuisance that he wanted removed from the plan immediately.

However, Graham said county staff cannot do that before supervisors hold their public hearing Nov. 9.

“We have to bring to the board what the Planning Commission approved,” Graham said.