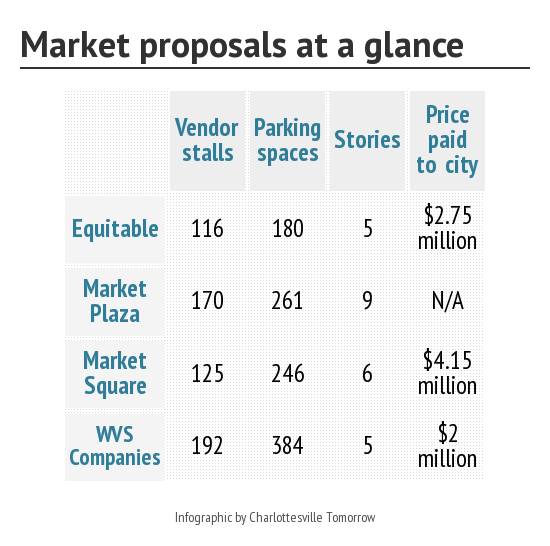 Four private firms have responded to a city request to develop the land occupied by the Charlottesville City Market while retaining the same number of vendor stalls and public parking spaces currently on site.

“The city now has several options to consider that appear to accommodate the City Market and enable significant mixed-use development to occur at this important downtown location,” Chris Engel, the city’s director of economic development, said in an email.

The request for proposals was issued in December after the City Council rejected a consultant’s suggestion that the market be moved to a site on Garrett Street south of the existing location. The market has operated on a city parking lot between Water and South streets since 1993.

Proposals had to retain the 105 vendor stalls that exist today, as well as the 102 parking spaces available to the public when the market is not in operation.

While the proposals only had to include the lot owned by the city, bidders were encouraged to reach out to owners of adjacent lots.

Of the four proposals, one includes the lot currently owned by the Charlottesville Parking Center, though Richmond-based WVS Companies has not yet secured an arrangement to buy the property. The land is assessed at $2.58 million. The proposal also includes a 0.18-acre currently owned by 100 East South Street LLC as a parking lot for a psychologists’ practice. That lot has an assessed value of $479,100.

The WVS proposal envisions two C-shaped, five-story buildings erected on the two blocks with a public plaza in the middle upon which the market would operate, possibly on a daily basis.

The WVS proposal also would provide for as many as 192 market stalls, 40 of which would be located within an “iconic building.” Another 60 would be covered. The rest would be on South Street and Second Street Southeast.

“This is one of the last opportunities for a transformative project in downtown Charlottesville,” said Jason Vickers-Smith, a partner with WVS. “As a group, we wanted something that would be substantial and would create important public and private space.”

Retail space would be provided on Water Street and Second Street Southeast, with four stories of residences. There would be two levels of underground parking providing 384 spaces.

For the city-owned land, WVS proposes either entering into a 99-year land lease or a $2 million purchase. The project has a construction budget of nearly $33 million.

A second proposal, called Market Plaza and led by Woodard Properties, envisions an L-shaped, nine-story structure on both the city lot and the 0.18-acre lot currently used by the psychology practice.

Both the Market Plaza and the WVS proposals include arrangements to purchase the small lot if selected by the City Council.

Under the Market Plaza scenario, the new permanent home of the City Market would be a half-acre plaza paved with brick and stone. This space would be deeded to the city and there would be space for 115 vendors in the plaza, plus an additional 32 potential stalls in an underground parking area. Another 23 vendors could operate on Second Street Southeast if the city allowed closure of the road on market days.

This option would have retail space on both Water and Second streets that would open onto the plaza.

Unlike the other three proposals, this one would have 55,000 square feet of office space. There would be 67 luxury condominiums that would be built in a terrace-like fashion on the upper floors. There would be three underground parking levels with 102 public spaces and 159 spaces for residents and workers.

“We’re trying to create an exciting downtown destination that will support all of downtown businesses, including our own retail space, and we feel the best way to accomplish that is to bring in new residents and to bring in office workers to be customers,” said Gregory Powe, an architect and partner in the project.

Powe said his partnership does not want to reveal its suggested purchase price at this time. A preliminary construction estimate for the Market Plaza project is $35.25 million.

The Woodard proposal details how each side of the project would relate to the existing buildings it would face. For instance, retail storefronts on Second Street Southeast would be in a two-story configuration so as to not to dwarf existing two-story structures on the western side of the street.

The Woodard proposal team has had discussions with the Charlottesville Parking Center about developing its parking lot in a second phase.

“We have designed the Market Plaza concept so that it can be readily expanded into a second phase development of this second full block, with plaza and parking conceived to be easily extended eastward,” Powe said.

Bob Stroh, general manager of the Charlottesville Parking Center, declined to comment for this story.

The two other proposals limit their developments to the city’s parking lot.

The proposal from Boston-based Equitable Real Estate Partners envisions a five-story building. It includes two levels of underground parking, a public plaza in which the market would reside, two levels of retail space on Water Street and four stories of residential units.

Equitable would pay $2.75 million for the land and would provide 116 market stalls in a covered open-space plaza parking area, though it would only operate one day a week. There would be 180 parking spaces.

“The building is designed to transform the current public parking lot into a vital, vibrant ‘live, shop, play’ development,” reads the Equitable proposal. “It will provide a sheltered environment for the City Market and provide a strong urban connection to Market Street along both First and Second streets.”

The fourth proposal, Market Square, also only extends to the city market lot. This proposal, put forward by CBS Investment of Charlottesville, would offer $4.15 million minus the cost of removing any rock or environmental cleanup. There would be 246 parking spaces, 183 of which would be available to the public.

The Market Square proposal would provide 105 stalls on site and 20 additional stalls on Second Street Southeast. Electrical power would be available to a fifth of the stalls. There would be 63 condominiums and 2,800 square feet of retail space.

Each of the proposals will be presented to the City Council at a work session at 5 p.m. Thursday in City Council Chambers.

“I do think the invitation to the community to attend the presentation at the City Council work session is commendable,” said Cecile Gorham, chairwoman of the nonprofit Market Central, a group established to promote the City Market’s role in the community.

“Hearing the designers give the highlights of their proposals will help with analysis,” Gorham added.