Friendship Court architect: Urban density increases vibrancy, but must be made equitable 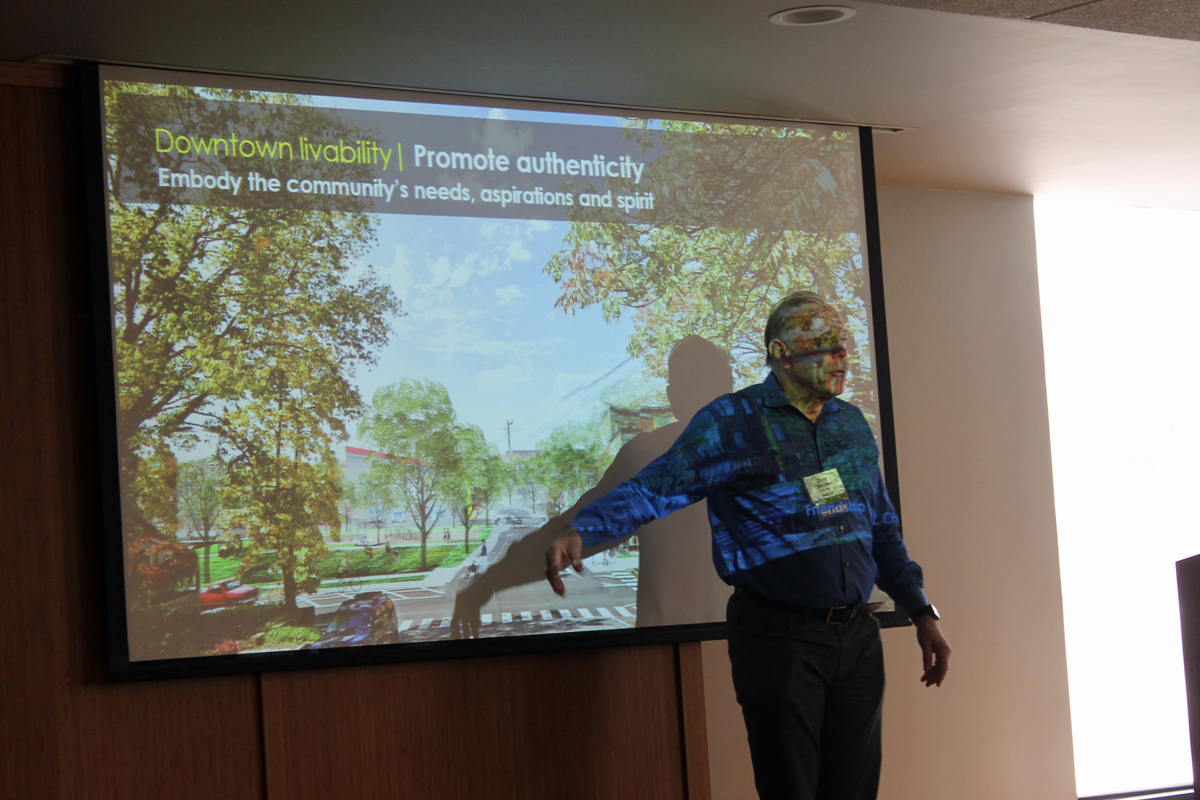 Architect David Dixon of Stantec points out features of his design for the redevelopment of Friendship Court.

The architect responsible for the master plan for the redevelopment of Friendship Court told the Charlottesville chapter of the Urban Land Institute on Thursday that the time is right to invest in dense, walkable downtowns.

David Dixon, an architect with Boston-based Stantec, told ULI at a presentation at CitySpace that people with at least a four-year college education and an income in the top 40 percent nationally are increasingly heading to dense urban environments.

Meeting the housing demand for that shift means trillions of dollars will be invested in downtowns across the country by 2030, and the investment will not fully satisfy demand, he said.

“This country needs to add between 2011 and 2030 nearly 50 million urban housing units, and we cannot provide that many,” he said. “You can imagine what that does to the values.”

Denser urban landscapes, Dixon said, will lower carbon emissions by encouraging the use of public transit, walking and biking instead of individual cars. Two planned projects in Boston and Tampa, Florida, are being designed around autonomous electric public transit in lieu of personal vehicles.

But those benefits could come with soaring housing costs and land values as demand continues to increase and cities reach buildout, which will push poor and working-class families away from city centers, Dixon said.

Mitigating that will require mixed-income and affordable housing close to career-ladder jobs.

The design for the redevelopment of Friendship Court envisions up to 600 mixed-use and mixed-income housing units along with nearly 30,000 square feet of community and commercial space between Garrett Street and Monticello Avenue.

The design also includes extending Fourth Street through the property, a move Dixon said will connect the community to the Downtown Mall and Ix property. The goal is to create a sense of place, somewhere shoppers and residents want to spend time, he said.

“If we can create enough ‘there’ there, we can bring the streets to life,” he said. “Not that they are not alive now, but we are competing with places that are bringing their streets to life in ways that are more innovative, more cool.”

Increasing the density of the redevelopment will allow the Piedmont Housing Alliance, the nonprofit slated to purchase and redevelop the property, to add more affordable units, said PHA Chief Operating Officer Karen Reifenberger.

The PHA has committed to one-to-one replacement of the existing 150 units funded by Section 8 vouchers from the U.S. Department of Housing and Urban Development and hopes to build an additional 80 affordable and workforce units, Reifenberger said.

“That density will allow us to do that,” she said. “One of the other things that we are excited about is bringing Fourth Street through and preserving the green spaces.”

Brandon Collins, an organizer with the Public Housing Association of Residents, said he is not convinced that building tall, dense structures and extending Fourth Street will unify the community.

“The design is monstrous,” he said. “Dividing the community into corridors and running a road through the community without any real resident input or buy in … is a bad process.”

The PHA convened a 13-member advisory panel to guide the project, which includes seven elected residents of Friendship Court. The group is in place to make sure resident voices are heard and have meaningful input, Reifenberger said.

“Their role is to guide both the community life and the physical transition,” she said. “We are definitely relying on the resident experts, both the adults and our youth leadership team, and they are being very candid and forthcoming with their feedback.”

Collins said he would like a stronger commitment to public housing from the community as a whole.

PHA plans to purchase Friendship Court in November 2018 and expects to break ground on the redevelopment in 2019. The organization expects the full redevelopment to take 10 years and cost more than $90 million.