Fuel-switching? What you need to know about electric vehicles 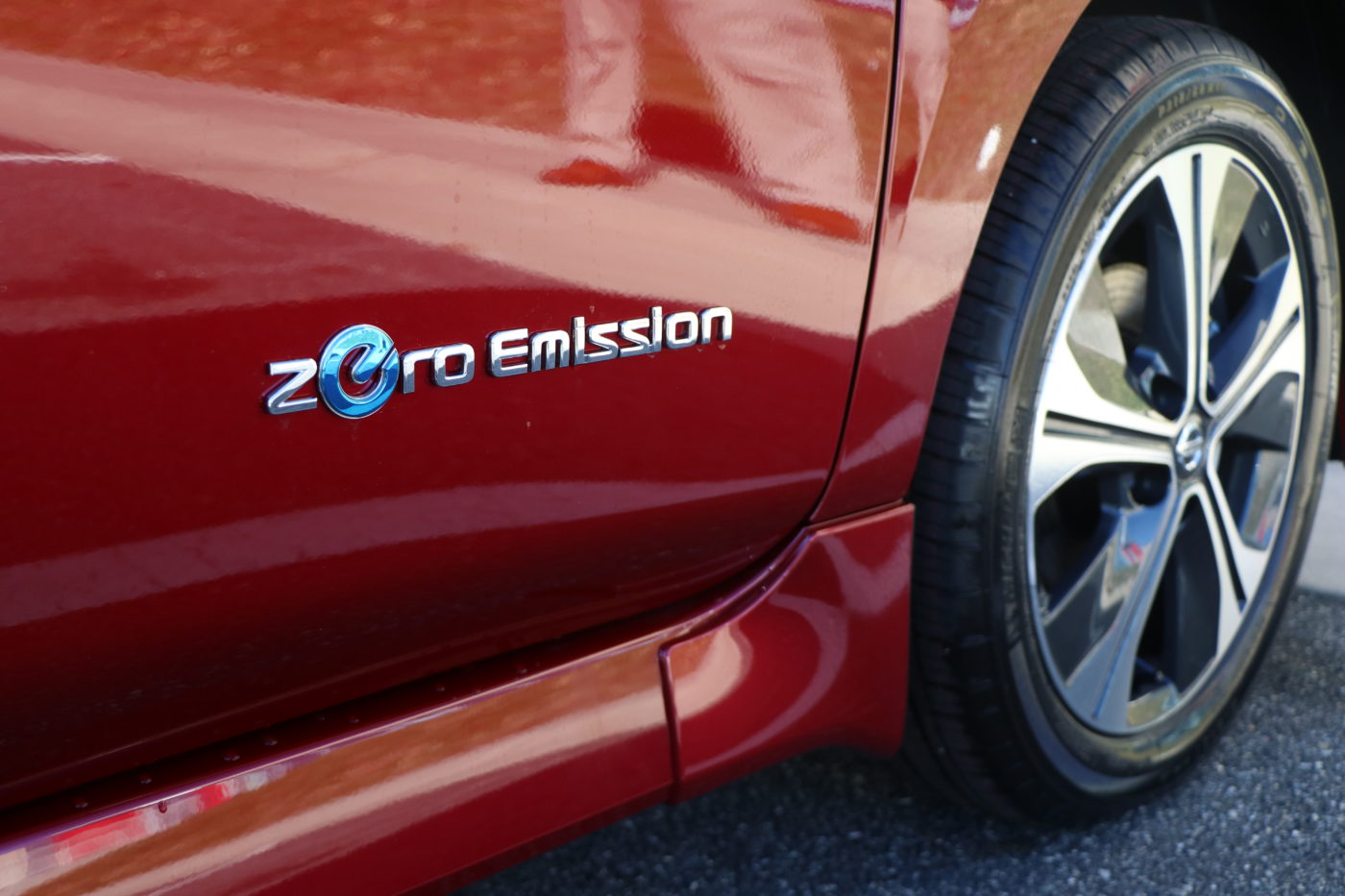 All was silent when I pushed the power button to turn on the Nissan LEAF I was about to drive on an unseasonably warm January day. As I drove around backroads near U.S. 29, the electric vehicle felt like driving any other car — except that I knew I was driving what could become the future of cars.

Transportation plays one of the biggest roles in greenhouse gas emissions, with individual cars often outnumbering buses, bikes or other forms of transportation. While enhanced public transportation, along with urban infrastructure and design that fosters bike/pedestrian mobility, can reduce the need for cars, individuals can reduce their carbon footprint by switching from cars that use fuel to electric vehicles.

In the meantime, the city and county, along with the governor have set emissions goals.

With local and state emissions goals on my mind, and two electric vehicle chargers I walk past every day on my way to work,  I decided to learn about EVs. So, I spoke with some EV owners, an advocacy group, and test drove a Nissan LEAF myself.

Nissan LEAFs are just one of many types of EVs available — anecdotally, I’ve definitely seen quite a few Teslas around town.

“It’s been great.” Voisinet said. “The cars are a bit like iPhones, they have software that’s updated over a network. It’s like a new car every couple of weeks.”

I, too, made a phone comparison as Paul Limbacher, a specialist at CMA Colonial Nissan, pointed out a row of Tesla charging stations in a parking lot during our drive.

“Would a LEAFbe able to plug into those?” I asked.

Limbacher explained the design of the different cars. While many public fast charging stations are suitable for more than one brand of EVs, the Tesla stations in an apartment complex near Stonefield are Tesla-specific.

Having previously assumed EVs needed special charging stations, Limbacher after our drive opened the trunk to show me a charging cable that can be plugged into a wall outlet. Of course wouldn’t charge as fast as a charging station, but would charge nonetheless.

While there are differences among the LEAF, Tesla and other EVs, my biggest takeaway is that they have zero tailpipe emissions, and that, if I owned one, I had another way to reduce my carbon footprint and save money on gas. That said, as more and more people make the switch to EVs, there is still concern over things like charging infrastructure and costs. So I spoke with clean energy nonprofit Generation180 to learn more. 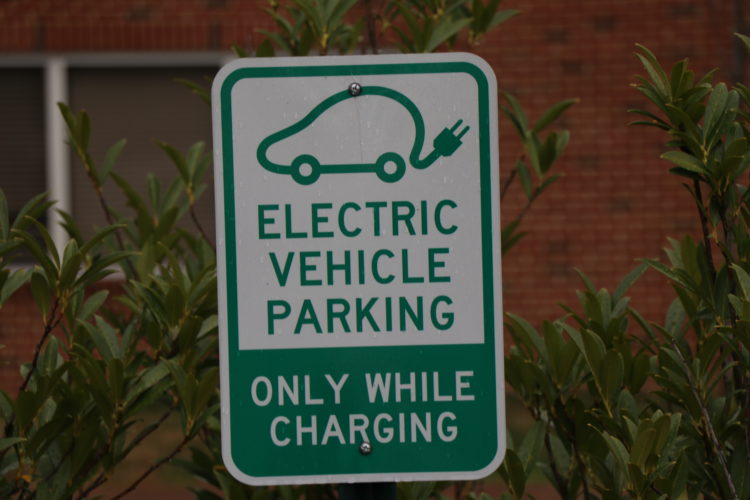 Two electric vehicle charging stations in town are located behind CFA Institute and one of Apex Clean Energy's offices.

Despite concerns, EVs can travel much farther than the average daily driver travels before needing to be recharged. With no oil changes or tune-ups, they’re cheaper in maintenance, too. But the up-front costs can be prohibitive to lower-income individuals who may wish their own car ran gas-free. Generation180’s communications director, Nate McFarland, said that the top three barriers to owning an EV are up-front costs to purchase, charging infrastructure, and range anxiety.

“These are perceived barriers, but some are more real than others. Most people don’t realize that 80% of charging happens at home right now, so we’re talking about that 20% of the time,” McFarland said. “A lot of folks are picturing themselves filling up at gas stations, and it’s like ‘well, where am I going to fill up?’ and the answer’s at home, kind of like you charge your cell phone up overnight.”

“I think that really points to the range anxiety, what we would call a myth, that people think, ‘Oh well this car is never going to get me to my destination,’” said Blair St. Ledger-Olson, a program manager at Generation180. “But we have a coworker who has a car with a range that is on the lower side that he uses for his daily drive every single day and never has any issue.”

While Generation180 has an EV program, as a clean energy nonprofit, they say it’s important to note that EVs still draw power from the energy grid that often still produces power through fossil fuels.

St. Ledger-Olson says it’s an important distinction “until we have a clean energy grid.”

While the grid has a ways to go, especially with local and state emissions goals, EVs produce 70% less emissions than regular cars.

A national organization, Generation180 has Virginian headquarters in Charlottesville and an initial focus on advocacy and educational programming in Roanoke, Charlottesville, Richmond and Fairfax. Through a series of lunch and learns and information sessions, the organization seeks to clear up myths about EV ownership and operations, and it’s also looking to help making the switch more affordable for people.

Tesla models prices can range from about $40,000 to about $80,000, with the ability to go between 250 and 370 miles before needing a recharge. Nissan Leafs can start at nearly $30,000 and go between 150 and about 220 miles. Other car companies manufacture EVs as well as hybrid-electric cars.

Generation180 is working with dealerships to help reduce some of the up-front costs of purchasing electric vehicles through its Electrify Your Ride program.

Charlottesville Climate Collaborative has an arrangement with Colonial Nissan, where local influencers can test drive and discuss their experience on its blog — as Charlottesville School Board member Juandiego Wade did recently.

Generation 180 also has worked with CMA’s Colonial Chevrolet in Chester and Passport Nissan of Alexandria, as well as two dealerships in Maryland — Passport BMW in Suitland and Passport Toyota in Camp Springs.

While many EVs may not necessarily need to be charged often, there still are needs for fast charging stations. California-based company EVGo recently unveiled some stations in the Barracks Road Shopping Center. Concerning more long-distance travel, the future of Virginia’s interstates could include a public and private partnership for fast charging stations at rest areas and gas stations.

The notion is something EV owner and University of Virginia professor Jeffrey Boichuk shared with me. He takes many measures to reduce his carbon footprint — a vegetarian diet, walking and taking public transportation often, living in a tiny house — and he has been the owner of an EV since 2018, when he purchased a Tesla.

While he thinks a build out of fast charging stations would be “amazing” to help enhance ranges of EVs even more, but he also noted that he currently has not experienced trip planning anxiety while road-tripping in his car.

“I don’t plan my trip. I just sit in the driver’s seat and put in the navigation,” Boichuk said. “It routes the trip for me and tells me where to stop and charge time. The algorithm knows what state of charge you will be at.”