How might Charlottesville be governed differently in the future? 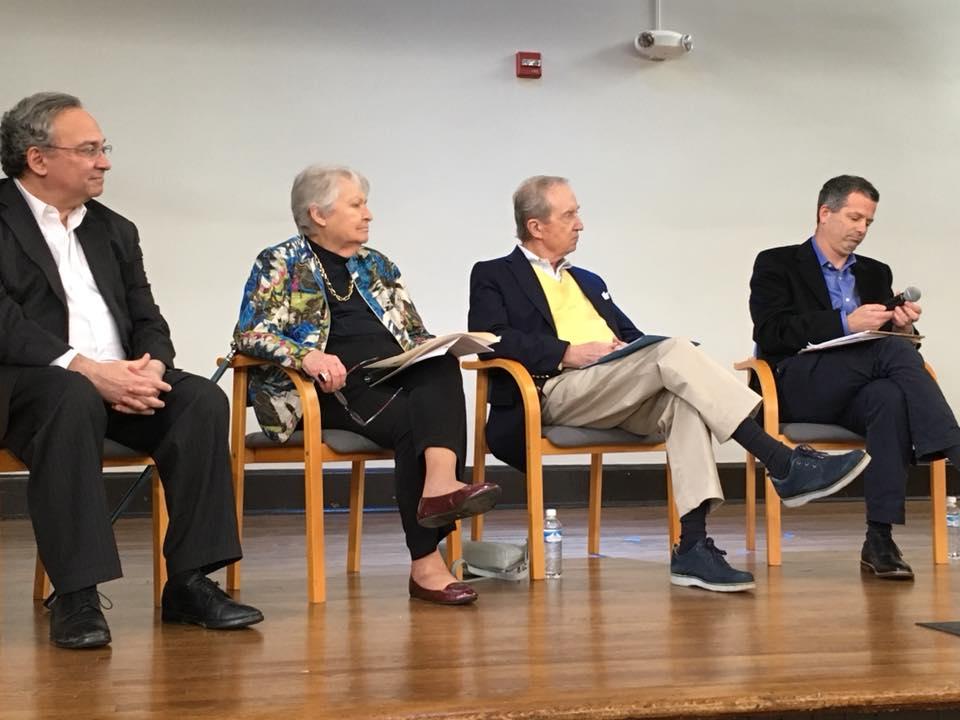 Credit: League of Women Voters of the Charlottesville Area

http://s3.amazonaws.com/cville/cm/mutlimedia/200412xx-CharlottesvilleElectionsStudyTaskForce.pdf How does government currently work in Charlottesville?Walker selected as Charlottesville’s next Mayor after public discussionFirst Independent since 1948 wins election to Charlottesville City Council

Like many other small cities in America, the city of Charlottesville faces an enormous number of issues. But do citizens have the most appropriate form of government to address them?

“Local government is largely housekeeping,” said Joan MacCallum, the first woman to be elected to the Lynchburg City Council in 1978. “Taking care of the roads, the water, the sewers, the way the place looks, the subdivisions. I’ve been quoted more than once by our local reporters as saying that potholes don’t have parties.”

MacCallum was one of four panelists at a forum on reforming the structure of local government held Sunday at the Jefferson School African-American Heritage. The event was also sponsored by Charlottesville Tomorrow and the League of Women Voters of the Charlottesville Area.

“We were asked in the aftermath of the events in Charlottesville on August 12 if perhaps the citizens in and around Charlottesville needed to be reminded or even learn what type of government the city has,” said Kerin Yates, the League’s president.

“We’re here today to learn the options if citizens decide that perhaps they’d like some changes to be made,” she added.

Changes have been considered in the past. In 2004, Council appointed a Charlottesville Elections Study Task Force that produced a 26-page report that thoroughly examined many of the structural reforms that were discussed at the forum. The only change that occurred was moving municipal elections from May to November.

“If we think that something is broke, we need to very clearly articulate what it is that is broken,” said George Gilliam, who served on the Charlottesville City Council from 1972 to 1976.

Regardless of whatever changes the public may seek, cities in Virginia are not able to make decisions about government structure for themselves.

“Anything we want to do would have to be approved and worked through the General Assembly,” Gilliam said.

In Virginia, local governments are subordinate extensions of the state.

“This is important because we often think that cities or local governments can do more than they actually can,” said Rich Schragger, a professor at the University of Virginia School of Law. “What they can do is what they’re authorized to do.”

Virginia is a “Dillon Rule” state which means localities must get permission from the General Assembly to pass ordinances. For instance, the City Council cannot legally remove Confederate statues from city parks because of a state law that classifies them as protected war memorials. That issue is currently in Charlottesville Circuit Court.

To change the form of government, the city’s charter must be amended and approved by the General Assembly.

Gilliam said that might be difficult given the city’s reputation as “the People’s Republic of Charlottesville” and now the “Capital of the Resistance.”

Gilliam said there are several options to changing the current government structure.

“First would be to directly elect the mayor instead of having the mayor elected by the council,” Gilliam said.

In most Virginia cities, the day-to-day operations of city government are carried out by a city manager.

“The council-manager form of government is the most popular form of government for small and medium sized cities in the country,” Schragger said. “It comes out of the Progressive-era idea in the early 20th century that local government needed to be placed on a business footing.”

Schragger said the manager can be likened to a chief executive office and the council to a part-time board of directors.  The mayor is chosen from that board of directors and largely only has ceremonial power.

“One of the weaknesses of the council-manager structure is that there’s not one individual who is actually responsible or accountable,” Schragger said “It’s a number of folks. That makes it sometimes hard for the city to have someone who can speak directly on its behalf and assert a policy.”

One panelist from Virginia’s capital city suggested Charlottesville residents could look there for lessons and examples.

“Richmond is a pretty good laboratory for you if you’re looking at changing governments and what to do and what not to do,” said Bill Pantele, who served on the Richmond City Council from 2001 to 2009. During that time, Richmond went from a council-manager form of government to one with a directly elected mayor.

Pantele said there are many misconceptions about the strong-mayor form of government.

“What a strong-mayor means is that the mayor has appointive authority to all departments,” Pantele said. “It is the mayor who essentially has hire-fire power.”

Richmond elected mayors by popular vote up until 1948 when the city made the switch to a council-manager form of government. During Pantele’s tenure, citizens decided to move back to electing an executive mayor. In 2005, former Governor Doug Wilder became the first elected mayor of the 21st century.

“The citizens were a little bit disenfranchised that the head of the government wasn’t someone they had the opportunity to vote for at the ballot box,” Pantele said. “That referendum passed. It went to the General Assembly which promptly scuttled it.”

Pantele said a deal was arranged where the winning candidate for mayor must win a majority in five of Richmond’s nine electoral districts. Wilder won all nine in the 2005 election. The position of city manager was retitled as chief administrative officer.

Pantele said Wilder asked his chief administrative officer to fire most of the department heads.

“That caused all the institutional knowledge of the government to leave,” Pantele said. Additionally, the mayor declared that all the Council employees and staff members had to resign. That led to a lawsuit which Wilder lost. He also tried to remove the city’s school board from city hall, which led to another lawsuit.

“Under the Virginia code, the governing body of a locality is its City Council,” Pantele said. “There are a lot of questions about who really has power to do what and it’s not well-defined by state code.”

Roanoke voters also directly elect a mayor, but that person is a member of Council and presides over that body.

MacCallum said a strong-mayor might be useful in large cities that need a leader with enough clout to influence and persuade state and federal governments.

“Cities like Lynchburg are likely not going to have that clout,” MacCallum said.

Lynchburg also has a council-manager form of government but there are seven members. Four are elected by wards and three are at-large.

Charlottesville’s five City Councilors are all elected at-large, meaning they do not represent a specific area within the city.

“The advantage of a ward system is that you have more attention paid to that political district,” Pantele said. “You’ve got a representative that is almost always accessible to you.”

Pantele said the downside of electing all Councilors through a ward system is that factions can more easily develop as elected officials promote the interests of their constituents rather than looking at the broader picture.

“Until 1976, all seven members were elected at-large,” said MacCallum, “In that year, Lynchburg doubled its area by adding portions of Campbell and Bedford Counties. Both of these areas were overwhelmingly white, and it was recognized that this action diluted the black vote in Lynchburg.”

Lynchburg switched to a ward system to ensure there would be at least one African-American on Council.

“We recognize that we do have a large black population, and it was necessary for them to be recognized,” MacCallum said.

In 1980, Council appointed a Committee to Study Council Change, which recommended a shift to this form of an expanded Council. Voters approved a referendum on the change in November 1981, but a majority of Councilors opted to hold a second ballot. Voters in May 1982 rejected the idea.

Gilliam said the city could also revisit an idea that was studied in the late 1990’s but was ultimately rejected.

“We could have the city revert to become a town in Albemarle County. That option is only open a little while longer. The window to that closes when we get to a population of 50,000.”

For decades, Charlottesville expanded its boundaries and tax base by annexing land from the county. Albemarle protested the expansion and eventually convinced the city to stop by agreeing to a revenue-sharing agreement that exists to this day.

The General Assembly placed a moratorium on the practice in 1987. Two years later, legislators approved the reversion process as an option for cities that were struggling to pay for services. Towns become part of the county they are in while retaining a reduced municipal structure. Counties would assume the cost of providing public education.

In 1996, a study by the Educational Consulting Service concluded a combined school system would save between $6 million and $7 million a year.

The two jurisdictions remain independent of each other, a unique feature of Virginia’s government.

Schragger said he does not know the rationale for why cities and counties are independent from each other in Virginia. He said there are some examples in the country of metropolitan governments that share services and a tax base.

“There are still tensions and often resistance, and the resistance again is based on the city-suburb dynamic,” Schragger said.

Albemarle and Charlottesville are part of several regional bodies that provide government service, including the Rivanna Water and Sewer Authority, the Jefferson-Madison Regional Library and the Albemarle-Charlottesville Regional Jail.

The Weldon Cooper Center for Public Service has estimated that the city’s 2017 population is 49,132 and Albemarle County’s estimate is 107,697. Demographers project the population of Albemarle will continue to expand at a faster rate than the city.

In the question and answer period, one person asked why the city and the county haven’t merged into one government.

Will the General Assembly remain an obstacle?

Another person asked how relations between cities and counties would change if the political make-up of the General Assembly were to shift from Republicans to Democrats after the 2019 election.

“You might get some more leeway for local governments,” Schragger said. “My dream is to have home rule in Virginia. It won’t solve all of our problems, but I would really like to see it.”

“Politics moves in great pendulum swings, and I really do believe that we are in one of those swings right now,” Pantele said. “A lot depends on how active folks are in voting.”

00:01:00 – Introduction from Kerin Yates of the League of Women Voters

00:03:00 – Opening remarks from Andrea Douglas of the African-American Heritage Center

01:01:00 – Question #4: How would relations between the localities and the General Assembly change if Democrats gained control?

01:06:45 – Question #5: Why do localities have to compete for funding for water and sewer projects?

01:16:00 – Question #7: What changes can be made internally to help government become more efficient?

01:46:45 – Question #11: Are there rules or mechanisms that would make transparency and accountability more measurable?

02:08:45 – Question #17: Is it unusual for a city the size of Charlottesville to have policy research positions?