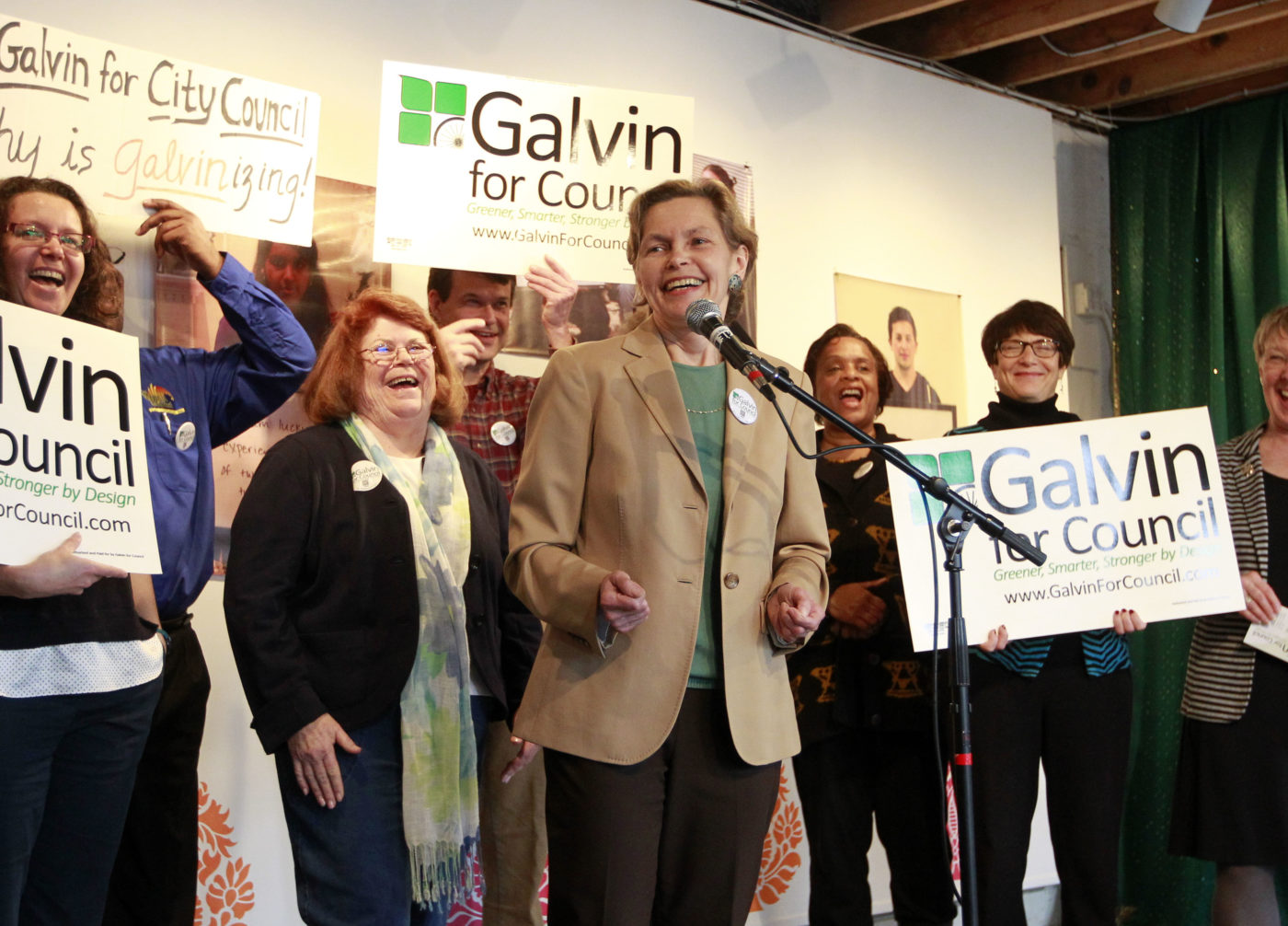 Incumbent Kathy Galvin is the latest Charlottesville Democrat to announce a run for one of the party’s three nominations for the City Council.

“I have pushed to make our streets safer and get our sidewalks protected, comfortable and connected,” Galvin said. “But we’re not there yet.”

Galvin joins Wes Bellamy, Lena Seville, Michael Signer and fellow incumbent Dede Smith as candidates who have made declarations. The top three vote-getters in the June 9 Democratic primary will be on the general election ballot this November.

No Republican or independent candidates have filed paperwork with the city registrar.

Galvin, 58, made her announcement at the Bridge PAI on Avon Street, where she was surrounded by several members of the School Board.

“Kathy wants better for the [over] 4,000 children that are currently in our school division and for all of those that are yet to come,” said Leah Puryear, who served with Galvin on the School Board.

Galvin was elected to that body in 2007 and she said the experience taught her how to build coalitions and work as part of an elected group. She was elected to her the council in 2011.

“Mayor Satyendra Huja taught me basic mathematics my first year on Council,” Galvin said referring to the five-member body. “You have to count to three.”

Huja announced earlier this year he will not seek a third term.

Galvin grew up in Brockton, Massachusetts, and said she inherited a passion for community service from her parents. She said many of the factories there closed, leading to urban decay and then urban renewal.

“I was primed from an early age to think about the kind of places we need to raise children in so they can flourish,” Galvin said.

Galvin, an architect by trade, has called Charlottesville home for 32 years and both of her sons went through the city’s school system.

Former City Councilor Meredith Richards was one of three people to introduce Galvin on Wednesday. Richards said that when she was first elected in 1996, Charlottesville was going through a transition as people moved to the suburbs.

“Everything pointed to a city that had ceased to thrive, and it was up to us to either reverse the trend or turn everything to the county,” Richards said, referring to the issue of reversion to a town which discussed and then tabled in the late 1990’s.

Richards said her time on the council involved setting up policies that would reverse the decline and that Galvin is carrying on that legacy.

“People have rediscovered urbanism and the world seems to have discovered Charlottesville,” Richards said. “It’s this very success that must be managed carefully and harnessed to preserve the things we love about the city.”

Galvin already has picked up the support of one Charlottesville man.

“I did not vote for Kathy Galvin in 2011 but I will vote for Kathy in 2015,” said Bill Emory, a Woolen Mills resident active in community design issues. He noted that her first campaign slogan was “Greener, Smarter, Stronger By Design.”

“Her four years of service as a Charlottesville City Councilor have given meaning to those words and have secured my vote,” Emory said.

Emory said he doesn’t agree with all of Galvin’s positions, but he said he admires her work ethic.

Galvin said Charlottesville faces two key challenges which she would address in a second term.

“How we manage growth?” Galvin asked. “And how do we spread the prosperity that well-managed growth brings?”

Galvin said there is still work to be done to give people more transportation options, including making Charlottesville friendlier to pedestrians.

“We are growing new industries in biotechnology and information technology, and the new talent that attracts wants cities that are walkable, bikeable and accessible by bus,” Galvin said.

Galvin said she wants the council to review all of the recommendations made as part of the Blue Ribbon Commission on Sustainable Education Funding and not just the meals tax increase that is proposed as part of the city’s fiscal year 2016 budget.