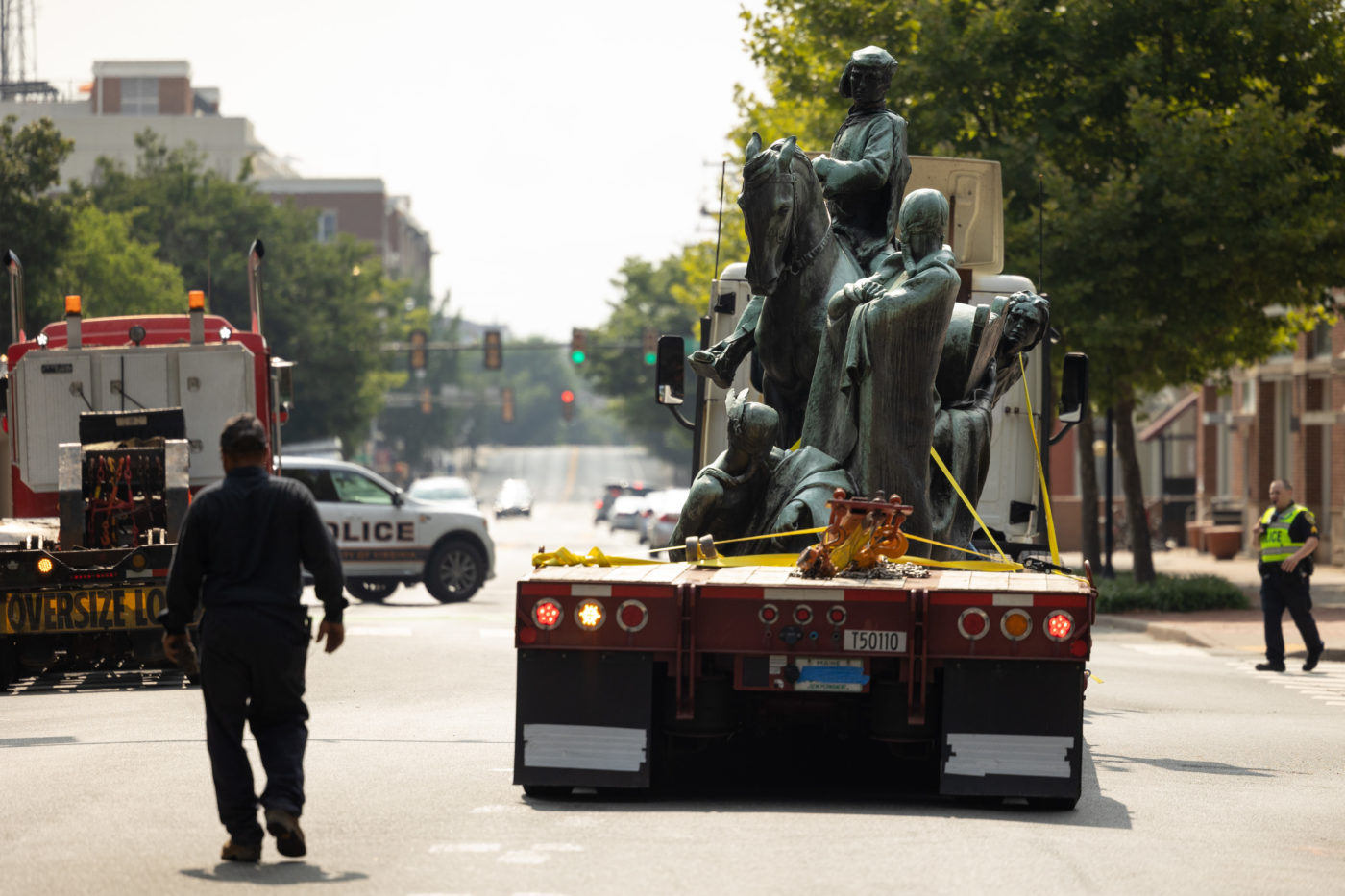 Sunday morning, when the day was still new, a crew removed the bronze statue of George Rogers Clark from its pink granite plinth on West Main Street, on University of Virginia Grounds near the Corner.

It was the fourth monument to white supremacy to come down in Charlottesville over the weekend.

The other three — Meriwether Lewis and William Clark standing tall over their Lemhi Shoshone guide Sacajawea on West Main Street; Confederate Gen. Robert E. Lee and his horse, Traveller, in Market Street Park; and Confederate Gen. Thomas J. “Stonewall” Jackson and his horse, Little Sorrell, in Court Square Park — came down on Saturday. All four were funded around a century ago by wealthy Charlottesville native Paul Goodloe McIntire.

Crews began at 7:30 sharp, setting up the crane and the equipment required to remove this statue, whose eight human figures and one horse, as well as its staggered base, made it a more complex job.

As the morning progressed and the sun rose higher in the sky, more people gathered to watch. But members of the Monacan Indian Nation, including a few tribal elders, as well as other members of North American Indigenous communities, were there to bear witness from the start.

The crews honored their presence by offering them a close look at the statue once it had been lifted from its plinth and onto a flatbed truck.

Just under three hours after the crane arrived, around 10:30 a.m, the statue rolled away to a round of cheers and applause down West Main Street.

The task force and the statue removal committee are “part of a larger conversation about race, equity and injustice” that’s been taking place at UVA, in Charlottesville and all around the United States in the past few years due to increasing attention on violence committed by white supremacists, as well as violence committed by police against Black, Indigenous and other people of color (particularly the murder of George Floyd), said removal committee co-Chair Allison Bigelow, an associate professor of Spanish at UVA who studies colonial science and technology, particularly vernacular sciences like mining and agriculture.

And while the conversation around the George Rogers Clark statue seemed to heat up in summer 2020 — all committee members agreed that it should be removed as soon as possible to prevent it from causing further harm — some community members have advocated for its removal for quite some time.

“It has been at least 20 years of activism led by students and community members, and we’re just sort of coming in at the very end,” Bigelow said of the task force report’s recommendation and the formation of the statue removal committee.

Karenne Wood, a linguistic anthropologist and poet who earned a doctorate from UVA while leading the Virginia Indian Programs at Virginia Humanities, was one of those folks. Wood, an enrolled member of the Monacan Indian Nation who spent years working on compiling the documentation necessary for her tribe to petition for federal recognition (which they received in 2018), also spent years asking UVA to recognize that the university is built on unceded Monacan land and that members of the tribe are active members of both the university and greater Charlottesville community. Wood, who died two years ago this month, also advocated for many years for the removal of this statue and the one of Lewis, William Clark (George Rogers Clark’s brother) and Sacajawea. 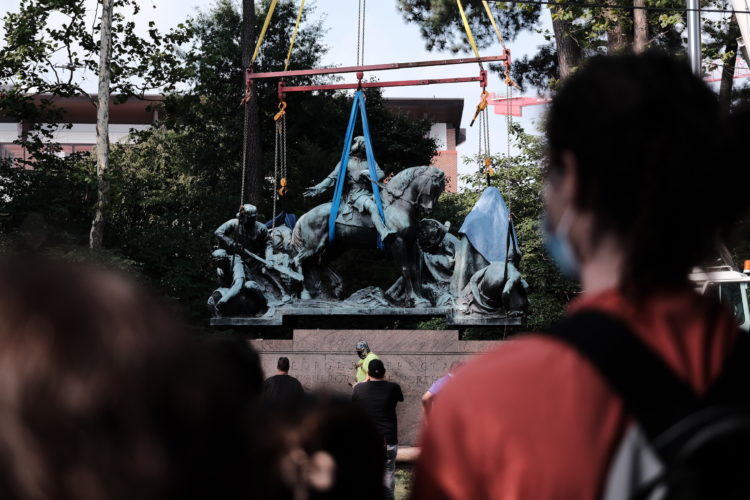 After two hours of work, a crane lifts the enormous bronze statue from its pink granite plinth. UVA will work on removing the plinth over the next few days.

The statue, which was unveiled in November 1921, depicts what appears to be the moment before a murder. Clark, who was born in Albemarle County, is dubbed the “Conqueror of the Northwest” on the plinth, rides high atop his horse, a couple of his men behind him, charging into a group of Native American people — including a woman with a baby wrapped in a cradleboard.

Clark fought against the British and both with and against Indigenous nations, whose loyalties to the British, the Americans, the French or other Native American nations, varied by tribe, Bigelow said. Clark constantly turned his back on — and murdered — people who thought him to be an ally, she added.

“He eliminated entire communities, because he did not see a path forward to nationhood [that included] Indian nations,” said Bigelow. “What he did would now be called ethnic cleansing.”

In recent years, the statue has been repeatedly splashed with red paint, attempts at reminding the community of the bloodshed Clark committed and inspired across North America.

Now that the statue is gone, the committee will decide what to do with the statue and what will go on the land in its stead. The committee will move forward on a path guided by a “circles of impact” model, which comes from trauma theory and has been adapted for this process by committee member and anthropologist Virginia Busby.

Imagine a pinpoint at the center of a circle. Around that first circle is a second, and around the second circle, a third. The pinpoint is the George Rogers Clark statue, and the first circle is composed of current and former Native American UVA students (and faculty and staff) who’ve had to walk past it in their time on Grounds. In the second circle are the 11 Virginia Indigenous nations. And in the third sphere, all of the tribes and nations that have documented or potential history with George Rogers Clark.

Representatives from the first circle, including members of the Native American Student Union at UVA, as well as representatives from Virginia Indigenous nations, sit on the committee. At the moment, the committee is not quite sure what role members of other Indigenous tribes and nations in the U.S. and Canada will have, but at the very least, they have been invited to formally consult in the process and will be heard, Bigelow said.

It’s taken work to identify people in that third circle. “The statue, in its incredibly violent, racist depiction of conquest, does not include any markers of tribal identity” of the Native Americans in the scene, Bigelow said. On the recommendations of more than two dozen scholars of early North America, as well as tribal preservation officers, she read a variety of books, articles and maps in order to identify the tribes and nations that Clark affected, or may have affected.

Bigelow shared the spreadsheet of her findings with Charlottesville Tomorrow, and in addition to the 11 tribes in present-day Virginia (seven of which are federally recognized), she identified 58 other potential non-Virginia tribes. Ryan met with the Virginia tribal chiefs, who also received a letter inviting their participation in this process; Ryan also sent letters to the 56 non-Virginia tribes whose contact information Bigelow could track down.

They’re hearing from tribes right now, said Bigelow, and some have accepted the invitation while others have shared their thanks but have declined for a variety of reasons, from having more pressing issues (like COVID-19, finding money for underfunded tribal programs, etc.) to address within their own tribes. 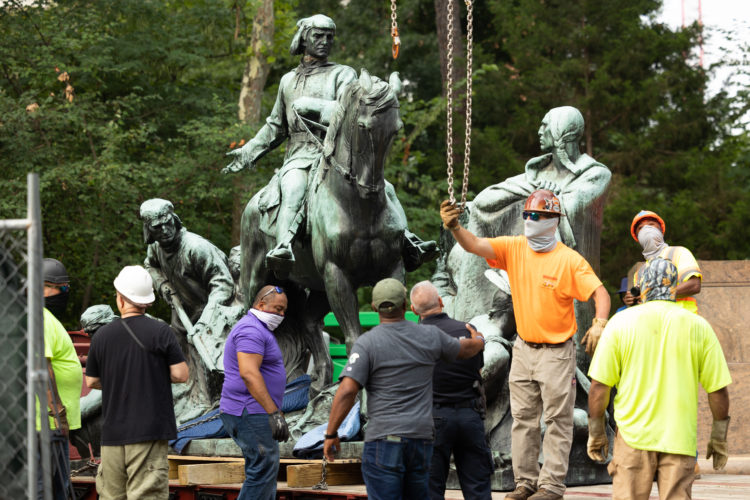 Crews secure the statue to the bed of a flatbed truck.

Lopez, a co-founder of the Native American and Indigenous Studies (NAIS) at UVA, is part of the committee working on developing the tribal consultation policy, which he hopes UVA will adopt, and permanently.

Lopez described seeing photos of the statue come down as “bittersweet.” He’s glad it’s gone, but he also laments the $400,000 bill could have been used to fund NAIS programs on Grounds. What’s more, Lopez said, the George Rogers Clark statue was the only public, large-scale depiction of Native Americans at UVA, and even though it’s a terrible scene, he hopes out of sight does not mean out of mind.

“I hope people won’t think that by removing the statue, that that’s the end,” said Lopez. “It’s the end of a violent era, of violent actions directed at native nations … but now, we have to build a good relationship, something completely different.”

Now that all four statues are out of public view, Bigelow hopes the community will use the mental space it has used to look at, think about and talk about the statues to instead begin looking at what reparations will look like for Native American and African American communities in the area. After all, she said, UVA stands upon unceded Monacan land, and was built by the hard labor of enslaved African Americans.

Barbara Brown Wilson, director of UVA’s Equity Center and a professor of urban planning in the school of architecture, is Bigelow’s co-chair. Wilson said that by the fall, the committee will be working in consultation with affected tribes to discuss what to permanently do with the statue and the site. She also hopes that an Indigenous person can take over her leadership role on the committee.

“Removing the statue is good,” Bigelow said, but it’s not even close to the end of this process. “There is a lot more work to be done, like improving admissions for Native American students, advocating for tuition waivers for Virginia Indian citizens. The whole university exists on their land. And we as a university community need to think seriously about [this].”

Lopez agrees. In addition to the aforementioned resources, he also wants UVA to seek a formal relationship with the Monacan Indian Nation so that the university can go beyond acknowledging that it is build on unceded Monacan land and actually, meaningfully share that land — including land at Morven Farm, the site of several Monacan ancestral village sites — with its traditional custodians.

“It’s really hard to understand why they’ve excluded Native Americans in their [200-year] history,” and in their programming, Lopez said of UVA. He doesn’t know exactly why, but he understands it as being “about greed, selfishness and greed on the part of faculty and administrators who could’ve otherwise made a difference. But they chose what was more in their own self-interest.” He struggles to understand how UVA puts millions of dollars behind all kinds of institutes, from democracy to data science to African and African American studies, but not Native American and Indigenous studies.

Lopez knows his critique of the university is harsh. But, there are more committees focused on Native American and Indigenous peoples at UVA now than there ever have been, and they’re all really active, he said. And, Lopez noted, a lot of new people have come to the university since he experienced UVA as a Native American student years ago, and some of them are willing allies for the cause. “There is a lot of hope,” said Lopez. “We’re hopeful. I am. We’re getting somewhere.”