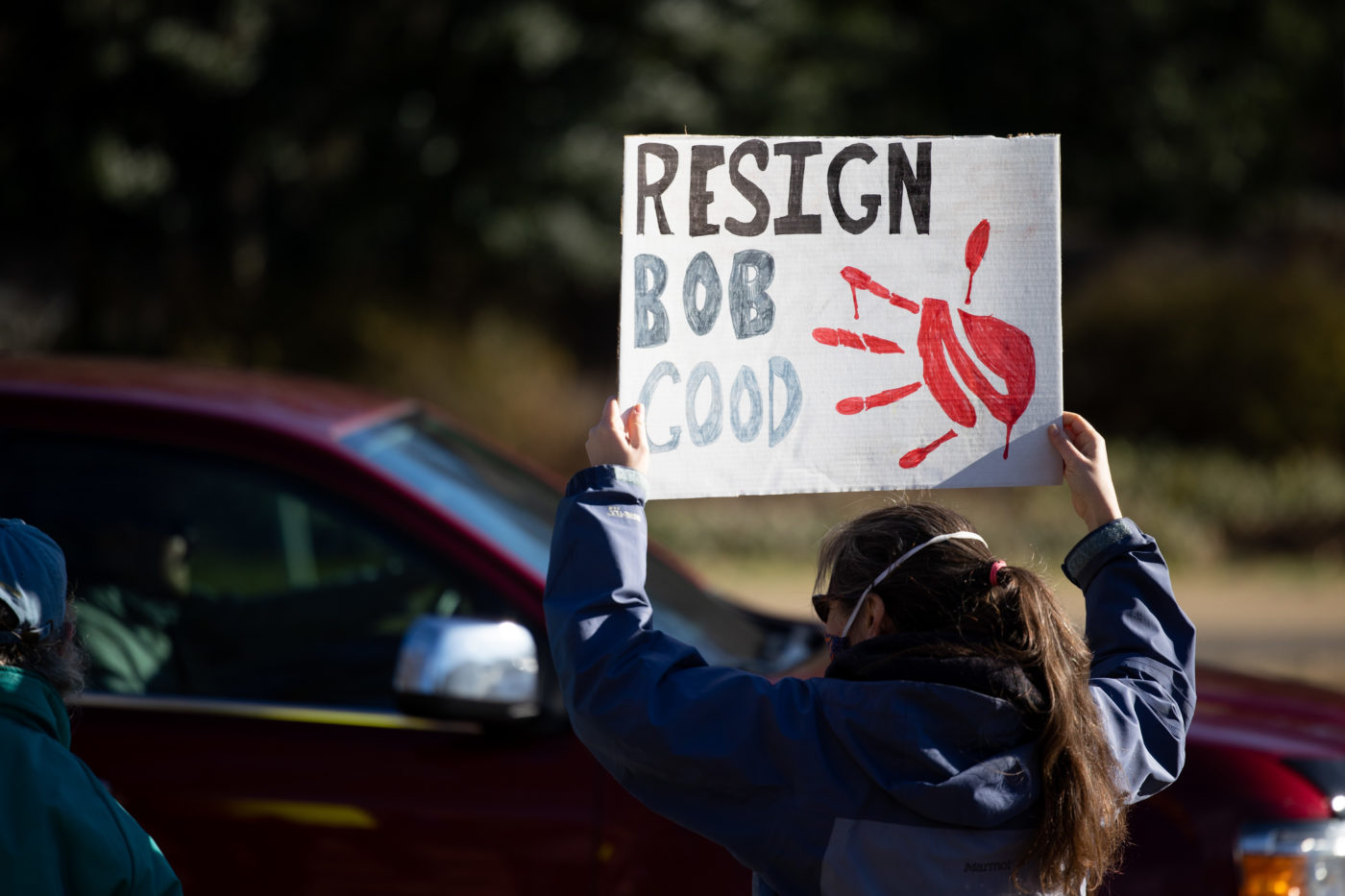 A protester holds a sign during the Jan. 9 No Haven for Fascists demonstration outside of the Albemarle County Office Building in Charlottesville.

As new 5th Congressional District Rep. Bob Good, a Republican, prepared to vote last week against certification of the election results of president-elect Joe Biden, a mob stormed the U.S. Capital to disrupt the votes. The right-wing group stemmed from a rally that decried the election results, and among those present were the district’s GOP chairman, Melvin Adams, and his wife Sandy — who is also a member of Good’s staff as his district director.

Following the insurrection that took place on Jan. 6, Adams recounted his experience in an email to the Republican Leadership Committee, according to a copy of the email forwarded to Charlottesville Tomorrow and other outlets.

While Melvin Adams could not be reached by Charlottesville Tomorrow at the time of this publication, he confirmed to The Washington Post the contents of the email — adding that he and his wife stood at the police line but did not enter the building.

In the email, Adams wrote that he and his wife had chosen to “join many thousands of wonderful red-blooded American patriots.”

His email went on to describe the crowd as “joyful, energetic, peaceful, prayerful, hopeful and courteous” throughout the morning before recounting Adam’s viewpoint as the gathering began to turn violent.

He wrote that by early afternoon the crowd “began to move towards the [C]apitol building.” Prior to the gathering — and later infiltration of the building — President Donald Trump had spoken to the crowd, urging them to march to the building.

While Melvin and Sandy Adams said they had not breached the Capitol, his email describes them at one point being close to a woman who had been shot inside the building and evacuated by emergency medical technicians.

Adams wrote that “… a young lady who had been shot was being taken to the ambulance, passing so close to us that we could have literally reached out and touched her.”

Among the five people confirmed dead from the day’s event, Air Force veteran and rally participant Ashli Babbit has been identified as the person fatally shot inside the building.

While not fully embracing the narrative that antifascist activists had infiltrated the crowd, Adams also did not deny it.

“Some say that Antifa members were embedded in the crowd and were citing the crowd to violence. That could be. I honestly don’t know,” he wrote.

The theory has been stated by some Republicans in the week since, but the Federal Bureau of Investigation claims there is no evidence at this time to support it.

Meanwhile, Good, who has ardently supported President Trump throughout his campaign for the 5th District, called Trump’s impeachment hearings on Jan. 13 was “the culmination of a four-year effort to overturn the will of the people and the results of the 2016 election.”

Following the insurrection on Jan. 6, Good tweeted that he was “proud to fight for the voices of Virginia’s 5th and all Americans who want to ensure the integrity of the election.”

Despite some congress member’s objections and many Trump enthusiasts’ hopes that it be true, reports have found no evidence of voter fraud in the 2020 election.

Charlottesville Tomorrow requested comment from Good but has not received a response.

As chairman of the 5th Congressional District’s Republican Party, Adams was instrumental in the decision to hold a convention last June rather than a primary election when Good challenged incumbent Republican Rep. Denver Riggleman. The drive-through convention for the district, which is about the size of New Jersey, was held in Good’s home locality, Campbell County.

Local organizer David Singerman, of Indivisible Charlottesville, said he is not surprised that acquaintances and staff of Rep. Good were present outside the capital last week.

“It’s further evidence of Good’s participation in and endorsement of the insurrectionist conspiracy,” Singerman explained. “He supported the goals of this mob. He voted to overturn the election results after the mob had done its damage to the capital and threatened his colleagues in congress.”

Singerman also participated in a Charlottesville rally over the weekend calling for Trump and elected officials, like Good, who voted against the election certification to be held accountable.

Given the fact that Sandy Adams is employed as a district director for the congressman,  Singerman wonders if she was supposed to be working that day, rather than attending the rally-turned-mob.

“Even if she didn’t sack the Capitol itself, she’s still at a rally where people around her are waving Confederate flags and there’s pro-Holocaust T-shirts  and people armed to the teeth,” Singerman said. “Nobody accidentally winds up at a Nazi or fascist rally.”

While she and her husband may not have stormed the building, Singerman notes that in Melvin Adams’ account of the day, they did not immediately leave the event once it took a turn.

“In that long email, they never said, ‘We saw what was going on, this is not our jam and we left,’” Singerman explained.  “They stuck around.”