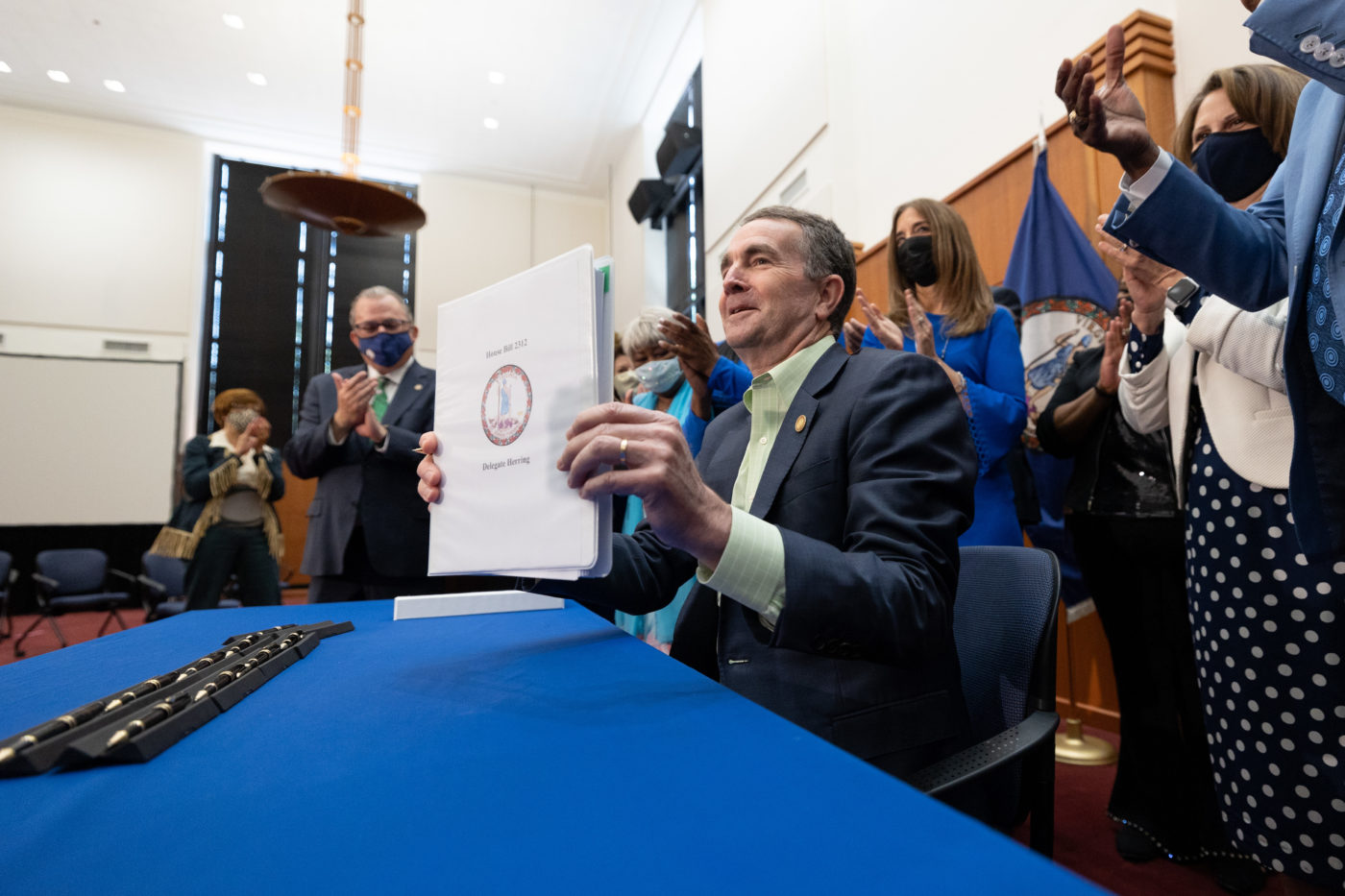 Virginia’s General Assembly turned over a new leaf this year by legalizing possession of marijuana ahead of an eventual legalized marijuana market by 2024 — with Gov. Ralph Northam having signed the passed bills into law on Wednesday. While the new law — set to take effect July 1 — loosens past restrictions of the formerly illegal plant, it creates new restrictions and raises questions as officials continue the work to “get this right.”

What to expect with the new law

“There were a lot of really great things that we advocated for, with the centering for equity, that we’re excited got through,” said Chelsea Higgs Wise, executive director of Marijuana Justice.

The advocacy group was one of several that played a role as legislators crafted and voted on the new laws. Other groups include the Virginia American Civil Liberties Union (ACLU), Justice Forward Virginia, Rise for Youth and the Virginia chapter of the National Organization for Reform of Marijuana Laws (NORML).

“This legislation gets it right because of the immediate repeal of simple possession, which has been the tool for a gateway to imprisonment for many Black Virginians,” Higgs Wise explained.

Ahead of the planned legal market for marijuana by 2024, the governor noted the importance of making simple possession legal now.

“It’s important that we go ahead and legalize simple possession now,” Northam said during the Wednesday signing.  “This is the latest step we are taking towards building a more equitable and just Virginia and reforming our criminal justice system to make it more fair.”

In 2018, Virginia ‘s Board of Pharmacy determined medical marijuana dispensaries around the state, and in legalizing simple possession, it’s the 16th state to do so and the first in the South.

Higgs Wise also commended the greenlighting of processes to seal records of people previously convicted for marijuana and the establishment of the Cannabis Control Authority, which will oversee market rollout.

She especially commends the Cannabis Equity Reinvestment Loan Program and Fund, which will direct tax revenue from cannabis sales into communities that have been disproportionately affected by marijuana prohibition.

At the signing of the legislation, the governor and several legislators who spoke addressed the restorative justice that is intrinsic within House Bill 2312 and Senate Bill 1406.

However, Higgs Wise notes aspects of the new laws that need work, such as its new punishments that she says could lessen or worsen the impact for youth and communities of color  — despite a consensus within the Democrat-controlled legislature to place equity at the forefront of legalizing marijuana.

A report produced last year to Northam and the General Assembly found that from 2010 to 2019, the average arrest rate of Black people for marijuana possession was 3.5 times higher than the arrest rate for white people. The report also noted that Black people were more likely to be convicted.

“We know that traffic stops are the most common reason for anyone to have interactions with law enforcement,” Higgs Wise said, and the sentiment was echoed by Northam.

“An arrest for simple possession can literally follow a person for a very long time,” Northam said. “And, unfortunately, arrests can sometimes escalate into something much more dangerous as we are all much more aware of lately.”

Northam’s signature authorizing the legalization of marijuana happened on the day following the conviction of former Minneapolis officer Derek Chauvin for the murder of George Floyd, several days after the death of Daunte Wright in Minnesota during a traffic stop and after the body camera footage of Army Lt. Caron Nazario’s traffic stop in the town of Windsor in Isle of Wight County. With a spate in the death of or excessive use of force towards Black and brown people by law enforcement — sometimes the result of traffic stops — some Virginian lawmakers argue the legalization of simple possession can have a positive impact.

As legislators crafted and will continue to craft policy, advocacy groups like Marijuana Justice played a role in the development. While some of those groups were present at Wednesday’s event, such as the Virginia chapter of the NORML, Higgs Wise says her organization was not allowed to attend. Representatives from some other grassroots organizations decided to also not attend in solidarity with Higgs Wise’s organization.

The signing was set to take place outside the Governor’s Mansion at 2 p.m., but by a little after 1 p.m., the press was notified that the event was moved inside to the Patrick Henry Building due to the weather. Northam said that the reasoning for not letting some groups in was due to limited capacity to allow for COVID-19 social distancing. Higgs Wise, however, Tweeted that morning that her organization already was not allowed to attend the signing.

Del. Charniele Herring, D-Alexandria — who carried the legislation in the House of Delegates — reiterated gratitude to those involved in the formation and passage of the bills.

She also thanked people who testified on behalf of the bills and shared their experiences throughout the legislative session.

Other speakers at the event reiterated the “road ahead” as the state continues work on the forthcoming legal market and equitable access for participants within it.

“There is still work ahead and much to be done, but by signing this bill into law, we can celebrate a large and clear and historic step forward,” said House Speaker Eileen Filler-Corn, D-Fairfax.

Higgs Wise says her team will continue to push against the need for open container rules within the legislation, citing an example of a person simply smoking a cigarette as potentially being pulled over with likelihood this would happen more often to Black people.

“We removed [marijuana] odor as a reason to search and seize a vehicle, but what this does is continue to give cops a racist reason or tool,” Higgs Wise said. “We understand this open container is just continuing to allow police to target us for driving while Black.”

“I’ve been saying — even from when medical cannabis was established — to store it in your trunk or behind the last row of seats, if people have a hatchback or SUV,” said Jenn Michelle Pedini, Development Director for NORML.

They also noted the potential for confusion because, without a legal market for recreational marijuana use, there is not yet original retail packaging.

For now, the law prohibits using marijuana while driving as well as having it within the passenger area of a car.

According to the legislation, the passenger area “does not include the trunk of any passenger vehicle; the area behind the last upright seat of a passenger van, station wagon, hatchback, sport utility vehicle or any similar vehicle; the living quarters of a motor home; or the passenger area of a motor vehicle designed, maintained, or used primarily for the transportation of persons for compensation, including a bus, taxi, or limousine, while engaged in the transportation of such persons.”

Another area of legislation that Higgs says concerns her is the impact on youth for instances where marijuana may be consumed on school grounds.

The legislation outlines that marijuana use by people under the age of 21 may be subject to penalties for consumption that include a fine of no more than $25 and/or entry to a substance treatment or education program.

As it will not be legal to consume in public, the legislation differentiates between adults and juveniles in public but lacks those definitions when detailing the prohibition of consumption on school grounds.

“Any person convicted of a violation of this section is guilty of a Class 2 misdemeanor,” the bill reads.

“Why are we penalizing youth more because of a legal substance?” Higgs Wise asked.

Additionally, law enforcement will need to incorporate the new law into its enforcement of situations like driving under the influence and partaking in marijuana where not legally allowed.

For enforcing driving under the influence, Tyler Hawn, a spokesperson for the Charlottesville Police Department, says that any stops that may relate to marijuana use in a vehicle would likely be initiated for the same reasons an alcohol-related stop would be, such as erratic driving as a potential signal for not being sober.

The legal road ahead

Meanwhile, Northam noted that the legalization of simple possession is just one of many more forthcoming steps in addressing the disproportionate impact that policing of the substance has had on Virginians of color.

As the state works towards a legal market, it must first reenact components of House Bill 2312 and Senate Bill 1402 in the next session as well as establish its Cannabis Control Authority and related commissions and boards.

Another component of the bill involves resentencing of people serving time for marijuana-related offenses, allowing for a hearing before the court that originally sentenced them. Legal counsel will also be available for those who cannot afford to hire counsel.  However, this portion of the bill is subject to reenactment in the next legislative session.

In the meantime, Northam and legislators anticipate the future market for recreational marijuana use.

“As we build a more equitable Virginia, it’s also important that we consider economic equity,” Northam said. “Legalizing marijuana creates opportunities in the commercial market throughout the commonwealth.”

Northam sited the forthcoming legal market could create more than 11,000 jobs in various sectors like agriculture, construction and professional services.

“There are considerable opportunities for Virginians — especially those from over-policed and economically distressed communities to become business owners in this industry, building generational wealth.”