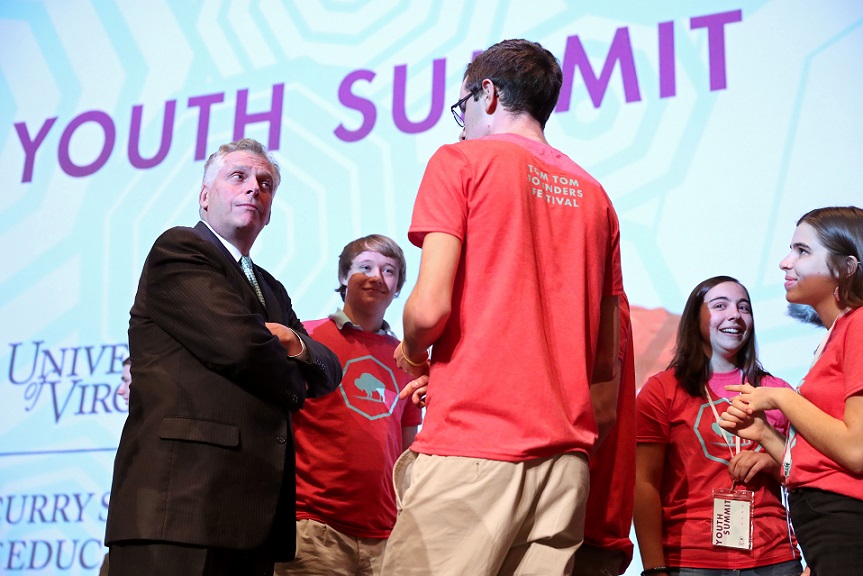 Gov. Terry McAuliffe speaks with students during the youth summit at the Paramount Theater as part of the Tom Tom Founders Festival on Thursday, April 13, 2017.

The Youth Summit brought about 850 students from public and private high schools in Charlottesville and Albemarle County to the Downtown Mall.

Olikara’s Millennial Action Project is a national nonpartisan organization that sponsors “Future Caucuses” of young policymakers in the U.S. Congress and state legislatures.

Olikara said that he was inspired to leave his job at the World Bank to found the Millennial Action Project when he realized that Thomas Jefferson, Martin Luther King Jr. and other prominent Americans left their mark on the nation’s history when they were well under 40 years old.

“They were not white marble statues then,” said Olikara. “They were young, upstart entrepreneurs.”

Olikara said that playing in jazz bands in high school and college helped him develop listening skills and confidence that have served him well as a political entrepreneur.

“Don’t be afraid of playing the ‘wrong note,’” Olikara said. “It could be the best one.”

Olikara urged students to venture outside the ideological echo chambers of their social media feeds.

“The civic and political health of our country is among the worst it has been since its founding,” he said. “The future of our democracy depends on our ability to reach out to people who are different from us.”

Weidman Powers’ Code 2040 is a nonprofit organization dedicated to creating pathways to technology careers for underrepresented minorities. The organization takes its name from the decade when non-whites are expected to make up the majority of the U.S. population.

“We work on ensuring that the tech sector actually looks like America, making sure everyone has the opportunity to get their foot in the door and succeed,” Weidman Powers said.

Weidman Powers encouraged students to be engaged in politics, even if they are still too young to vote.

“It doesn’t mean that there aren’t people who would listen to your ideas and the policies that you want to see,” she said.

“Make sure you are visible and vocal in talking about the things that you care about, because it’s your future.”

Wadzinski shared with the audience a favorite quote by Henry David Thoreau: “How could youths better learn to live than by at once trying the experiment of living?”

“More school hours should be devoted to trying new things and just playing around,” Wadzinski said.

As a high school student, Tameez founded the Houston Independent School District Student Congress, which in 2015 submitted a 35-page brief to the Texas Supreme Court detailing the hardships faced by underfunded schools.

“We should be carrying each other,” Tameez told the audience of students. “If no one else will, we should be taking care of each other and getting ourselves across the finish line.”

The Youth Summit concluded with an address by McAuliffe, who encouraged students to pursue their entrepreneurial dreams and to consider careers in technology industries.

“It’s a new economy that we have today, and it starts with young people,” McAuliffe said. “It starts with entrepreneurs.”

McAuliffe said that Virginia’s schools should do more to prepare students for jobs critical to the modern economy, particularly those related to cybersecurity. He said that a foreign government attempted to obtain data from some of his online accounts last month.

“We can’t find cyber warriors to come work for us,” McAuliffe said. “I want you getting on-the-job experience while you are still in high school.”

Zyahna Bryant, a member of Charlottesville High School’s student steering committee for the Youth Summit, said she appreciated Olikara and Weidman Powers’ candid and detailed accounts of their entrepreneurial journeys.

“Their credentials unfolded really naturally as they spoke,” Bryant said. “I felt like I got to know them well.”

Bryant said she also liked how the Youth Summit brought together students from many schools in the area.

The Youth Summit program included educational workshops, speeches by student-entrepreneurs and an exposition of student projects.

There were also pitch challenges for business and community service ventures by local students. A team of St. Anne’s-Belfield Upper School students won the $500 grand prize in the business pitch competition with their idea for a mobile app to prevent procrastination on homework.