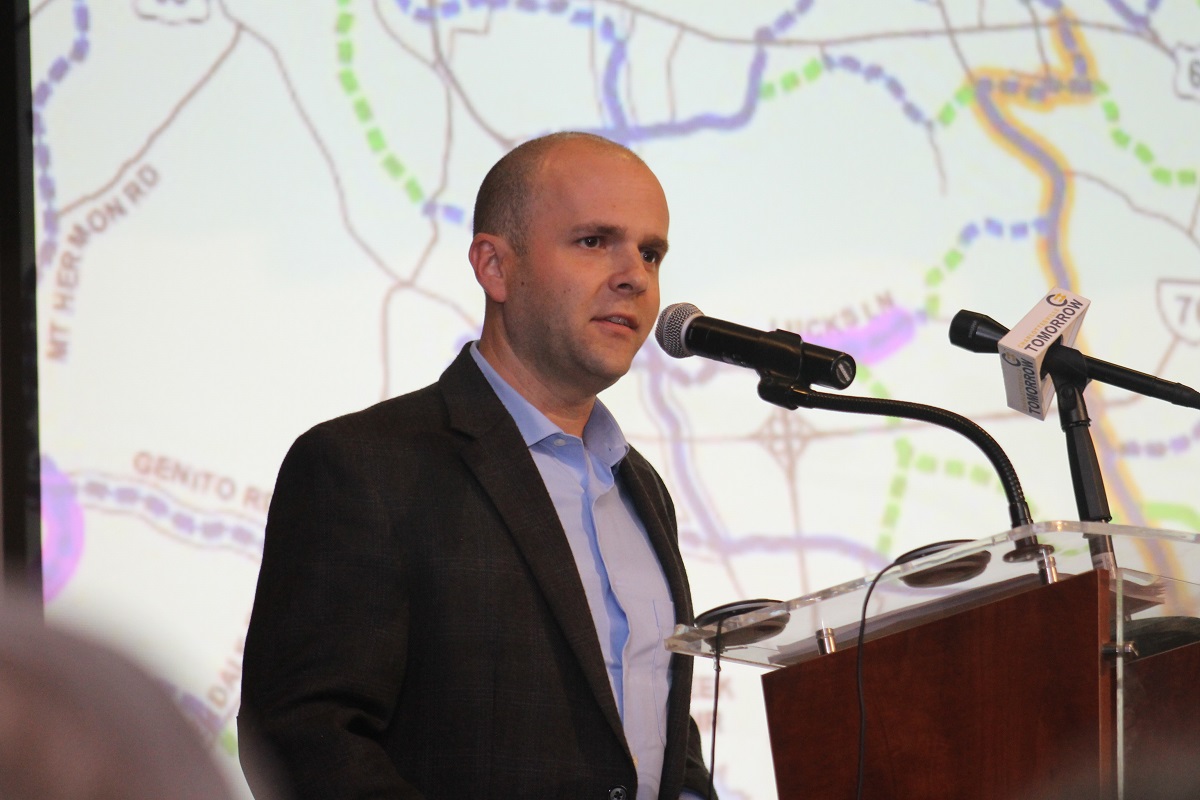 Imagine there was a paved trail for walking and biking between downtown Charlottesville and Monticello, or a trail from Crozet to the University of Virginia.

Would people use them? What benefits might they provide? Who would oppose them? Whose property would they be built on?

Local planners and environmental organizations are initiating a conversation to take years of greenway and trail ideas from plans to reality.

“We have done a lot of planning in this community … and none of them are necessarily bad, but they are not all well integrated, and they don’t identify the low-hanging fruit,” said Rex Linville, of the Piedmont Environmental Council. “They are also not plans that are steeped in community support.”

Using a $180,000 grant from the Charlottesville Area Community Foundation, the PEC and the Thomas Jefferson Planning District Commission are convening community members in an approach they believe will yield results.

At an event Wednesday at the Jefferson School African American Heritage Center, attended by about 125 people, the PEC brought two greenway experts to Charlottesville to share some best practices.

Chuck Flink, president of Durham, North Carolina-based Greenways Inc., has authored a book on the subject and is a leading designer of greenway systems, having worked in more than 250 communities around the country.

“Greenways have greatly added life in the economies of many communities across America, and I submit that they really have become America’s new Main Street,” said Flink. “It’s where we go, when we slow down long enough, that we are not in automobiles and we are actually seeing people, greeting each other and exchanging pleasantries.”

Flink made the case that greenways have numerous benefits, including in the environment, education, mobility, social needs and the economy. He said the locations being discussed for greenway connections in Charlottesville, such as downtown to Monticello, cover distances that are very feasible for these projects.

As an example of good public engagement, Flink described in detail the 25-mile urban Wolf River Greenway, a project he is currently working on in Memphis, Tennessee. The $50 million project is a public-private partnership, with half the funding coming from private sources.

“This has been a project that’s been on the books for over 30 years but they couldn’t really move it off dead center,” Flink said.

When he asked city officials in 2014 about the public engagement process to date, he discovered a major challenge.

Beyond traditional planning charrettes, Flink specifically sought to engage residents in their neighborhoods and at their community events. In his work around the country, he sees similar challenges.

“You are going to face a lot of opposition,” said Flink. “You are going to face people who don’t understand why you are doing this, why they should be involved, why their land has to be committed to this. But at the end of the day, the experience that we have all across America is that these are very, very positive facilities and resources.”

Linville said he thinks a similar approach to community engagement will be important in Charlottesville, as greenways here would cross diverse neighborhoods with different needs, interests and concerns.

“If we are moving forward to implementation of a greenway system, of a bike and pedestrian network, it needs to be something where the people have buy-in and that they have given input so that system is something that’s really going to benefit them and take them from where they are to where they want to go,” said Linville. “Also, if they are not engaged on the front end, they are not going to feel welcome on the back end.”

Max Hepp-Buchanan, director of Bike Walk RVA, a project of nonprofit sports backers, brought a perspective from the Richmond area, where the trail-building expert said he had to transition to “straight-up advocate” for Chesterfield County’s Bikeways and Trails Plan.

Hepp-Buchanan said the project to merge competing plans for bikeways and trails, which was ultimately approved in November 2015, involved significant public engagement and outreach, and, in the process, opened up a hornet’s nest of opposition from other activists.

“It was a hot topic, people got really interested, and so did the opposition,” said Hepp-Buchanan. “Behind the scenes, they were getting organized and they were starting to make the calls and [to send] the emails that gave our elected officials pause.”

Hepp-Buchanan said they learned it matters a lot who is in the room for the planning discussions.

“You need to bring people to the table who aren’t your traditional messengers,” he said. “They need to talk to the elected officials, as well, and you need to paint a bigger picture.”

Bike Walk RVA orchestrated a grassroots campaign to engage residents in lower-income neighborhoods to document their stories of how a greenway could help their mobility so that it wasn’t just the “old white men in Lycra” speaking on behalf of bicyclists at the public hearings.

In Charlottesville, Linville said he thinks the time his team will spend over the next 18 months will identify key greenway priorities for local government to implement with the community’s support.

“Part of what we are trying to achieve is to identify what we have community support for and then to try to prioritize those projects based upon that,” he said. “The ones that have the greatest support are the ones most likely to be successful.”

The Charlottesville Area Community Foundation and the Piedmont Environmental Council will host their next community event on greenways from 6 to 8 p.m. Friday at Live Arts. More information is available at pecva.org/cvillegreenways.