approved preliminary plans for two phases of a mixed-use development near the University of Virginia Medical Center at their meeting on October, 14 2008.  The Grove Square plan includes two four-story mixed-use buildings in the Fifeville neighborhood near the UVA hospital complex.

These are the first site plans submitted which take advantage of the Cherry Avenue mixed use corridor, which was rezoned in 2003 to encourage economic development.

The Commission agreed that they were many positive aspects to this project.  Commissioner Dan Rosensweig specifically pointed to the extensive tree coverage depicted in the plan, and felt this could help encourage the City to meet its goal of achieving a 40% tree canopy. However, several Commissioners hesitated when they discovered that the plans for bike storage in Phase III did not meet their initial expectations.

When Grove Square Properties applied for a special use permit in July of 2008, one of the conditions appended to the permit was provision of a facility to store between 20 and 40 bicycles.  The Commission had assumed that this would be provided in a particular unexcavated area on the ground floor near the parking garage. The project architect from the firm Mitchell Matthews Architects, determined upon further investigation that this location would not be convenient or safe for cyclists and decided to meet the facilities requirement with 470 square feet of racks for 25 bicycles split between several locations on different floors. 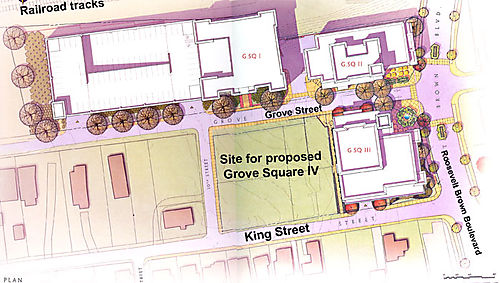 Chairman Jason Pearson pointed out that bicycle facilities on upper floors may be more convenient for recreational cyclists but less so for regular commuters, who would have to carry their bicycle up the elevator each day. Attorney Valerie Long, who represented the applicant, explained the architect’s rationale and entertained several ideas from the Commission about how more bike facilities could be accommodated. She assured that the building manager would allow and encourage transport of bicycles throughout the building. The technical question revolved around whether these accommodations would meet the exact language of the special use permit, since there was some confusion over whether the permit called for one bicycle “facility” or facilities in plural.

Commissioner Pearson summed up the discussion. “Overall the project has been a visionary project for the City. It’s a shame that this piece of it has been deflating.”

The discussion was deferred to the end of the meeting so the architect could be brought in to consider alternative bicycle storage solutions. It was determined that at least 10 more ground floor spaces for bicycles could be added to the plan, and this amendment was included in the motion. The Commissioners approved the site plans unanimously.