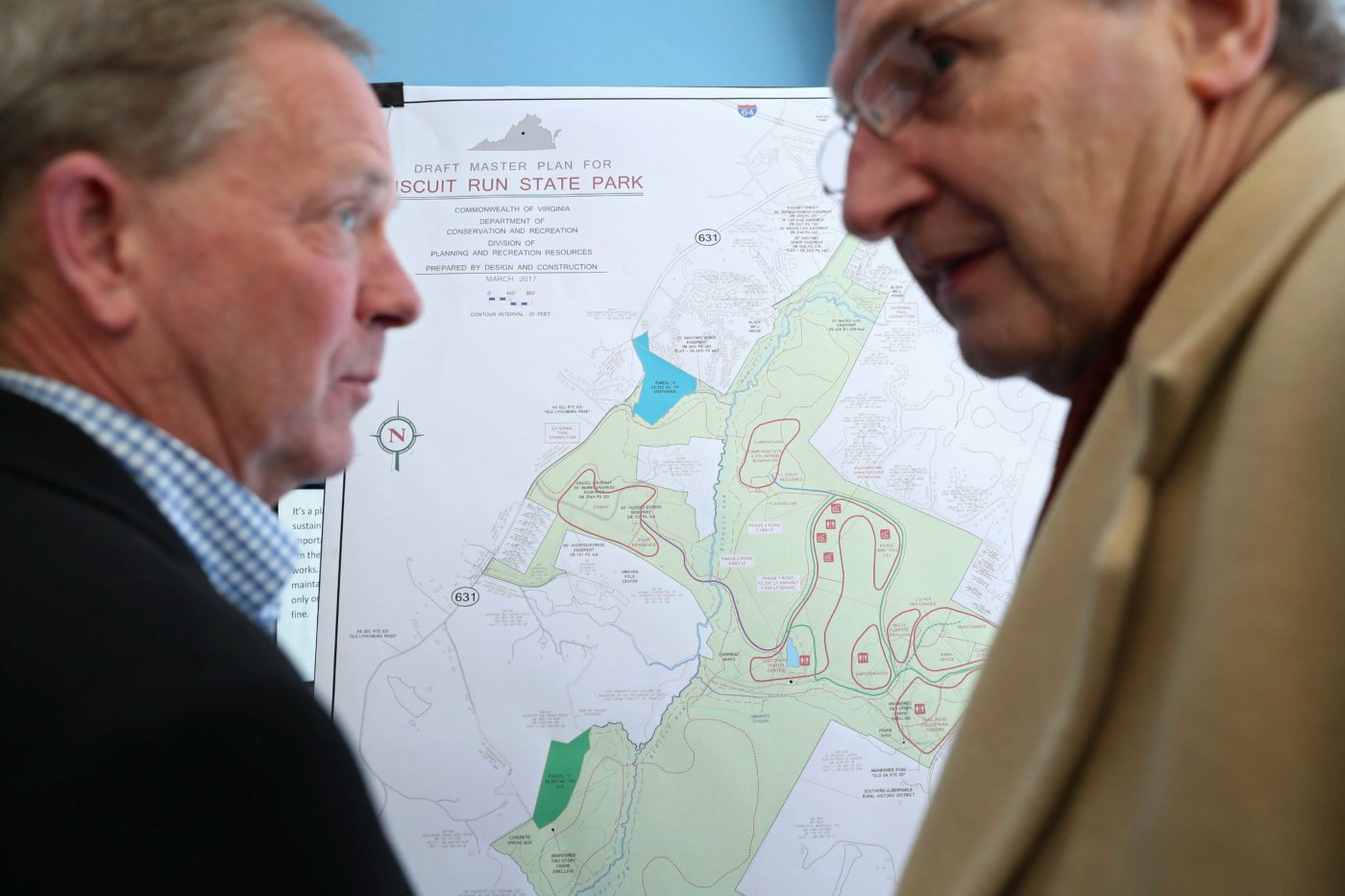 People look over plans for Biscuit Run State Park during a land exchange commemoration for the park at the Southwood community center on Thursday, March 23, 2017

Plans for both the future Biscuit Run State Park and the redevelopment of the Southwood Mobile Home Park took a step forward Thursday as Habitat for Humanity of Greater Charlottesville and the Virginia Department of Conservation and Recreation celebrated a key land exchange.

“There were a lot of things that had to come together to make this happen,” said Del. David J. Toscano, D-Charlottesville. “Every time we thought we had come up with a solution, something would happen.”

The House minority leader introduced a law in the 2012 General Assembly session that allowed Habitat and DCR officials to meet to discuss the land swap. He was on hand Thursday at a ceremony to commemorate the property transfer and discuss what it will accomplish.

Habitat purchased the 88-acre Southwood property in 2007 for $7 million and intends to develop the community as a mixed-income neighborhood while creating affordable housing so current residents can remain.

“Our bedrock principle is nondisplacement,” said Dan Rosensweig, president and CEO of Habitat. “We do not replace people or the culture that we find here. We try to enhance it and enlarge it.”

Rosensweig said the redevelopment of Southwood would not be possible if former owner Jennie Sue Minor had opted not to sell to Habitat.

“Had we not purchased it in 2007, undoubtedly, someone would have taken this piece of land and kicked the 1,500 residents out,” Rosensweig said. “A recent study by the Robert Charles Lesser Company done for the city showed that there is essentially no inventory of housing in this area for any-body who makes less than 50 percent of area median income.”

Rosensweig said Minor donated more land to Habitat so that it could be traded with the state for more favorable land. The new land that Habitat has now acquired is vacant and will allow for new buildings to be constructed to house people during redevelopment.

“The challenge at Southwood is that if you look around, the trailers cover almost all of the land,” Rosensweig said. “The idea of trying to relocate people off-site and bring them back? There’s no place to take them in this region. The idea of this land swap will make this all possible.”

The land swap idea has been in the works for seven years. About 800 acres of the Biscuit Run property is located within the county’s development area and had been rezoned for a mixed-use development that included more than 3,000 homes. However, Virginia purchased the land from devel-oper Hunter Craig in late 2009 for $9.8 million, plus land preservation tax credits.

Rosensweig approached the state early on to discuss the possibility of a land swap.

“When he showed me the parcel of land at Biscuit Run that they were looking at, we, who were planning the park, realized this was not a parcel that is significant in terms of developing the park,” said Danette Poole, director of the planning and recreational resources division at DCR.

The 23 acres that has been owned by the state since late 2009 are located along Old Lynchburg Road and are cut off from the rest of the future parkland by a creek. The 18 acres that the state received in exchange are more suitable for a park because they are not located along a roadway.

“It’s a meadow that adjoins the park already,” Poole said. “It will enable us to expand the development of trails into an area with nice views and a nice overlook.”

Habitat also will build athletic fields on its new land to help expand the number of places in the community where soccer and other sports can be played.

“The community voiced to us in the public meetings for the master planning process a strong interest in having playing fields,” Poole said. “That’s not typically something we build in state parks. That’s more of a local parks mission.”

Habitat also hopes to use some of the land to build a parking area and pedestrian links to the future state park.

“This is a tremendous opportunity for this community to have a resource like this within biking and walking distance of 100,000 people that live in our combined city-county urban area,” said Rex Linville, a land conservation officer at the Piedmont Environmental Council and co-chair of the county’s Fifth and Avon Community Advisory Council.

Linville and others are working on efforts to build a multi-use path that would connect Biscuit Run to downtown Charlottesville, a distance of four miles. He added that Monticello is three miles away. The Thomas Jefferson Planning District Commission is building a parking area and hub as part of the 5th Street Station development.

It may be some time before Biscuit Run opens as a state park. A master plan developed for the property has a cost estimate of $42 million to fully build out the park. Funding had been included in the original version of a state bond package last year but was eliminated before that legislation passed.

This year, Toscano and state Sen. R. Creigh Deeds, D-Bath, submitted a budget amendment for the state to spend $800,000 on an entrance to the park so it could be opened to the public, but it was eliminated from the final budget.

Rosensweig said planning for Southwood’s redevelopment is underway and he hopes to submit a rezoning application to the county by the end of the year.

“We don’t have a predisposed notion of what we think this place will look like afterwards,” Rosensweig said. “It’s a product of deep conversations drawing from the strengths, aspirations and vision of the people who live here.”