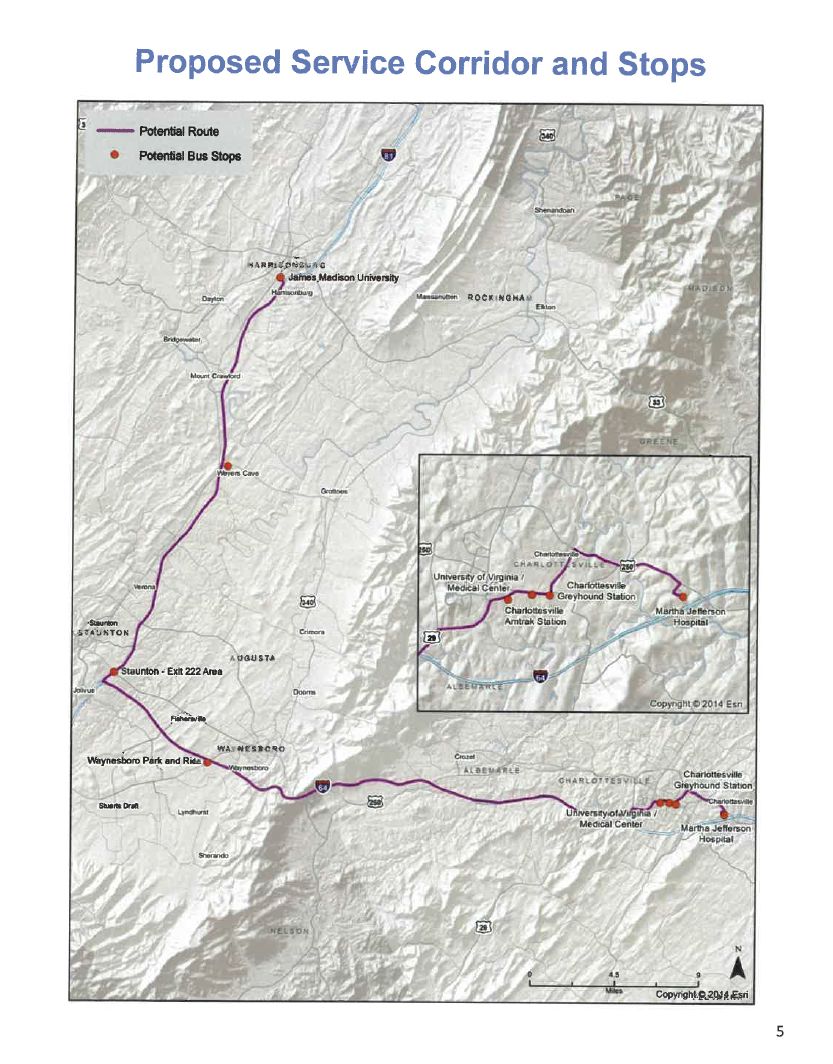 Area transportation planners are seeking support from localities on both sides of Afton Mountain for a bus service that would run between Harrisonburg and Charlottesville.

A study by the Central Shenandoah Planning District Commission proposed that the service could begin in January 2019 with a budget of $249,357 for the first six months. That would climb to $513,675 in the first full year.

About 57 percent of the operating costs would come from federal and state sources and 13 percent would be derived from $5 each-way fares. Local governments would foot the remaining 30 percent, or about $14,400 in the first full year, based on the study’s goal of 10 participating localities.

“We have a common interest in a public transportation system that will bring workers, shoppers and revelers between Waynesboro, Staunton and Charlottesville,” said Staunton City Councilor James Harrington.

Harrington is a member of the Staunton-Augusta-Waynesboro Metropolitan Planning Organization, a body that makes decisions about the future of transportation in those communities. The group met Wednesday with their counterparts in the Charlottesville Albemarle Metropolitan Planning Organization at King Family Vineyards for their third joint meeting.

“We’ve completed the study and are now in the process of taking this out to different entities, the MPOs and the various localities, to talk about the results of this study and see if there is enough funding to commit to this make it a reality,” said Bonnie Riedesel, executive director of the CSPDC

A survey found that an average of 1,257 people from the central Shenandoah area travel each day to either downtown Charlottesville or the University of Virginia Medical Center. Another 237 commuters from the valley travel to Sentara Martha Jefferson Hospital and the Pantops area.

Another 556 people make the journey the other way around to jobs at places such as James Madison University.

Projected demand for the service at full implementation is 175 trips a day. Planners also said people could use the service for more than work.

“It’s not just commuters,” said Liz Rood of the firm KFH Consultants. “We’re also seeing a demand for all kinds of people coming back and forth for a variety of different reasons.”

Augusta Supervisor Wendell Coleman said he was concerned that localities may have to pay more if ridership numbers do not meet expectations.

“If we as a local government sign on, we’re signing on and making a commitment,” Coleman said.

Rood said the service could be discontinued if ridership was extremely poor, but suggested a three-year committment.

“You have to give it a chance,” she said.

Riedesel wanted members of both MPO groups to provide direction on how to move forward.

“We’re not asking for any money today but if we were to make a federal grant application on Feb. 1, we would have to have a commitment from whichever entities participate,” Riedesel said.

“I’m definitely in favor of continuing the study and the amounts required from funding partners are very reasonable,” Harrington said.

“In the two years we’ve been doing these meetings, you’ve seen two projects that have come together that have come from this collaboration,” said Chip Boyles, the executive director of the Thomas Jefferson Planning District Commission.

One is a joint planning study of the Interstate 64 corridor and the other could lead to interregional transit.

The other regional briefing related to a study of how a 37-mile stretch of Interstate 64 between Staunton and eastern Albemarle County could be made safer.

“This project worked to identify opportunities for future projects and studies, as well as providing recommendations that can be implemented through the long-range transportation process and the Smart Scale process,” said Scott Phillips, a planner with the CSPDC.

The study looked at rail, U.S. 250 and other transportation connections.

The project was funded in part by the Federal Highway Administration to test a new planning approach.

“These processes are about fostering communication, coordination and interregional cooperation,” Hudson said.

Safety recommendations include finding a way to address slower moving vehicles at Afton and Ivy, increase capacity at some of the busier interchanges and reduce conflicts between wildlife and vehicles.

The study also can recommend ways to encourage more people to take transit.

Other solutions could include additional climbing lanes for trucks between mile markers 99 and 105 as well as between 114 and 118.

The plan will be finalized by December. The hope is to submit at least one corridor-related project in the next round of the Virginia Department of Transportation’s Smart Scale funding process.