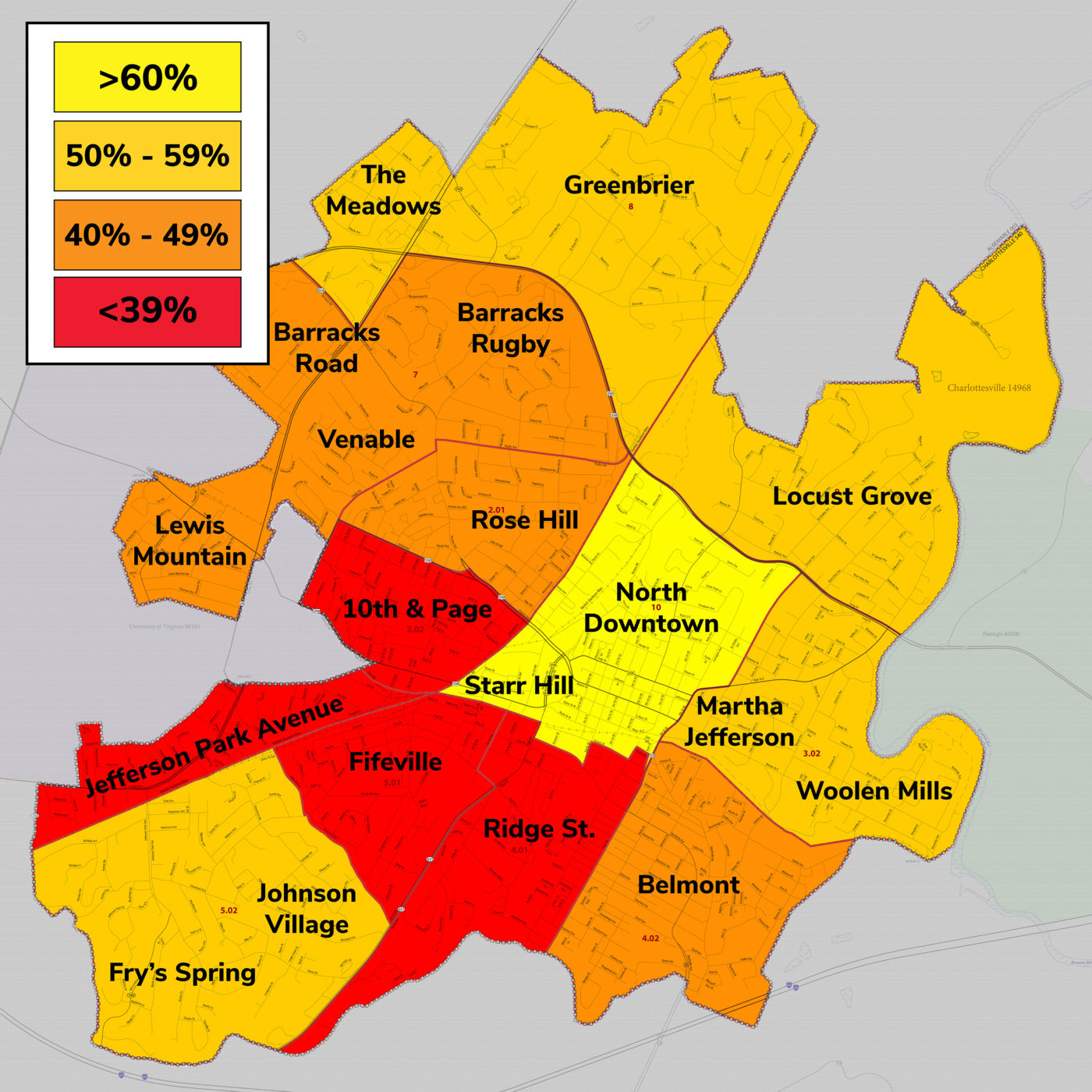 People who live in Charlottesville’s predominantly Black neighborhoods are receiving COVID-19 vaccines at a much lower rate than those who live in more white areas of the city, according to new data from the Virginia Department of Health.

The data, obtained by Charlottesville Tomorrow through a public records request, shows the number of people vaccinated by census tract. Census tracts are small areas that break up the city at nearly the neighborhood level.

The figures show that the Venable, 10th & Page, Jefferson Park Avenue, Fifeville and Ridge Street neighborhoods have the lowest vaccination rates in the city. Each is below 35%.

By contrast, North Downtown, Locust Grove, Greenbrier and The Meadows have the highest — between about 55% and 65%.

A breakdown of vaccination rates and other data by Charlottesville neighborhoods.

Some of the disparity may be attributed to University of Virginia student housing, Dr. Denise Bonds, director of the Blue Ridge Health District, said during a Charlottesville City Council meeting Monday. That’s especially true in the Jefferson Park Avenue and Venable neighborhoods, where it’s possible that students were counted in the census but vaccinated in their hometowns.

However, neighborhoods like Fifeville and Ridge Street tend to see less student housing. What these neighborhoods have in common is a higher percentage of Black residents compared to other areas of town.

Census tract 4.01 and 5.01 — roughly Ridge Street and Fifeville — have the two highest percentages of Black people in the city, according to Census data. Both also fall into the bottom half of median household incomes — though they’re not the lowest.

The trend loosely aligns with the health department’s nascent data on the racial makeup of vaccinated people. According to its most recent data, around 31% of Charlottesville’s white residents are fully vaccinated versus 24% of Black residents. The caveat with that data is that a third of vaccinated people did not report their race.

“We’ve tried to make that data available so we can better understand underserved populations and try to do some additional outreach or set up additional events in those areas,” Collins said.

It’s unclear to what extent the Blue Ridge Health District is using the information in its vaccination efforts. District officials have not been available to speak with Charlottesville Tomorrow.

The local district has hosted several vaccination clinics in predominantly Black areas alongside the University of Virginia, Sentara Martha Jefferson Hospital, the African American Pastors Council and others.

“The health department has done some targeted outreach in those communities,” Martin said. “Really early on, it was obvious that Black and brown people weren’t the first in line. So, the African American Pastors Council requested vaccines.”

The health district told the groups they could have 300 doses if they could get 300 people to register. The groups got 600.

Since then, groups have hosted pop-up clinics at Tonsler Park, Friendship Court, Westhaven and elsewhere.

“I don’t think lower vaccination rates in the Black community is surprising,” Martin said. “It is happening for a reason. But what we really need to do now is get out and talk to people and ask people why. Because another thing we’re kind of famous for doing is sitting in our offices and thinking we can figure this out without talking to people.”