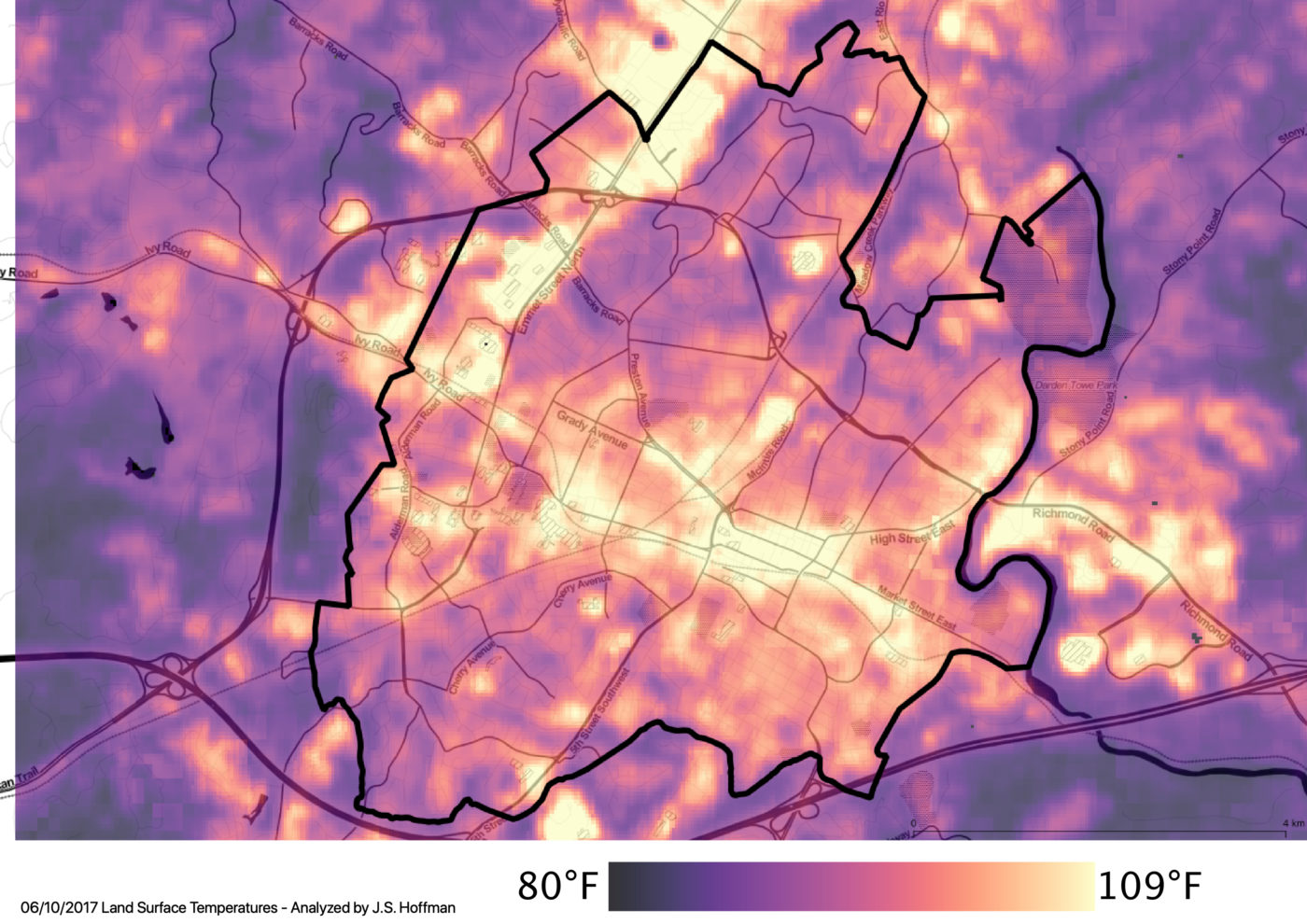 A land surface analysis shows the hottest areas of Charlottesville.

Charlottesville experienced a heat wave recently, with a record-breaking stretch of temperatures above 90 degrees and some days surpassing 100 degrees. In the midst of a pandemic that has disproportionately affected communities of color, as well as those with underlying health conditions and low-income individuals, extreme temperatures can exacerbate acute health conditions — and urban planning over time has played a role in what areas are the hottest in a community.

A recent Harvard study outlined strategies for how local communities and states can reduce the risk of COVID-19 transmission during climate-related events like heat waves, hurricanes and wildfires. And a study published earlier this year and co-authored by Jeremy Hoffman, a scientist at the Science Museum of Virginia, examined the role that housing policies have played over time.

The study focused on the heat island effect, where urban areas with fewer permeable surfaces and greenspace retain hotter ground temperatures than suburban and rural areas. In examining cities across the U.S., it found that areas which were formerly redlined show higher temperatures. Redlining is the historical practice of denying mortgages or loans for racially biased reasons and has contributed to less homeownership and generational wealth building of racial minorities.

“The consistency of greater temperature in formerly redlined areas across the vast majority (94%) of the cities included in this study indicates that current maps of intra-urban heat echo the legacy of past planning policies,” the study reads.

“By addressing the urban heat island effect, we address other aspects of climate related topics with housing, health, and economic issues as well,” Hoffman explained.

The intersection is an area of focus for Sacoby Wilson, a University of Maryland professor, who specializes in environmental health. He says that historically in the U.S., there’s been a lack of equity in zoning, planning and development.

Charlottesville Tomorrow has previously reported the role quality-constructed, energy-efficient housing plays in reducing power bills — especially for low-income families — and reducing emissions in line with regional climate goals. It also plays a role in the health of residents. 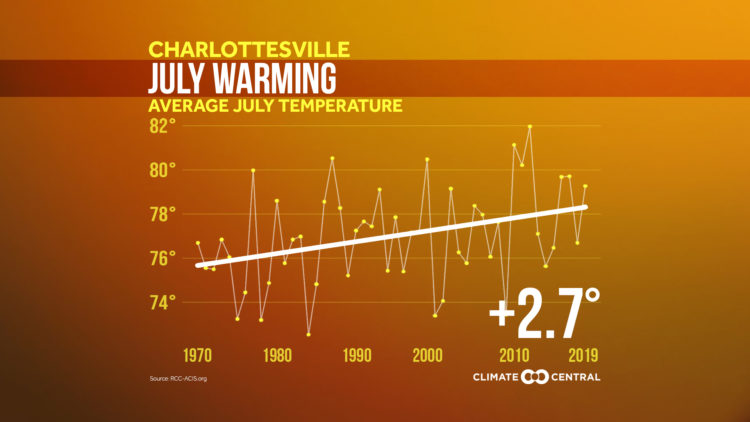 While a spike in heat is common in summer months, data from Climate Central — a scientific nonprofit organization — shows that the number of extremely hot days has increased in recent years.

“When you get back to the issue around housing and heat issues, you know that communities of color and low-wealth communities disproportionately have more impervious surfaces. We know that they are prone to be in urban heat islands,” Wilson said.

In analyzing the land surface temperatures of Charlottesville, Hoffman’s data shows the hottest areas to be in the densest areas of commercial and residential. Though density, especially in housing, has been argued to encourage more walkability and create nodes for public transportation to curb emissions, factors like the inclusion of greenspace and tree canopies can help.

City planning commissioner Rory Stolzenberg says that the commission requires that any tree canopies being removed for development or redevelopment be replaced, but notes that the replaced canopy will take time to come to fruition.

“If you tear down a mature tree, you can put a tree back that once mature will provide shade, but for the next couple decades, it will be in its youth and not provide as much cover.” he explained.

Meanwhile, the city of Charlottesville is in the midst of redoing its Comprehensive Plan that will include a zoning rewrite and affordable housing strategy. Having hired the Rhodeside and Harwell and Brick & Story consulting firms to steer the process, the strategies are in the process of being added into the overall Comprehensive Plan. The process, which began in January, is expected to transpire over two years and has been conducting virtual outreach amidst the pandemic.

As Charlottesville set goals to reduce greenhouse gas emissions by 45% by 2030 and to reach net zero by 2050, the city is also drafting its climate action plan.

“We have heard from residents who are thinking about how Charlottesville can both prepare for and work to mitigate climate change,” said Jennifer Koch, an urban planner with Rhodeside and Harwell. “ In addition to ensuring the general consideration of this in the plan, it’s an important equity consideration … not every neighborhood has an abundant tree canopy or a lot of green or permeable space.”

According to Koch, while her team’s focus is the Comprehensive Plan, affordability and zoning, her team is in connection with the city staff that are working on the climate action plan.

“It is a cross-cutting concern that will also touch on many other aspects of the plan, including housing and transportation,” she said.